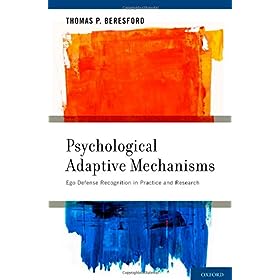 We all have them: ego defenses. Thomas P. Beresford refers to them as, “Psychological adaptive mechanisms.”

As humans, when we are stressed, we find a way to cope. This helps survive. Identifying how people do something that is such second nature can be challenging. In his new book, Psychological Adaptive Mechanisms: Ego Defense Recognition in Practice and Research, Beresford’s stated goal is “to present a simple, consistent, usable model and method [for] recognizing human psychological adaptive mechanisms.”

That said, for those in academia, as well as those with a serious interest in psychology, Psychological Adaptive Mechanisms presents a compelling argument that is well-written, well-outlined and well-supported.

The basis of psychological adaptive mechanisms is worth devoting a few lines. Beresford writes:

“As an act of life, [humans] engage in a ritual that draws them close together and itself allows for a greater range of freedom in living their own lives. In this sense, although not negating the inevitability of demise, they come to terms with it in a way that allows them to function… the ultimate goal of successful psychological adaptation is to increase adaptive options to include the most flexible, creative, and therefore most effective actions available to any single person at any given point in time.”

Early on, Beresford outlines human adaptation and explains the need for it. In the second chapter, “The Clinical Model,” he describes his unique model for recognizing psychological adaptations. Admittedly an elementary representation, Beresford presents two drawn figures: the first is a large circle, which represents “the experience of the Self.” Within the circle is a smaller circle, labeled “ego.” External to the larger circle (the Self), is “Stress,” as perceived by the ego.

The second figure appears identical yet it depicts the smaller circle becoming increasingly larger as well as elongated: “As stress perturbs the ego, it generates anxiety, defined as a sense of either impending disaster or doom.” This feeling is uncomfortable. It will not necessarily cause disaster or doom, but it can make us believe it will. In order to maintain “effective human functioning,” we must adapt. We must find a way to relieve the stress.

Occurring on an unconscious level, this is not something which most of us control. Meditation and stress-relief exercises are of use. As conscious choices, they play little or no role in this scenario.

Tracing stress back to its most primitive of uses, Beresford writes: “For humans, anxiety — that subjective sense of either doom or disaster — can be considered the subjective human equivalent of the fight-or-flight discomfort that occurs in less neurally complex organisms.”

In this sense, stress is of obvious benefit, for “were anxiety not at all present in the human…as part of his or her biological and psychological makeup, no physiological reaction or fear would attach itself to the presence” of impending disaster. Humans would be unable to survive.

The understanding the basis of psychological adaptation is vital to understand Beresford’s model as well as why and how it differs from other approaches.

As a lay person, I cannot judge Beresford’s conclusions. What I can say, however, is that Beresford’s writing is clear and understandable. Psychological Adaptive Mechanisms is an admirable book and I believe it’s safe to say its worth will not be downplayed.