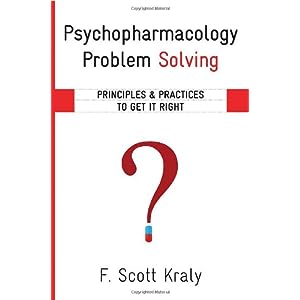 Psychopharmacology Problem Solving: Principles & Practices to Get It Right

A longstanding debate in the field of psychology is whether or not psychologists — specifically, PhDs and PsyDs who serve in a clinical capacity — should, like psychiatrists (who have MDs), be able to prescribe medication.

At present, two states permit prescriptive authority for appropriately trained psychologists: New Mexico and Louisiana, with more states on the horizon for approval. That authority is monitored under the supervision of a psychiatrist or other qualified practicing medical physician. Meanwhile, the American Psychological Association (APA), while it supports prescriptive authority for clinical psychologists, is firm in its belief that psychologists should not, as a rule, use psychotropic medication as the primary method to treat psychological disorders. A statement issued on the APA website explains:

Although psychologists have more training in the assessment, diagnosis and treatment of mental disorders than any other health care professionals, the majority of all psychotropic medications are prescribed by health care providers with little to no training. The APA Practice Organization supports the efforts of our state, provincial and territorial psychological association partners to obtain prescriptive authority for qualified, licensed psychologists to help fill the need for access to comprehensive, quality mental health care.

The idea of “comprehensive, quality mental health care” pertains to a combination of thorough assessments and evaluations, talk therapy, and, when needed, psychopharmacological intervention for clients. In short, the psychotropic drug should not serve as a replacement for a focused talk therapy regimen; instead, it should, when deemed appropriate, merely supplement the treatment process.

Although prescribing drugs to treat mental illness is increasingly common, psychopharmacology still has numerous obstacles to overcome. In his informative book, Psychopharmacology Problem Solving: Principles and Practices To Get It Right, F. Scott Kraly details some of those hurdles.

Whether the illness is depression, schizophrenia, alcoholism, or attention deficit disorder, there is a drug on the market to assist. But, Kraly, like the APA, believes that using drugs as the sole means of treating mental illness, any mental illness, is problematic.

“These problems concern more than merely unwanted drug-induced side effects — they include the use of medication that is not supported by scientific evidence,” he writes,“especially…the increasing use of medication in situations that might better benefit from nondrug therapy.”

Kraly does an excellent job describing the pharmacological aspects of some of the more popular drugs used to treat mental illness. He discusses the increasing consumer demand for certain drugs, the challenges faced by healthcare providers as a result of this demand, and his own concerns over the limited scientific research available for some popular psychotropic medicines.

Kraly also addresses the effectiveness of psychotropics on women versus men and on adults versus adolescents, as well as the potential neurological changes accompanied by prescriptions like fluoxetine, acamprosate, and lithium. He does all this in language that is accessible to both the student and the clinician.

Initially, I was skeptical of this book, largely because the psychotropic-versus-talk-therapy debate has endured for decades. I was, however, pleased by Kraly’s informative, instructional, and unbiased approach to the otherwise contentious issues of psychopharmacology. While the book is limited in terms of the mental illnesses it covers, it does attempt to address some of the most common ones and the drugs most often prescribed to treat them.

Psychopharmacology Problem Solving is a text that I will keep on my shelf as a reference tool and likely encourage my students to read. The only downside to Kraly’s work is that it is far too brief. While, again, Kraly does speak to some of the most common mental illnesses — including depression and anxiety and addiction — there are other equally pervasive illnesses that warrant examination. My hope is that in the not too distant future Kraly will expand his work and offer a similar reference for a greater range of DSM-V disorders. But even as his book in later editions may change as new studies take place, Kraly’s message on the importance of comprehensive, prudent, and respectful treatment seems like a timeless one to me.

Psychopharmacology Problem Solving: Principles and Practices To Get It Right

Psychopharmacology Problem Solving: Principles & Practices to Get It Right