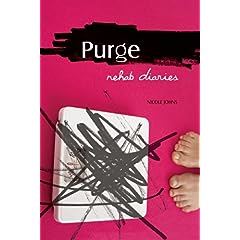 In our society, eating disorders are mostly misunderstood and glamorized. We’re told that everyone with an eating disorder is skin and bones. That just by looking at someone we can easily spot the starvation, the purging, the bingeing, carved all over their emaciated bodies. We think of individuals with eating disorders as models and celebrities, trying to reach the pinnacle of physical perfection. Their photos splashed on magazine covers create the idea that an eating disorder equals good looks and a great bod.

We’re seldom aware that eating disorders go beyond the body, to an internal aching where shaky identities, insecurities, difficulties dealing with emotions and emptiness reside. Just as we’re largely clueless about the many layers of eating disorders, we also rarely hear about recovery and fully understand how treatment works.

In Purge: Rehab Diaries, Nicole Johns dispels a slew of myths and demystifies the treatment process. Her memoir focuses on her three-month stay at an eating disorder center. Johns is diagnosed with Eating Disorder Not Otherwise Specified (EDNOS), which she describes as “an island between anorexia and bulimia, a no-man’s land that borrows from both diagnoses.”

Johns structures her book like a journal, with some chapters spanning just a page. In a fast-paced, engaging style, she documents the day-to-day of her treatment, the mealtimes, the girls who become her friends, the individual and group therapy, her lowest points and her insights and breakthroughs. Also included are copies of her medical records, the center’s rules and regulations and her therapy assignments.

At the start of the book, Johns reveals the bits and pieces that lead her to seek treatment. Her first chapter, with journal entries from 2001-2004, squashes any idea that eating disorders are pretty or painless. She writes:

2/28/03: 130 lbs. I’m focused on my plunge into bulimia and anorexia. It’s been a hellish past few months in that respect. My hair is falling out, my nails are a mess, I’m dizzy, and I’m on the verge of passing out a lot. I look like shit, except that I’m thinner, and everyone notices and compliments keep rolling in the more I drop. I need the muscle spasms and irregular heartbeat to stop.

2/11/04: I feel like I’m going to pass out. I’m eating two candy bars. I feel like I’m losing my mind. This is madness. Since I’ve eaten these two candy bars, I’m only allowed salad tonight. I have my life all together, except for this. Maybe I should purge these candy bars. Now I want a muffin. I just want to go to bed, but I can’t sleep anymore.

How interesting that thin is always seen as beautiful and healthy, even when a person is struggling to stay alive. People still throw tons of accolades at the author — praise that’s so potent and intoxicating, like after you’ve been throwing up for days from the flu, and everyone thinks you look radiant at your newly reduced weight.

In the next chapter, Johns describes the nitty-gritty of having an eating disorder, quickly gutting any assumed glamour:

An eating disorder is driving to a gas station in the midst of a blizzard and writing a bad check to buy dozens of stale donuts because they are being sold at the day-old discount price and you are ravenous because you have been starving yourself, again. Your car gets stuck in the middle of an intersection, your tires churn up wet snow, you’re going nowhere as you cram doughnuts into your mouth, sugar circling your lips and chin, granules of sticky sugar on the steering wheel, and you don’t care that there is oncoming traffic, the light is about to change, and the tires are spinning…

Back at the apartment, your right hand is slick with saliva, mucus, and chunks of wet doughnut. Your eyes water and tears roll down your face and land in the toilet bowl, mixing with the doughnut remains. There is a splash-back effect as the doughnut pieces hit the water. Toilet water splashes your face but you don’t care, because all you can think of are calories, fat grams, did I get it all out? …

An eating disorder is bingeing on a salad with fat-free dressing in the student union, running up three flights of stairs to a seldom-used bathroom, and pausing to look in the mirror before going into a stall. Eyes are ringed with circles, lips are chapped, there’s a scar on your right knuckle from where your teeth scrape when you shove your fingers down your throat. You are pale. You retch away, the acidic salad dressing burning your throat and mouth; wilted brown lettuce coated with a sheen of bile glides back up your blistered throat.

Johns tackles many myths in Purge. These are some of the highlights:

Johns has crafted a raw and riveting memoir. She doesn’t glamorize eating disorders. She’s honest about the ups and downs. For individuals with eating disorders, some of the content may be triggering, though Johns doesn’t glorify eating disorder behaviors. Quite the opposite, she shows them for what they are: debilitating habits that offer only short-term relief but slowly chip away at the core of the individual and leave behind scores of scars, both physical and mental.

However, Johns’ book is not a bleak read. After experiencing setbacks and relapses, she does recover. Recovery is a tough road that requires hard work and is a continuous process. But the destination is reachable. Johns has been in recovery since 2005.

At the end of the prologue, Johns explains why she wrote Purge:

In conclusion, I wrote this book to inform the public, counteract myths surrounding eating disorders and treatment, and provide eating disordered individuals with hope.

I think she accomplishes all three.

Solitaries: Who They Are and What They Offer