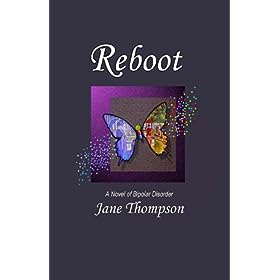 After my girlfriend, whom we will call Elle, had her first full-blown manic episode, I began to read several books on bipolar disorder. These included books on medications and the use of ECT (electroconvulsive therapy), which Elle received after being involuntarily committed by her parents. In her manic states, typically after several days with little or no sleep, she would often end up getting arrested, thrown into jail—and, when the police realized her state, put in a mental hospital.

Given my relationship with a woman experiencing the disorder, Jane Thompsonʼs Reboot: A Novel of Bipolar Disorder resonated quite strongly with me. Thompsonʼs book offers a fictional but true-to-life account, with her writing clearly based on her own struggle with the illness.

What struck me most is how Thompson reveals, in detail, the importance of what took me years to learn: that, due to the very nature of bipolar disorder, the person who is bipolar does not recognize this and may often forget or highly distort what happens in their manic state. In their euphoria they may imagine and remember, quite incorrectly, that everything was oh-so-wonderful, which is often quite far from the case. Particularly for an adult with bipolar disorder, recognizing the illness is a key step in the possibility of regaining stability and mental health. Without this recognition, an adult with bipolar disorder may quit taking medication, not prepare for the next manic episode, or put themselves and others at risk.

In the beginning, we find this lack of recognition in Marie, the protagonist suffering from the disorder and whose story parallels the authorʼs (and my girlfriendʼs). Marie misses appointments, remembers meetings cancelled when in fact, they had not been, and loses friends who seem standoffish to her. Before her treatment, she only dimly understands why her actions are irrational, rude, or possibly hypersexual.

What makes Thompsonʼs book so fascinating and hopeful is the contrast between Mariaʼs lack of understanding before she realizes that she is bipolar and her later recognition of what was more likely going on when she finds a medication that works for her.

“Reboot” details another important facet of bipolar disorder. While it is defined as a psychiatric mood disorder with disruptive mood swings, characterized by one or more episodes of abnormally high energy levels, accompanied by racing thoughts and euphoria, with or without depressive episodes, no one truly knows what causes it and what can stop it. Treatment and medication are thus experimental. In the book, Marie takes several different medications with no apparent effect. After reporting this to her physicians, she is told that the medications will eventually work, or that she doesnʼt realize that they are indeed working.

Thompsonʼs novel also correctly illustrates the dangerous side-effects of these medications. Marie is advised to take Haloperidol, which could lead to tardive dyskinesia, i.e., involuntary repetitive body movements, and is told incorrectly that she is not old enough to develop the symptoms. My own reading of the dangers of such medications had me worry when my girlfriend Elle, at about the same age, temporarily developed a habitual puckering and pursing of her lips after taking the many medications, including Haloperidol, that she was prescribed. For both Marie, in the novel, and Elle, in my own life, therapy is trial and error. One hopes to find a treatment or medication that works.

Without giving away the bookʼs lovely ending: Marie finally finds a drug that works for her. As her moods stabilize, so does her life. She gets a significant raise at her job of several years, makes friends, and begins to enjoy going out. She starts to feel appreciated for who she is, and is happy.

I wiped tears from my eyes and broke out laughing several times as I read “Reboot.” For those of us who are close to someone suffering from bipolar disorder, this book means a lot.