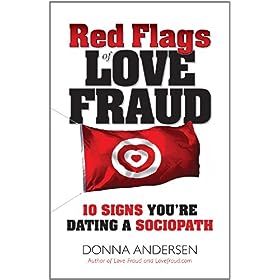 Red Flags of Love Fraud: 10 Signs You're Dating a Sociopath

Donna Andersen started LoveFraud.com after her former husband drained her of $227,000, cheated on her, fathered a child outside their marriage, and remarried 10 days after their divorce was finalized. The website, which was created to warn others about the dangers of love frauders, was the impetus for Andersen’s book, Red Flags of Love Fraud.

The basis of Red Flags is that some people—more than we typically assume—are sociopaths, and if we are not careful to educate ourselves about their potential dangers, we are all capable of being victims of, as Andersen calls it, love fraud.

Andersen is quick to caution that the word “sociopath” is not meant in a formal sense, as a medical professional might use it. It is instead used “as a generic description for a social predator, someone who lives his or her life by exploiting others.” Although Andersen does provide a solid amount of psychological background on sociopaths, the fact that she uses the word in a way in which it is not supposed to be used is rather curious. By painting overly broad strokes, Andersen runs the risk of oversimplifying and writing in absolute terms when doing so is inappropriate.

As Andersen writes: “Sociopaths are male, female, old, young, well-groomed, disheveled. They come in all shapes and sizes.” In this way, it is frustrating that Andersen chose to cast the term that is the basis of her thesis as something of a catchall.

This is not to devalue the merits of Andersen’s book. While her subject is not widely known, it is indeed interesting and worthy of analysis. That said, when dealing with a subject that is so psychologically complex, it is counterintuitive to make the foundation so simplistic.

There are a lot of good things in Red Flags. Often, though, general themes and ideas are restated in different ways, and the same advice and wisdom is recycled. Again, what is said is certainly interesting and noteworthy, but the constant restating diminishes the impact of the ideas and negates some of their legitimacy. It’s not so much what is said that falters, but how it is said.

Along these lines, another criticism of Red Flags is its implicitly anti-male tone. Admittedly, Andersen does cite a statistic that men are three times more likely to be sociopaths than are women, and, as evidenced by the quotation above, she does concede that women, too, can be sociopaths. But of the numerous examples Andersen includes throughout the book, only a handful portrays a woman as the sociopath instead of a man.

Moreover, of the almost 250 pages, Andersen spends only two discussing female sociopaths. Despite the fact that men are statistically more likely to be sociopaths than are women, it would have been prudent to dedicate more text and examples to women being the predator. To not do so comes off as a something of a covert attack on men.

Despite these criticisms, it must be noted that Red Flags does provide some useful information. Through her website, Andersen has heard from and communicated with thousands of people who were, like she, victims of love fraud. And in the modern age in which we live, many of these relationships were started through online dating websites. Andersen writes:

Because of its global outreach and anonymity, the Internet is custom-tailored for social predators. It offers an endless supply of potential victims, so the hunt is simply a numbers game. Sociopaths register on multiple dating sites simultaneously. They randomly friend people on Facebook. They just keep baiting their hooks until someone bites.

Anonymity is a core characteristic of the Internet. When communicating via the web, you never really know with whom you are talking, and sociopaths use this to their advantage, pretending to be anybody they want.

Approximately one in five relationships is started through online dating. With the medium continuously gaining popularity and appeal, Andersen is right to caution against blind faith in it. While online dating is without question a useful—and for some, necessary—tool, it should be approached with a certain level of caution, especially when someone whom one is talking to fits Andersen’s bill of a sociopath.

Although Red Flags of Love Fraud is perhaps not as academic as it should be, it is nonetheless informative. It is certainly flawed, but it is also prescient: Considering how many people are victims of love fraud, not nearly enough are aware of its realities. Andersen’s book is a good first step.

Red Flags of Love Fraud: 10 Signs You're Dating a Sociopath