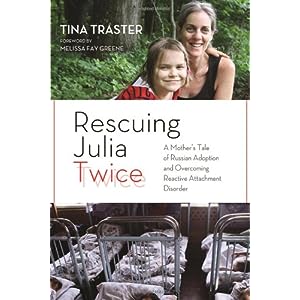 We make a lot of fuss over book covers, don’t we. Whether they look cheesy or slick. Whether the publisher is trying to get us to purchase something old repackaged as something new. And, of course, whether we should judge by them or not.

About titles, though, there’s less discussion. Which is why I was surprised that the title of a memoir — even one whose subject matter interested me — could make me recoil.

While author Tina Traster meant to write about maternalism in the way of motherhood, her title made me worry about paternalism — as in, thinking you know better than another population and controlling them to “save” them from their ways.

But let’s take a step back. Traster, a New York–based journalist, writes about her desire to have a child — a daughter — and her frustrating inability to do so naturally. She and her husband realize that they aren’t equipped to go through the painful and risky process of in vitro. So, instead, they go through a Kafka-esque adoption process: navigating the Siberian government to take home a little girl.

Traster describes Siberia as cold, in terms of both the weather and the bureaucracy. After two long trips, many confusing steps, and inexplicable government limits on their whereabouts, she and her husband have their moment. They lift tiny Yulia out of a crib, one in a room teeming with unwanted children who have never been outside, or seen the sun, or felt love. They witness the sterile, unfriendly conditions in the orphanage. How even the most well-meaning of staff cannot possibly have enough hands or time to attend to the basic feeding and cleaning needs of each baby. Finally, noting all of this, they whisk Yulia, whom they rename Julia, back to New York.

A rescue of sorts. A swooping in, a saving.

But that doesn’t mean it’s appropriate to frame the whole story that way.

The word “twice” in the title refers to how Traster and her husband helped Julia not just break free of an unhappy, understaffed orphanage, but also how they helped her begin to repair herself from psycho-emotional trauma.

Julia, Traster realizes over the first few years, has an attachment disorder resulting from early neglect. At orphanages where children at their most vulnerable and biologically needy stage of life don’t actually get what they need, she learns, those children can develop life-long emotional, social, and behavioral issues. They have trouble bonding with other people, even those who raise them and bathe them in love. They are often combative, sometimes almost violent, and cannot make eye contact much of the time. They do not trust anyone, because they learned early on that adults are not trustworthy. They are, as Traster puts it, never at peace.

Traster describes the wrenching feeling of trying to bond with a baby when that baby has already given up on the world. She conveys how awful, how frustrating, how full of despair, even how embarrassing. She effectively shows that it is frightening and almost maddening when your tiny infant does not respond to your affection.

And she describes how, without her and her husband’s hard work, these troubles, this attachment disorder, would have probably been impossible for Julia to overcome. Hence, I suppose, the second rescue.

Still, as I reached the middle of the book, the title kept bothering me. I did a quick search to see if anyone else took issue with it, and an adoption blog immediately popped up. The blogger, an anonymous Chinese-American adoptee, had posted a scathing, well thought-out review. Less a review of Rescuing Julia Twice, however, and more a review of Traster’s entire adoption-related oeuvre: her articles, plus her own blog and website.

“Without reading the book,” the blogger acknowledges, “I cannot critique it. I can only discuss what I know. I know that I am immediately disgusted by the title.”

Later, the blogger writes, “The ‘rescue’ narrative allows Traster to seek public approval for being altruistic or self-sacrificing and diminishes Julia’s role to a secondary character in her own story. I am adopted. I am Chinese-American. I am a blogger. I am so many things, but rescued is not one of them.”

That’s powerful: a reader’s take on the issue based on personal experience as a foreign adoptee. And although the blogger may not have read Rescuing Julia Twice, so turned off was she by the title, she goes on to analyze Traster’s journalism related to Julia. Everything disgusts her. The commodification she sees of the little girl from Russia. The way that Traster elevates her own parenting as if she is a magical savior and Julia is just “feral.” (Indeed, that’s the term Traster often uses to describe Julia and her behavior. I understood that the Traster was trying to show just how depraved Julia, an infant, seemed, but the word gave me pause, too.) The blogger also refers to places where Traster paints Julia as an “accessory,” then ends her review on this very pointed note:

Perhaps one day, I will be in Barnes & Noble, and I’ll glance up and see a book by a young woman named Julia Tannenbaum titled, Surviving Tina Traster: A Russian Adoptee’s Tale of Overcoming Exploitation and Self-Promotion by her American Mother. I look forward to that day.

Clearly this blogger, by reading articles by Traster if not the actual book, senses what I sense. Given that I have read the book, however, I can also see, underneath what made us both recoil, the reality that Traster was trying to show.

She wanted others to know that what Julia and she were up against should not go unspoken. Traster gives examples from the news of adoptive parents who were too embarrassed and uninformed about this disorder to tell anyone. These parents, we are shocked to find out, in fits of despair, end up semi-accidentally killing their adopted children. Traster does not want to be one of these parents, she assures us, but she understands where their evil-seeming behavior stems from. She wants to show us that they are not necessarily terrible people but people put in terrible situations: no honest medical information from the orphanages, and a child who behaves almost as if possessed.

Traster wanted to show that there’s an epidemic of orphaned infants already too “damaged” — a word I hesitate to use — to become healthy children and adults. That a child’s ability to bond with other people and thus function in society can be burnt out by the time she’s six months old.

What the blogger didn’t see, by not reading the book, is that Traster shows surprisingly low self-esteem. She’s not smug about rescuing anyone, but instead quite candid about her own failings. She describes herself as flailing about, trying to understand why her daughter doesn’t care about other people, can’t look anyone in the eye, can’t be at peace even in the loving arms of her parents. She admits that she is frightened by, and wants so much to help, Julia’s emotional instability. She writes that for years she assumed her parenting must be terrible — that it was her fault Julia was behaving this way. In the end, her book is not as self-aggrandizing as the title suggests. In fact, it is often the opposite.

Despite all this, however — despite that I can make out Traster’s intention — I still side with the adoption blogger. Traster may mean well, but she conveys a harmful white-savior attitude — and, too, exposes information about her “feral” and “difficult” daughter that might haunt Julia her entire life. One quick google search and any future employer or romantic partner will find out about her psychosocial issues. This might not be bad enough for Julia to write a book about being exploited by her mother, but it doesn’t seem loving or responsible for an adult to do to her child.

My wish, then, is that Traster had written a different version of the same book. That she’d conveyed the importance of helping children who were neglected as newborns, and explained the hardship of trying to raise a kid who is already troubled at six months old. But that among all this, she’d included more about Julia as a real person, not just a symbol or a problem or a crazy unstable thing that had to be tamed.

And my other hope? That Traster didn’t realize what she was broadcasting. Her book, after all, did teach me aspects of social development and adoption that I hadn’t known before. She just should have thought twice about her message.