Reviews Home » Resilience: How Your Inner Strength Can Set You Free from the Past 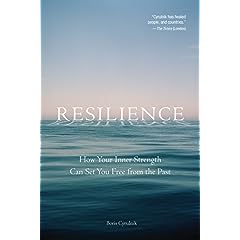 Boris Cyrulnik is a renowned neuropsychiatrist and psychoanalyst, director of teaching at the Faculty of Arts and Social Sciences at the Université du Sud, Toulon-Var, France. At the age of 5, he lost both of his parents when they were deported to a World War II concentration camp, never to return.

In Resilience: How Your Inner Strength Can Set You Free from the Past, Cyrulnik speaks of those he has worked with who grew up as orphans, were abused or forced to fight in wars and who later transformed their lives through resilience to emerge as remarkable individuals.

Cyrulnik discusses studies done in neuroscience, psychology, and genetics supporting the idea that resilience — the positive capacity of people to cope with stress and adversity — can provide the basis through which people subject to childhood trauma can later become socially integrated and highly successful. As Cyrulnik says in providing a definition, “To put it more simply, resilience is a sweater knitted from developmental, emotional, and social strands of wool. That is why it is more helpful to describe the history of a resilient personality.  We can then try to understand how it dodges the strokes of fate and still contrives to use solid supports in order to knit itself.”

He later writes, “The purpose of this book was simply to say that there is such a thing as resilience.  Resilience has a form, and there is a price to be paid.”  Resilience: How Your Inner Strength Can Set You Free from the Past is a heart-opening, brilliant work of hope and understanding.  The book is written for all of us, because, as Cyrulnik says, “… we are all resilient and because none of us has the good fortune to avoid pain completely.”

Psychological resilience, the dynamic process that individuals exhibit positive behavioral adaptation when they encounter significant adversity, trauma, tragedy, threats or even significant sources of stress, has had research findings published since 1973. What is outstanding in Cyrulnik’s Resilience, and used as criteria in measuring it, is both his revelation of otherwise uncovered statistics and his many personal stories describing resilient individuals.

Cyrulnik begins his introduction with, “Misfortunes are never wonderful. But when an ordeal does come, do we have to succumb to it? And if we fight it, what weapons do we have?” Cyrulnik points out that resilient children, undergoing trauma, often begin to use an internal defense mechanism at an early age.  This may involve the splitting of the ego into a socially acceptable and a more hidden, unspeakable side that, while held secret, nonetheless reveals itself in roundabout ways. The hidden side spurs the development of the imagination and abstraction.

“Abstraction forces us to discover the general laws that allow us to defeat or avoid our enemies, whereas the absence of danger induces intellectual numbness.”

But splitting, while arising with the development of dreams and abstraction, also suffers the cost of keeping the individual from being whole, with all of the resulting, often chronic stress.  Healing comes usually long after childhood, when the individual can later “knit” his or her own personal story meaningfully into the social and cultural story of the given place and time.

Cyrulnik explains, “Any memory is a dialogue between what our environment has implanted deep within us and what we want to reveal about ourselves to others. A story is a verbal representation that recounts a series of significant events. Telling our story creates a coherent feeling of selfhood.  It reconciles the two parts of the divided ego. The socially acceptable ego can at last tolerate the secret ego that cannot be talked about. The subject can at last talk about himself and express himself as a totality.”

Resilience does more than fulfill the purpose Cyrulnik stated for writing his book, which is simply to state that resilience exists. Cyrulnik shows that ”… the feeling of selfhood, which is shaped by the gaze of others, can be reshaped and reworked by representations, actions, commitments, and narratives.” While resilience is a defense mechanism, it is more conscious and more malleable than other defense mechanisms and can thus be shaped and reworked to bring us happiness.

It is through retelling our own personal stories that we reshape our feeling of selfhood and develop our own resilience.  Resilience reconciles the two parts of the divided ego, until the subject can at last speak of herself as a totality.  Cyrulnik’s masterful retelling and examination of stories shows us that not only may tragic circumstances not destroy us but can in fact be the basis from which we may blossom.

APA Reference
Stoeckel, M. (2016). Resilience: How Your Inner Strength Can Set You Free from the Past. Psych Central. Retrieved on July 4, 2020, from https://psychcentralreviews.com/2016/resilience-how-your-inner-strength-can-set-you-free-from-the-past-2/