Reviews Home » Rethink How You Think: How to Create Lasting Change Today 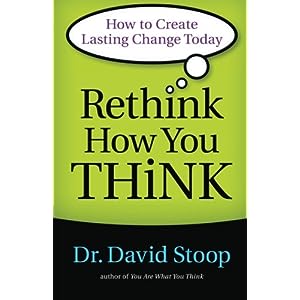 For a science-informed book on self-improvement, Rethink How You Think can be both illuminating and confounding. The primary reason is its splicing of science and religion: two camps perennially at odds. However, this is not the kind of book that has been somewhat in vogue the past few years, a pop-science look at religiosity versus atheism, for instance. Rather, it is a book put out by Revell, a division of Baker Publishing Group. According to its website, Baker “publishes high-quality writings that represent historic Christianity and serve the diverse interests and concerns of evangelical readers.”

Understandably, then, your attitude and religious beliefs will inform how you react to the text. That said, even if you don’t count yourself among the evangelical readers that author David Stoop is aiming for, you will find that Stoop, a clinical psychologist and director of The Center for Family Therapy in Newport Beach, California, has done his research in neuroscience and cognition and presents his findings cogently.

At first, Stoop offers a satisfying dose of science, including discussions on ego depletion and deepening neural pathways. He mixes in religion, but in Part 1 of the book the religious aspect is presented as an afterthought following the science. For instance, Stoop first describes the brain’s functions textbook-style, then attributes them to God’s design. He explains how the brain changes when we create habits, then mentions that he’s trying to live according to God’s word. His faith is there, but not the main show.

Then comes a shift in Part 2.

I’ll admit I was quite surprised when I started the second half of the book. Here, as the text switches from science lessons to advice on “how to create lasting change today,” per the title, it also switches to being primarily about religion. This, I think, is where most opinions will diverge on the book.

Stoop writes, for instance, that children of fearful parents may become fearful adults themselves because of their mirror neurons. At that point, the science-seeking reader might expect a subsequent discussion of, say, systematic desensitization. Stoop, however, recommends that the reader meditate on a message of the Scripture — that you should not fear, because God will protect you.

If you are a religious Christian or are open to Biblical guidance, then you may appreciate that Stoop goes in this direction. Among the problems he tackles are loneliness and anger, which he writes about with a friendly, gentle, and engaging style, if a heavily Biblical one. He relays stories of those he’s worked with as a psychologist and how renewed faith helped them become happier individuals.

And regardless of a reader’s faith or lack thereof, many of Stoop’s suggestions for living a better life are both sensible and uplifting. Balance negative experiences by remembering the good things in your life, he writes, and practice random acts of kindness. Those are excellent habits to acquire, no matter what.

My favorite chapter was one titled “Moving from Anger to Forgiveness.” Here, Stoop’s warnings of how bitterness can harm your health are enough to convince you to let go of it. And by forgiving someone, he writes, we harvest a spirit of gratitude through God’s peace. But even if you don’t believe in a god, science approves, too: Studies have shown that habits of gratitude are associated with better health and less anxiety.

In the end, Stoop’s book is for a very particular audience, not for the average reader interested in psychology or habit-changing. But if you live by Evangelical teachings and want to learn about cognition and neuroscience through that lens, Stoop may be a great place to start.