Reviews Home » Ride of Your Life: A Coast-to-Coast Guide to Finding Inner Peace 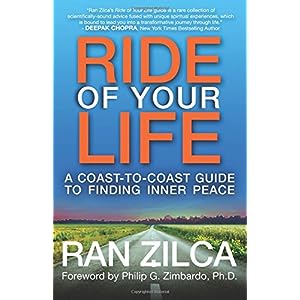 Cheese-less-ness: That rare quality to look for when you come across a memoir-based self-help book. Not something sodden with exclamation points, or empty metaphors, or cringe-inducing levels of wistfulness, but a book that’s both interesting and useful.

To my relief, Ran Zilca’s Ride of Your Life is one of the few I’ve seen that’s engaging and helpful — and without too much Velveeta.

Zilca, a research scientist who helped create a genre of mobile apps that aid in behavioral intervention, and who is also a Psych Central blogger, writes about motorcycles. And riding alone. His book chronicles the thirty-four day trip he took across the States in 2010 on a bike he learned to ride expressly for this midlife adventure.

And, because, as Zilca puts it, he’s lucky to work with “some of the most famous experts whom a person could consult on a soul-searching journey,” he also arranged to meet folks like the well-known Phil Zimbardo, Sonja Lyubomirsky, and Deepak Chopra along the way.

The book is very different from a literary memoir, and so a bit different than what I’m used to: memories woven together, things out of order, a meticulously constructed narrative. Here, instead, we get a strict chronology of the trip, each part broken down into a tiny, three-page chapter. It’s a day one, day two, day three sort of affair.

Turns out, that’s actually helpful. We see, this way, the arc of the actual journey, not the rehashed version: the experiences, worries, problems, and small triumphs Zilca encounters each day. Because the book is not just a memoir of an epic ride through rain and mountains and desert but also a guide for the reader, the format is made to be user-friendly. Although its simplicity and day-by-day chronicle surprised me, it worked.

On days where Zilca meets one of his famous expert friends to talk big concepts like inner peace and the ills of humanity, he includes a short Q&A with them, then returns to the day-by-day narrative.

And although topics like inner peace and the ills of humanity leave much room for maudlin sentiment, Zilca avoids it for the most part. He writes in a straightforward, almost conversational style about what he’s feeling each day of the trip.

On his first day riding, for instance, Zilca sees a great viewing spot on a hill. But in his excitement, he forgets to push down the kickstand when he stops. “It’s too late,” he writes. The motorcycle falls over, and it’s far too heavy for him to lift back up on his own.

“I stand and stare at it helplessly,” he writes, “lying on its side, with a little puddle of oil accumulating next to it, like it’s been shot.”

The man is on his first day of a motorcycle ride across the country and he already feels a bit defeated.

Zilca waves at oncoming cars for twenty minutes, he writes. Finally he gives up and asks someone at the gas station across the road for help. But the man who agrees doesn’t seem to think Zilca will be okay. “Looks like it’s gonna be a rough ride,” he tells him.

Because this is a book about finding inner peace on your own, Zilca might be playing up his worst moments in order to make the best ones shine brighter in comparison. It’s useful to read about his insecurities, and how small issues on his ride have throw him off. But one does wonder if the author of a book like this emphasizes his own vulnerabilities and struggles in order to pull the reader in.

After all, if you’re trying to help others lead happier, more peaceful lives, perhaps you need to commiserate even more on the hard stuff — perhaps you need to let readers know they’re not the only ones struggling. So, maybe it’s just how Zilca really felt each day of his trip, or maybe he is indeed emphasizing the harder times in hindsight. Either way, he avoids overdoing it, whether it is a writing device or the real deal.

Plus, although the book thankfully eschews a cheesy, overly positive attitude most of the time, many of the struggles Zilca shares end up leading to something good: A moment of pride, for instance, after he gets the guy to help lift the bike, then repairs the mirror himself. Or when he realizes that although he’s scared to ride on a rain-slicked road for the first time, he’s able to do it safely, and his concentration even helps empty his mind.

Again, it could be a device, but Zilca reflects on these rougher moments in a way that still feels genuine. He made himself relatable, and I appreciate that.

There are some nice details, too. A bee that flies into Zilca’s ear as he’s riding out of Yosemite National Park; a woman’s missing and rotted teeth at a gas station in Arizona.

Here, again, Zilca shows his humility, and his humanness, to the reader. He writes: “The expression on her face is calm and pleasant, but when she turns to me and speaks, I gather all my energy to avoid showing the repulsion at the sight of her mouth. Some of her teeth are missing and others are decayed or discolored.”

As an author trying to show all of himself, the gut reactions as well as the inner peace, he continues. “The contrast between the sight of her mouth and her young, friendly appearance is unbearable. Nausea hits my stomach. After paying of walking outside, I take big gulps of the crisp mountain air to recover.”

Reading that passage, I appreciated Zilca’s honesty. In general, as he describes lush greenery and funny looking cacti and the folks he learns from at motels, I continued to appreciate his candor and ability to self-examine.

The only jarring flaw in the book came toward the end. I’d been enjoying Zilca’s tales of what he observed each day — both what he saw externally, as well as within his own emotional universe — and I’d been absorbing some of his advice.

Then came page 154: “Midlife Men and a Word of Advice to Women.” The chapter’s title — from day thirty of the trip — worried me a bit. I read on. In less than a page, Zilca summarizes some notions about the typical man who goes through a midlife crisis, and how he “seeks the actions that will replenish the strengths that he had as a young man.”

The idea, he says, is that physical labor can help — whether it’s cleaning a motorcycle while on a ride or, as the writer Steinbeck puts it, “lifting, pulling, and chopping.”

Zilca forgets that women, too — people of all genders, in fact — benefit from physical labor, from moving their bodies in a productive way. We all, as we age, like to do things that remind us of being younger, and that remind us of our own strength.

The end of the very short chapter reads: “My humble advice to women whose partner is a man of a certain age is this: Encourage him to get a quality toy that comes with a variety of positive activities. Polishing, fixing, greasing, and riding are your man’s way of sharing his feelings.”

The problem is this: I may not be a man, but don’t I deserve a toy and an invigorating adventure, too?

As a female reader, I’m just as excited about going on journeys and about feeling strong and vital as I age. But unfortunately, with this one passage, Zilca alienates his non-male readers. And the sad part is, until this point, I’d been with him the whole time. I’d been excited to read more about his rides in the rain and his mountain climbs and small victories. All the while picturing myself on an adventure, too.

Some may think midlife crises are all about men, but that’s a trap. Humans of all kinds and genders need a boost — and it isn’t just males who want to feel young and independent and strong.

Still, I’d like to think that this was a well-meaning error on Zilca’s part. Overall, his book remains a fun read, an educational read, and a read that may get you thinking about change and self-reflection. Just remember that, whoever you are, you can sweat and use your strength and embark on meaningful adventure, too.