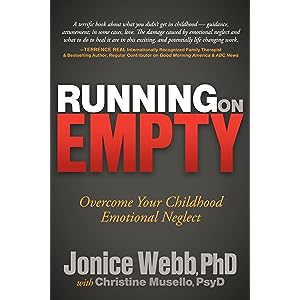 Sometimes one has the pleasure of reading a book that provides genuine insight and discusses a concept previously unnamed. Running on Empty: Overcome Your Childhood Emotional Neglect, by clinical psychologist Jonice Webb and contributor Christine Musello, was one such book for me.

It is no secret that I consider many self-help books questionable, or, at best, critically lacking in essential elements that could potentially aid a reader, but what Webb does is worthwhile. She describes the contours of a new concept she terms emotional neglect: how the environment we grew up in might have harmed us not through abuse but through what key elements were lacking in our childhoods.

Anecdotes and peer-reviewed research have, for years, demonstrated that parenting styles greatly influence adult behavior later in life. However, examples in the literature are usually of children who were in fact abused, overtly neglected, or given up — and the outcome is often, but not always, one that yields an emotionally unstable adult.1

Webb’s focus here is not on the physically or sexually abused or abandoned child and how they might recover from that trauma. Instead, Webb proposes that what does not occur during childhood can be equally damaging as what we consider trauma.

In defining her concept she writes, “Pure emotional neglect is invisible. It can be extremely subtle, and it rarely has any physical or visible signs. In fact, many emotionally neglected children have received excellent physical care. Many come from families that seem ideal.”

Webb goes on to explain that what she explores “dwells in the sins of omission, rather than commission; it’s the white space in the family picture rather than the picture itself. It’s what was NOT said or observed or remembered from childhood, rather than what WAS said.”

So who is Webb speaking about, and what types of issues would such a person experience? The questions that frame Running on Empty include: Do you feel dissatisfied or disconnected (a sense of not belonging) in your life? Do you pride yourself on not relying on others or asking for help? Do you often feel disappointed in yourself and judge yourself more harshly than you judge others?

At first blush, these questions might make you think of someone we would diagnose with depression. But upon closer examination there’s something more subtle yet equally disconcerting at work. The dissatisfaction or disconnectedness that Webb describes is not the type that leads to debilitating clinical depression or even an occasional bluesy setback. Instead, it is a continuous sense of feeling apart from others, like you do not belong and are unable to connect, and a fear that if you truly open up to another person, that person will dislike the “real you.”

This is, in a sense, a chronic condition that shapes the lifelong behaviors of many adults — even, again, those who were raised in a seemingly normal family environment and who are functioning members of society.

The concept is based primarily upon attachment theory, which details the degree to which intimacy, safety, and connection needs should be met by parents from infancy. Perhaps one of the most famous experiments in all of psychology is the Wire Mother/Cloth Mother study conducted by Harry Harlow in the 1950s, which illustrates basic attachment and childhood need. Harlow used rhesus monkeys to test the preference between a mother made of wire who provided food and a cloth mother who provided only warmth and no food. In each trial, the baby monkeys preferred the cloth mother over the wire mother, despite the lack of edibles. (For more information on this study, take a look at the actual video footage of the Harlow experiment.)

Running on Empty describes twelve parenting styles that can lead to emotional neglect, each one detailed with vignettes. No parenting style is perfect, but a look at the twelve problematic approaches Webb discusses can provide insight into both your own childhood as well as how you function as a parent, if you have kids.

One point that Webb makes again and again is that all of the parents represented in her twelve problematic styles are, for the most part, well-intended — they want the best for their children. Indeed, their children’s physical needs are always met. But in most cases, the emotional engagement is simply not there.

Webb also offers a practical chapter for readers on how, as a mother or father, you can evaluate and, if needed, correct your own behaviors to avoid emotionally neglecting your children.

While Webb does a wonderful job explaining the new emotional neglect concept and identifying parenting styles that may lead to complications in adulthood, there is one major issue I found with the book: blame. There is an undertone that all bad things that happen in adulthood should be blamed on bad parenting. Webb does a good job showing how reflections on childhood can lead to personal insight, but she omits the requirement to take personal responsibility for your actions once you are an adult.

I, for one, as a mental health practitioner, do not adhere to the notion of all fault being heaped on the parents. Regardless of their earlier childhood environment, I believe adults are responsible for their own actions and behaviors — barring, of course, developmental disorders that require constant care. Webb dances a tad too close to a slippery slope on this one.

Still, I do not think that her intent is to completely absolve adults from responsibility, even if her writing sometimes points in that direction. And other than that issue, I would recommend her book to anyone interested in parenting, childhood, their own lack of confidence or belonging, or what might have gone wrong. Webb presents a new, very useful way to think about symptoms that may be misdiagnosed as depression, and to work through what was missing in one’s upbringing.