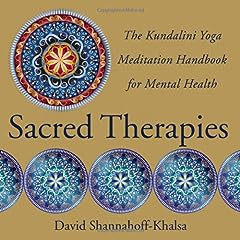 These are the kinds of books I find fascinating: novel approaches to old subjects. In Sacred Therapies: The Kundalini Yoga Meditation Handbook for Mental Health, David Shannahoff-Khalsa uses his yogic discipline to reexamine and provide alternative treatments for some of our more prominent psychiatric disorders.

Shannahoff-Khalsa’s resume is very impressive. He is the director of The Research Group for Mind-Body Dynamics at the BioCircuits Institute at the University of California, San Diego. He’s a yogic therapist at the Center for Wellness and Personal Growth in the Executive Mental Health Program, Department of Psychiatry, UCSD. He’s widely published in scientific journals as well as his own books. Finally, he’s an internationally respected authority on alternative therapies to psychiatric disorders. Even the Pentagon and the National Research Council Committee on Techniques to Enhance Human Performance have sought his advice. Clearly, Shannahoff-Khalsa is a preeminent voice in his field, and someone to whom many can and should look for wisdom.

Shannahoff-Khalsa does not disappoint in his newest book. It is not meant as a quick read. It is instead billed as a handbook, something of a reference guide.

Spanning 19 chapters, Sacred Therapies opens with a brief introduction before discussing and providing yogic methods to combat certain disorders. After the introduction, each of the remaining 18 chapters focuses on a particular disorder. Examples include panic attacks, phobias, grief, generalized anxiety disorder, insomnia and schizophrenia. Running the gamut of afflictions from small- to large-scale, Shannahoff-Khalsa’s book provides an in-depth reference guide, neatly organized and exhaustively thorough, to alternative therapies.

The obvious obstacle that must be overcome is the brick wall that is the Western attitude. While meditation and Eastern religions have certainly gained more mainstream appeal since the 1950s and 1960s, they are by no means on the verge of overtaking Christianity as the West’s primary practice or faith. As well, many Western doctors still look down upon Eastern methods and treatments as inferior and even entirely illegitimate. Thus, the introduction of Kundalini yoga into the Western idea of psychiatry is, for some, cold water in the face. But it is necessary to throw preconceived notions and prejudices out the window if one is to work with Shannahoff-Khalsa’s book. He’s not out to tear down the entire psychiatric establishment; rather, he’s out to supplement it.

In this way, Shannahoff-Khalsa should be commended for the structure of his book. In each chapter, he provides an explanation of the disorder from the American Psychiatric Association’s Diagnostic and Statistical Manual of Mental Disorders (DSM-IV). What this allows the reader to do is see if he, in his opinion, has something along the lines of the disorder, getting to see what the APA claims the definition and symptoms are.

On the accompanying pages, Shannahoff-Khalsa then gives his methods for alleviating the disorders. He is not averse to spending extra words detailing proper posture, breathing, timing or chanting. He knows that if the book is written in intricate detail, there is less margin for error on the reader’s part.

It is difficult to provide a critique of the Kundalini methods contained in Sacred Therapies. They are over 5,000 years old, and there is no way to gauge their efficacy properly in just a few days of working with them. That said, the only negative that can be laid on Sacred Therapies is (through no fault of its own) its inherently polarizing approach. Those who are not onboard with Shannahoff-Khalsa’s teachings will most likely not be swayed. They will read what he has to say, agree or disagree, try a treatment, see no immediate benefit and write it off. Obviously, this is unfair to both Shannahoff-Khalsa as well as every other yoga teacher of all disciplines.

If you are searching for a new approach to dealing with your affliction, Sacred Therapies is a great place to look. I’ve always maintained the same opinion of yoga: these teachings have been around for thousands of years. In some sense, in some way, for at least some people, they have to work. Maybe they’ll work for you.