Reviews Home » Safe with Me 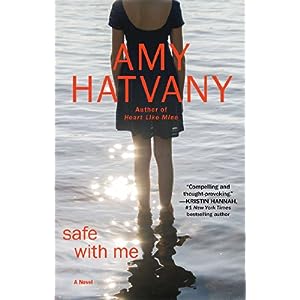 Amy Hatvany’s latest ‘can’t put down’ read and thought-provoking novel, Safe With Me, explores various themes – the role of technology in adolescents’ lives, grief management and dishonesty – but one that she truly delves into is the complexity surrounding domestic abuse.

When Hannah, a single mother and successful salon stylist, tragically loses her 12-year-old daughter, Emily, to a car accident, the grief is incomprehensible and utterly unfathomable. Hannah’s only solace stems from the fact that Emily can donate her organs to save the lives of others, including 15-year-old Maddie, who’s been struggling with a dysfunctional liver. Needless to say, Maddie and her mother, Olivia, are eternally grateful.

A year later, their paths converge when Olivia brings Maddie into Hannah’s salon. A special connection is forged between these three characters; however, once Hannah discovers that Maddie was Emily’s organ recipient, she’s reticent to reveal the truth about who she really is.

Meanwhile, Olivia finds herself in a floundering, abusive marriage. Her husband, a wealthy, renowned businessman, is completely controlling, manipulative and (at times) charismatic. In one gruesome moment, he hits his wife, hurting her, and in another instance, he thoughtfully brings her breakfast in bed and turns on his affectionate charm.

“As I set out, I knew that in trying to capture the characters’ emotions in the midst of their particular experiences would be a huge challenge,” Hatvany said in an interview on shereads.org.“There is a fine line between accurate portrayals and too maudlin description, and when dealing with such tumultuous circumstances as the death of a child, organ donation, and domestic violence, I had to be especially vigilant to include moments of levity and normalcy amid the more grief-stricken scenes.”

In regards to domestic abuse, it’s not necessarily a subject matter that’s black and white; this undeniably awful situation incorporates many shades of grey. Outsiders may perceive victims of abuse as ‘weak’ for not immediately walking out the door. Unfortunately, it’s not always so simple.

“People tend to have this image of abused women as weak, low income, and uneducated, when in fact, the opposite is often true,” Olivia said in one chapter. “Many women stay because their husbands are upstanding, successful men and they think no one will believe what’s going on behind closed doors. Abusers are expert manipulators – of their victims and everyone else in their lives.”

Olivia feared that her husband would utilize his power to gain custody of Maddie. She constantly questioned how to navigate her way through this real-life nightmare.

That being said, help and support is readily available for those caught in dire straits who desperately need an exit strategy. And while I don’t want to dole out too many plot details and divulge certain outcomes, rest assured that Hatvany knows how to tie up loose ends.

If you’re looking for great writing and relatable, authentic characters, Amy Hatvany’s novels never cease to disappoint, and Safe With Me is no exception.