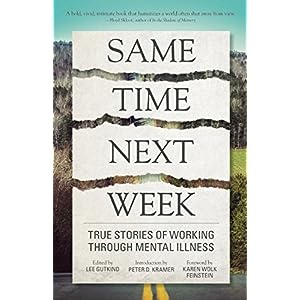 Proof that others have found progress and recovery in mental illness is important. Proof that someone else struggled and found hope: That’s huge.

In Same Time Next Week: True Stories of Working Through Mental Illness, patients as well as mental health clinicians write about their own experiences in a collection of well crafted essays. Editor Lee Gutkind — founder and editor of the journal Creative Nonfiction, editor of more than twenty-five books, and a rather formidable presence in the nonfiction world — has done wonderful work gathering and editing these pieces. Although each is written by a different person, the book as a whole flows beautifully.

While I read the collection as a mental health consumer, this seems like a book that professionals would benefit from as well: They’d likely glean ideas for how to better serve their clients in difficult situations. In some essays we get inside the mind of the consumer. Kurt Warner, for instance, writes about his obsessive-compulsive disorder. “I have a dictator in my head,” he writes. “Its commands are my earliest memories. It does not care what day it is, what I am doing or where I am. This tyrant gives me orders endlessly.”

I understood exactly what Warner writes about because I, too, live with OCD. His description of the illness is spot on — and I think any therapist who reads his essay would come a little closer to truly understanding what it feels like in our minds.

Other essays allow us to look on as therapists try to help the very ill. In “Playing Cards with Mr. Newman,” clinician J. Timothy Damiani encounters a very depressed and despondent long-term patient on a psych ward. Though the prognosis is not good for Mr. Newman’s recovery, Damiani explores his patient’s past, then re-diagnoses him as bipolar — not schizophrenic, as was previously thought — and changes his medications. Slowly, Mr. Newman begins to come out of his shell. The two begin to play cards on a regular basis.

The interaction with Mr. Newman causes a shift in Damiani, too. He writes, “The best reason can do is to acknowledge that something extraordinary occurred. One hand of cards began a deeper transformation in me. I grew in my ability to tolerate despair, and I learned to listen to the raw voice of suffering without running away.”

As for hope for making progress with a difficult illness, Ronald Bassman’s essay especially stands out. Bassman tells the story of being labeled schizophrenic in his early twenties and committed to a psychiatric facility where he was repeatedly put into insulin-induced comas.

“I, like most who have been diagnosed with schizophrenia,” he writes, “have been told that I have a biochemical disorder, a brain disease. To remain stable and survive outside of an institution, we are told, we must take psychiatric drugs for the rest of our lives. If we work, it has to be in low-pressure jobs with few demands.”

Then: “Quietly, almost inaudible to myself, I said no. No, a psychologist I will become. I will not let go of my dream.”

Indeed, Bassman tells us that he was able to stop taking psychiatric drugs one year after his second hospitalization — and has remained med-free for more than forty years.

And just as he had dreamed, he went on to become a psychologist. His recovery and his ability to live life as he had hoped make for a very moving read.

Suicide recovery, too, receives a beautiful and hopeful essay dedicated to it. In “Came Down a Person,” Ella Wilson repeatedly tries to kill herself, beginning at age twelve. As an adult she cuts her wrist with a bit of broken china bowl, winds up with the antibiotic-resistant infection MRSA, and nearly loses her arm and her life.

Then, her therapist abruptly fires her.

I know how that feels. After my own suicide attempt, my therapist dumped me over the phone while I sat in the parking lot of a Blockbuster.

Through recommendation, Wilson finds an unconventional art therapist. Here is a wonderful excerpt from that moment:

“When I walked into her office for the first time I saw only that she was smart and tall and unfazed by my apparent condition, and that she had the same jeans on as I did. I saw in her face that she had not always been happy. I saw that she had woken up in the wrong places and bargained with God. These are things crazy people can sometimes spot in each other. I was glad for this at least. It is hard to lay bare one’s hopeless soul to someone who has only ever lost a cat and shops at Lands’ End.”

As a mental health consumer, I found this collection fascinating, and was able to relate to most of the essays. It is honest, and it is hopeful: two things we need when we read about severe mental illness. That the writers are talented makes it an especially worthwhile read.