Reviews Home » Saving Each Other: A Mother-Daughter Love Story 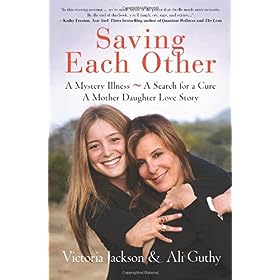 Accessing the best doctors in the world, getting help to create a family foundation, mining alternative fields to solve a mystery illness: these are financial and intellectual opportunities not afforded many people faced with medical horror.

In Saving Each Other: A Mother-Daughter Love Story, Victoria Jackson and her daughter, Ali Guthy, tell the story of a child stricken with a deadly disease and a mother who fights best when the odds are the worst. Alternating mother/daughter commentary chronicles the fight against Ali’s rare diagnosis of the autoimmune disease NMO, or Neuromyelitis Optica. Due to their unusual status, the pair weaves a tale that is at once hopeful and utterly alien to most readers.

Victoria Jackson fought her way from a violent childhood to all the joy and promise that her life as a half-billion-dollar makeup maven allows — especially after she married Bill Guthy of Guthy-Renker infomercial fame. Bill, though not a co-author, is no less an interesting and positive player in this story. Early in the book, he has a rendezvous with cancer.

We are told that he lives solely within the borders of optimism that frame any tough situation — a trait learned from his family, who would apparently break out in songs from the Sound of Music during get-togethers. Then, Bill and Ali watch in awe as the Superwoman that is their wife and mother not only battles the deadly autoimmune disease that strikes the talented tennis-playing Ali, but also starts thinking about a foundation to bring research and better understanding to others struggling with the illness.

At first, Ali and her mother take two very different paths: While Ali doesn’t even want to know the name of her disease and certainly not the the prognosis as it first affects her vision at age 14, Victoria immerses herself in every detail. Her approach to success, she shows us, is in researching every aspect and every possible outcome to defeat any challenge that lies before her. She also speaks frequently of the “2% factor,” her concept that when the odds of something happening — good or bad — are incredibly low, they are likely to occur to her or those near her.

When she pulls herself out of an abusive past to create her Victoria Jackson makeup enterprise, it is a 2% factor example, she tells us. Her husband’s episode with cancer, another example. Next, when the structure is built for the Guthy-Jackson Charitable Foundation, Victoria meets the renowned physician Dr. Katja Van Herle of UCLA, who has recently launched the All Greater Good Foundation. The doctor welcomes the chance for her own organization, which supports education and outreach programs for underfunded public health issues, to partner with Victoria’s to conduct NMO research. Definitely filed under 2%.

Victoria and Ali’s challenge is daunting. Yet unless the reader is dealing with a potentially fatal disease and also has the kinds of monetary and social resources Jackson does, there are times when it is difficult to feel the real pathos of (or empathy toward) the family’s unquestionably frightening journey. One presumes that there had to have been some darker moments amid the positive “2%” ones. Perhaps had the authors included one or two in their book, they may have made it a little more accessible to Everyman.

However, the bright moments they cover do convey some universal lessons worth embracing. We read about Ali’s maturation from denial to advocacy — a change that is genuine and heartfelt. Her becoming the editor of a newsletter to help others better understand the daily challenges of the disease seals her growth into an empathic, involved young woman. Reading about a mother and daughter and caring dad working together under the most difficult of situations and emerging stronger and more united, when often it’s those very tough situations that tear families apart, is also especially gratifying. The “Resources” chapter that wraps up the book appears to be useful as well.

If you know going into it that this book is about not just an unusual disease but an exceptional family of great means, the story does not disappoint. It’s not often that hero-worshipping and the super powers of others play such a big part in real life, or life for the majority of us.

But while it may put some readers off, “Saving Each Other” is a reminder that worst-case scenarios don’t always result in worst-possible endings. Perhaps if people like Victoria Jackson create more foundations, we can bring better results to people suffering from the many misunderstood and under-researched medical issues afflicting those of limited resource. That may be one lesson. If nothing else, the book most certainly carries hope from the first page to the last. It just may not reflect the reader’s reality.