Reviews Home » Seeing Ezra: A Mother's Story of Autism, Unconditional Love, and the Meaning of Normal 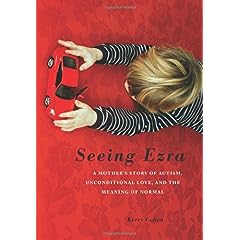 Seeing Ezra: A Mother's Story of Autism, Unconditional Love, and the Meaning of Normal

Autism is viewed as a tragedy. As a disorder that robs children of their lives and parents of their children. It’s a disorder that must be properly diagnosed and treated. And the younger it’s caught the sooner professionals can intervene and provide intense treatment.

In Seeing Ezra: A Mother’s Story of Autism, Unconditional Love, and the Meaning of Normal, author Kerry Cohen wants readers to know that autism isn’t a tragedy, a misfortune or a loss to be grieved. It is not a bleak, hopeless existence. She wants us to see past the disorder to what’s right in front of our faces: a beautiful child.

In her memoir, Cohen writes beautifully, achingly and honestly about how she and her husband grapple with their son Ezra’s development, autistic diagnosis and finding the right help. From the beginning, Cohen is turned off by the cold and callous evaluations and the rigid therapies professionals offer. During these sessions, Ezra, a happy and expressive child, becomes visibly confused and uncomfortable, while therapists curiously look on and continue prodding him.

Hoping to improve their lives, the family makes a cross-country move. Cohen also has another baby, a boy they name Griffin. But their move has the opposite effect, stressing both spouses and creating a palpable separation. Seeking out treatments for Ezra also takes a toll. Cohen’s husband sinks into a depression, and their marriage begins to unravel. Instead of turning to each other, they become more and more disconnected. He grows distant, and she pursues an affair. Still, they’re able to band together as parents, search for the best help for Ezra and continue being a close family.

Seeing Ezra will resonate with parents of special-needs kids, who can undoubtedly relate to the frustration, stress and overwhelm of wanting to help their children while protecting them and letting them be kids. Cohen regularly double-guesses her decisions and continuously feels torn between listening to her maternal instincts—wanting a happy, relaxed childhood for Ezra—and to the professionals who advocate for stringent treatments. She repeatedly questions whether forcing Ezra to conform to our standards and past his comfort zone is the right thing to do. Cohen writes:

[In a message board for special-needs parents] I begin to share my concerns about Ezra, about how I just want to accept him as he is, how I want him to be happy, to love life. A lot of parents, I learn, feel the same way. A lot feel those same hazy pressures that I do: We must do everything we can to make our children normal, to do something fast during the compressed “window of opportunity.” A lot, like me, want to ignore this notion that there is a brief window in which our children can be helped, but we are afraid to. We’re afraid our instincts might be wrong. We’re afraid that we really are failing our children if we don’t follow the path handed to us, one where all autistic children must participate in forty hours of behavioral therapy every week, receive chelation, and be made into something other than who they are…

Cohen describes Ezra’s development and because of his difficulty communicating, how helpless she feels not knowing what her son needs and wants; never truly knowing what he’s thinking. While he makes great progress some days, other days, it feels like taking several steps back. As Cohen writes:

With Ezra, though, growing up is so uncertain. There is nothing that tells us he will ever communicate easily or stop crying when someone sings “Twinkle, Twinkle, Little Star.” True, he has dropped tons of behaviors we worried he’d never lose. He’s grown comfortable with other kids and surprising noises. There was a time we worried he’d never talk, and now he does. There are plenty of skills, too, that we don’t know he has and then, all of a sudden, we see him doing them. When it comes to Ezra, we can’t look at timelines—as most parents can—and know basically when to expect something. We can’t assume that anything we do or make him do, like all therapies, will ever affect his development. As with most children on the spectrum, his development follows its own unwritten path. Skills will come, others won’t, and then they’ll disappear and come back. His development is like a magic show. Again and again I have to remind myself to stop trying to control it.

She talks about another struggle she continuously faces that parents will certainly relate to: the lack of ease. She writes:

I hate that I never have ease. I hate that while other mothers are easing through decisions for their child, are making holiday cookies and worrying over whether the snow boots are too small, or whether it’s time to move out of the crib and into a big-boy bed, I pore over schools within driving distance, trying to find one where my son can belong. I look for supplements and approaches to try and encourage my son to eat food. I lie in bed and wonder how my son will ever be okay in the world, how I can ever help him love who he is and have his needs met. I can never be easy. I can never be still. Always, I must be running, moving, searching, finding. Always, I am fighting against the unbearable default of failing my son.

Parents also will find comfort in knowing that they aren’t alone in navigating the range of emotions and challenges. And while this is a story of one boy and one family, Seeing Ezra demystifies autism and illustrates that while there are many difficulties, autism is not something to be feared. Sadly, in certain cases, the media portrays autistic people in a disparaging light, which perpetuates this idea. Cohen writes “…they encourage that notion in our society that autistic people are untenable, empty shells, that autism steals children from their parents like the Devil might.”

Seeing Ezra is a must-read for professionals in the mental health field, too. Again, Cohen recounts many experiences with detached and condescending therapists, who were oblivious to the fact that they weren’t helping in the least (rather they probably viewed Cohen as an uncooperative parent in deep denial). Reading this memoir will help professionals get a glimpse into a parent’s perspective of raising an autistic child, the challenges, frustrations and the immeasurable joys. And it’ll hopefully inspire professionals to be more sensitive, supportive, open and helpful. Cohen writes:

Yet it’s outrageous to judge any parent for their feelings, their convictions, for the ways they’ve found to cope with this alien world of being a special-needs family.

Ultimately, Cohen’s memoir tells the story of an exuberant little boy, who loves art, reads music, sings “Bohemian Rhapsody” in its entirety, makes videos on his computer, hugs and cuddles with his brother as their dad reads to them before bed, and is so much more than his diagnosis; and of a family that embraces Ezra for who he is and loves each other deeply and unconditionally. As Cohen writes, “There is no tragedy here.”

Seeing Ezra: A Mother's Story of Autism, Unconditional Love, and the Meaning of Normal