Reviews Home » Seeking Enlightenment: The Spiritual Journey of a Psychotherapist 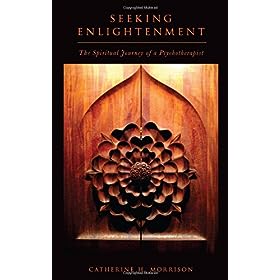 Seeking Enlightenment by Catherine Morrison is a short memoir of one therapist’s journey in conceptualizing Eastern and Western spirituality. Morrison tries to come to terms with how these two diverse spiritual traditions cross paths in regard to the concept of enlightenment. A clinician with roots in Western-oriented psychotherapy and spirituality, she eventually found herself on a path that entailed exploring Eastern ideals of spirituality in both her clinical work and personal life.

Morrison’s book takes readers through her spiritual evolution and growth process by using various case studies and personal real-life examples. The book reads as a novel, but presents the audience with insightful and thoughtful concepts of spiritual enlightenment. Although the book does not present as a “how-to,” or even a linear equation for enlightenment, it still takes the reader on a journey of personal reflection and growth. I believe the goal of Morrison’s work is to help readers develop their own personal definition of an otherwise elusive Eastern spiritual concept.

The audience for this book could include mental health professionals, clients, or simply people who are interested in developing their own understanding of spirituality. Overall, my reaction to Morrison’s book is positive. The intensely detailed narrative accounts of people she has encountered along her spiritual journey help broaden the context of the topic for the reader. This also serves to make the book that much more relatable to all types of people — from the person just exploring the fringes of Eastern spirituality to the fully self-actualized spiritual guru. Either way, this book is highly applicable to those who are interested in fleshing out the spiritual concept of enlightenment in their personal or professional lives.

The book’s structure is relatively linear. Following the introduction and beginning notes, Morrison divides the bulk of the book into three distinct parts: “Glimpsing My Ignorance,” “Helping Others Help Me,” and “Through the Portal of Self-Knowledge.” Within each part, Morrison presents various case studies and real-life stories that help readers conceptualize the information and reflect on their own current levels of understanding the process of enlightenment. We later see that these three parts of the book mirror the three parts of Morrison’s own theory of development.

Morrison uses Piaget’s Cognitive Developmental Stages as a framework to inspire the basis of her work throughout the novel. Ultimately, Morrison coins her own developmental theory, or staging system, which is explained in detail in the introduction.

Evolutionary in nature, Morrison’s theory consists of six dysfunctional stages, with the first being psychosis. Following these six stages of dysfunction, Morrison discusses six neurotic stages. She closes out her theory with six stages of enlightenment.

Mirroring Piaget’s ideas, Morrison uses various case studies throughout the book to demonstrate that content aside, everyone goes through what she sees as the same developmental process. To avoid getting stuck in any one stage, the end result of each stage must always be resolution.

By the end of the book, Morrison believes herself to have achieved some level of enlightenment and self-actualization. If nothing else, she believes that this is an on-going process that she will be continually working toward. The book does lack some of the scientific support behind her theory in some cases, but the overwhelming case study support does supplement her credibility to readers.

The book also gets much heavier at the end, with more in-depth spiritual ideas and Eastern spiritual language. This may lose the reader or turn the reader away at one of the most important parts of the book. Perhaps a more cohesive language and tone throughout the book would have been more beneficial in aiding in the layman’s understanding of such profound spiritual ideas. Overall, though, the book was a positive, quick read. Morrison succeeds in bringing the concept of enlightenment to life for the Western world.