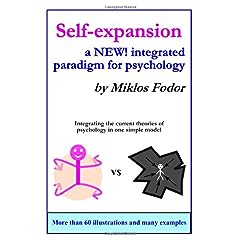 Self-Expansion (the student edition) by Miklós Fodor offers a theoretical explanation of his basic concept, FIPP and its various applications.  FIPP asserts that self-concept is formed through constant acceptance and rejection of environmental cues entering our consciousness. Those cues called cognitive schemata that we accept, in turn, expand our self-concept while those we reject narrow it. The remainder of the book offers multiple treatments of the FIPP theory as application proof of its accuracy and utility.

Unfortunately, the FIPP theory, as offered in this Student Edition, is underexplained, overapplied and falls short of its intention to offer a new explanation of self-concept formation.  Essentially, it is a mashup of other poorly applied theories borrowed from well-established schools of thought, most notably systems theory.

Fodor’s book devotes five pages, including summary notes, to explaining the FIPP theory. (However, FIPP as an acronym was not defined anywhere in the text.) He explains that new incoming cognitive schemata supported by existing beliefs assimilate into our self-concept and expand our conscious view of the environment.  In this instance, our acceptance of the new schemata is said to be self-expanding in that a new, more robust cognitive schemata emerges, furthering our understanding of the world. New incoming schemata not supported by the existing belief systems are rejected, resulting in a self-narrowing of our understanding of our environment.  This dynamic schemata acceptance or rejection forms our self-concept viewed as a reflection of our beliefs about the environment.

The remaining 171 pages of this book are devoted almost exclusively to seemingly random applications of the FIPP theory.  Each chapter is written in convoluted grammar and includes poorly designed and difficult-to-interpret diagrams and line drawings.  These chapters include FIPP explanations for puzzles, singing in the rain and altruism, spiritual enlightenment and, of course, sex among other topics.  Typically these application-specific chapters begin as a focused discussion and then deteriorate into a meandering journey through topics apparently related only in the author’s own thoughts. These chapters become almost the author’s “stream of consciousness,” giving the reader a feeling of trying too hard to transform a popularized view of self-concept formation into an academic-quality work.  These chapters amount to little more than weak applications of FIPP and much ado about indiscriminate topics.

From the general language patterns and expressions used, this text appears to be written by an author whose second language is English.  The writing is stilted, quite formal in one passage and quite informal in the next, making it challenging to understand. For example, in Chapter 8, “What Makes a Relationship Work?  How Should We Choose a Spouse,” Fodor discusses FIPP as it relates to the Jungian concepts of anima and animus.  The text asserts that Jung means there is a man in every woman and a woman in every man.  It further claims Jung’s central theoretical concept to be that mental health results from harmony of these two concepts within one human body. This reader finds it difficult to believe than any serious student of psychology would reduce Jung to such concrete terms lacking the subtlety and nuance required for Jungian theory.  For this reason and others, this text would benefit from a well-skilled editor and seasoned, scientific translator before being placed in the hands of students.

One of many examples of unsupported theory is again found in Chapter 8, in a section titled “Orgasmability.”  This term, it seems, introduces us to a “new personality trait” analogous to hypnability, defined as how quickly or slowly one is hypnotized.  Orgasmability is defined as how fast or slow an individual achieves an orgasm.  The difference in speed of orgasm is revealed in FIPP terms.  Those whose cognitive schemata expand achieve orgasm quickly while those whose schemata narrow achieve orgasm slowly if at all.  Those who achieve orgasm quickly have a much “better” self concept than those who achieve orgasm slowly. This reader wants very much to believe that the theoretical subtleties lost in this Hungarian-to-English mental translation cause this to read as a sophomoric rather than as an informed explanation of orgasm, hypnosis and self-concept. This reader wants very much to believe Mr. Fodor’s sincerely formed theoretical offerings suffer from poor translation rather than poor scholarship.

Mr. Fodor refers to himself as both a headhunter and a classical psychologist.  His credentials include a high school degree (Hungarian) in Mathematics and a successful 10-year career in international human resources consulting.  His FIPP theory is based on over 3,000 “life interviews” over the course of his career with no quantitative and little, if any, qualitative analysis to its credit.  The accomplished, but street-wise, psychology student is tempted to believe this book to be another example of a consultant trying to build a business upon the self-proclaimed ability to uniquely explain paying clients to themselves and others.  It reads more as a poorly structured, commercial venture than as an academic proposal.  The concept of FIPP and its applications are presented in an obfuscating way employing tenuous and painful efforts at academic speak.  These obscure words and phrases would not fool an academician but might impress a client with a budget.

This book’s purpose is more toward gaining business and making money than expanding psychological thought and purpose. I could be wrong about this… but I doubt it.