Reviews Home » She Bets Her Life 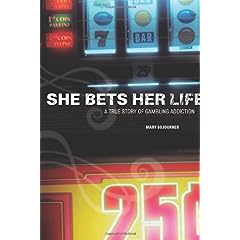 She Bets Her Life

Mary Sojourner’s She Bets Her Life is a book written for women “trapped in compulsive gambling” and the people who know them. Sojourner’s book is touching in that she herself was once a compulsive gambler, bringing to her writing an intimate and empathetic undertone that sharply contrasts with the cold, hard facts in her research.

The book is an account of Sojourner’s support group, known as Scheherazade’s Sisters. The reader follows each woman’s journey in fighting her gambling addiction, witnesses the psychological and physiological hardships caused by compulsive gambling, and learns of the biological, economical, and social factors contributing to the behavior. The narration is simple and straightforward, with the goal of educating the public about compulsive gambling for women, and helping the victims overcome their addiction. Sojourner divides the book into twelve chronological chapters, beginning with when a woman gets “hooked” onto gambling, and ending with the long battle facing her in “staying clean.”

The door leading to the nightmare that is compulsive gambling has countless keys, “[b]lackjack, poker, bingo, slot machines, keno, lottery tickets, online gambling sites…,” all of which can trigger the downward spiral to self-destruction. Sojourner “welcome[s you] to [her] world” by casting light on the mechanics behind the nightmare, from both the gambler and the industry’s point of view.

In the user’s guide she has helpfully provided at the beginning of her book, Sojourner summarizes the contents of each chapter and points out specific chapters that may be of interest to different individuals reading the book. Chapter 2, “Crossing the Line,” provides a test of 20 questions taken from Gamblers Anonymous for those who “suspect [they] have a problem, but [are] not sure.”  Chapters 3 to 6 talk in depth about the brain chemistry and psychodynamics behind compulsive gambling, the impact of gender on gambling addiction, and the “industry’s strategies to keep women playing,” respectively. The rest of the chapters center around the recovery process, the relapses addicts fall into, and the family’s role and experiences during that time period. Finally, there are resources and a works cited list included at the end, offering websites and hotlines for those in search of support and a books list for suggested further readings.

Although the book is a continuous narrative of a compulsive gambler’s struggles to break free of her cycle, the key points in terms of factual information can be found in chapters 3 through 6. The third chapter, titled “Dopamine is Queen,” even lists out its main points in easy-to-digest numbered and bulleted lists. Specifically, “dopamine is [a chemical] linked with pleasure,” and is triggered in surges by “unexpected positive reward,” which then causes “genetically dopamine-impaired people…to seek those surges.” Put into context, Sojourner’s list clearly explains how a certain group of people fall prey to the calculated odds of casinos. Chapter 4 explores different theories regarding why gambling becomes an addiction, from the perspective of various figures such as Sigmund Freud and B.F. Skinner. Chapter 5 outlines the difference between genders when it comes to gambling. The games men and women gravitate toward, the “reward” they seek from their bets, and the amount of time it takes for them to “cross the line” all differ because of their gender. Sojourner looks at the female side of the coin in chapter 6 when investigating the methods casinos employ to draw in women, such as visual repetition, interior design, and even carpet manufacturing.

While the research portion of the book lies in the middle, it does not take away from the rest of the chapters, nor does it discourage the reader from flipping the page after hitting the last words of chapter 6. The book has certainly achieved its goal of informing the public of the truth behind compulsive gambling behavior; it tackles the reader’s interest by skillfully blending hard facts with the personal stories of women from various backgrounds, social statuses, and life stages. Even those who are not compulsive gamblers are likely to sympathize with the Scheherazade’s Sisters as they describe their lives.

However, She Bets Her Life is not without its flaws. In the “Dopamine is Queen” chapter, diagrams could have saved the reader from having to visualize the brain chemistry and cell parts. When I stumbled upon the well-phrased metaphor explaining the process pages later, I couldn’t help but be confused as to why the cell parts needed mentioning at all when the metaphor was a perfectly functional one that made no mention of the aforementioned parts.

Other parts of the book felt rushed and uncalled for. The unfair treatment of casino employees by their employers was breezed over so quickly in chapter 6 I was forced to step back and reread the summary so to assure myself the book is, indeed, about the women who are gambling. The issue itself is one worthy of controversy, but it digresses from the book’s subject with unexpected abruptness and disrupts the reading midway.

Furthermore, the book focuses heavily on dopamine impairment as an explanation for compulsive gambling, and I was not particularly convinced by the way all the women in the Scheherazade’s Sisters fit the idea. Other possible causes are not given adequate attention, leaving the impression of bias.

Overall, She Bets Her Life does a commendable job of unveiling the life of female compulsive gamblers through its engaging storytelling and clear-cut presentation of facts. The lack of diagrams and occasional deviations from its main topic should not prevent you from picking up this book. The aha moments you’ll find with the Scheherazade’s Sisters alone make the book shelf-worthy. It is, as Sojourner puts it, an invitation to the “slow, patient work of saving our own—and each other’s–lives.”

She Bets Her Life: A True Of Gambling Addiction

She Bets Her Life