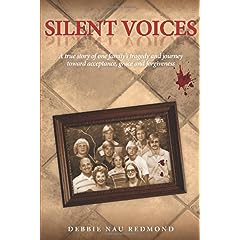 The book Silent Voices is an intriguing story about how a family dealt with mental illness and how a lack of support from professionals caused a family to endure tragedy that changed their lives forever.

The tragic story of the Nau family and son Rick Nau’s battle with schizophrenia unfolds after the author and her older brother Jim had a feeling that “something wasn’t right” with their younger brother Rick. On Sept. 29, 1983, Rick, suffering from delusions, went on a shooting spree that killed the author’s two older brothers.

After the introduction the book Silent Voices then chronicles the downward spiral of Rick Nau into a delusional and dark place full of frightening visions and hallucinations that the health care system failed to treat, which set him on a dark path toward destroying his family — the people who showed him nothing but unconditional and unwavering love despite his illness and actions.

Silent Voices is more than a story about mental illness. Author Debbie Nau Redmond builds a raw, emotional story that creates such tight tension that the readers will feel drawn in and pulled to the edges of their seats, waiting for the fateful chapter that reveals the consequences of Rick Nau’s untreated illness. Countless times the author’s parents cry out to various professionals seeking help with their son Rick. The story goes on to show the family’s reactions as they are turned away by doctors and mental health facilities with frustrations and anger because their son is receiving no treatment. At one point after finally being observed by a doctor, the author’s mother was told that “I don’t think Ricky is really sick” (p. 136). And with no assistance or medication, Nau continued to spiral into a dark place filled with hallucinations and delusions that ultimately set the course for a very destructive consequence.

At the time this story unfolds, schizophrenia had few treatment options (although that has improved today) and often was difficult to diagnose. At the time that Rick Nau first showed symptoms of this destructive brain disease, he was in the Navy and eventually honorably discharged to be sent home to his unsuspecting family. When Rick came home, his mental illness began to unfold.

Debbie Nau Redmond gives the reader a history of her brother Rick as an outgoing, lovable family member who was an outstanding athlete throughout his childhood and adolescent years. The author explains that things began to change when Rick started hanging around a friend in high school who introduced him to drugs. It is not determined whether Ricky’s illness began with the use of drugs; however, that is when the family started to notice dramatic changes in his personality.

After the family’s tragedy, Rick is sentenced to the state mental institution and finally receives the treatment and care he has needed. “I think the medications and knowledge of how to treat mental illnesses like schizophrenia have improved immensely since my brother’s battle began,” said author Debbie Nau Redmond. “But many schizophrenics and mentally ill people often don’t believe they are sick. They fall through the cracks of the system and often wind up on the streets without help. And their families may feel crippled with nowhere to turn to help their loved ones.”