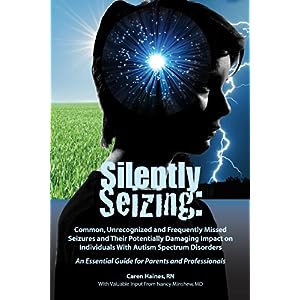 One might suspect that, at a mere 148 pages, Caren Haines’s Silently Seizing: Common, Unrecognized, and Frequently Missed Seizures and Their Potentially Damaging Impact on Individuals With Autism Spectrum Disorders is an easy, finish-in-one-sitting kind of book. But one would be very wrong. The book is written in a very straightforward and almost conversational tone. However, it deals with autism and autism spectrum disorders and the seemingly little-known connection between autism and seizures. And it is absolutely packed to the brim with medical information.

Haines is both a registered nurse and mom to her son, Josh. Josh was diagnosed with autism as a toddler, and soon after presented with symptoms that troubled his mother. He would stare off into space at nothing for extended periods of time. During these episodes, Haines tells us, nothing that anyone around Josh said or did could get his attention. It became extremely difficult for Josh to focus on anything and these episodes seemed to become more frequent and last longer as time went on. Josh began having problems communicating as well. He was also getting very severe headaches. When Haines took her concerns to Josh’s doctors, they were initially dismissed as a presentation of common autism symptoms.

Not satisfied, Haines took her son to doctor after doctor. Finally, a neurologist diagnosed Josh with “partial epilepsy.” In this “silent seizure disorder,” patients do not violently convulse. Rather, only part of the brain is affected.

During a seizure, the brain’s electrical system goes haywire. Everything fires at once and the brain simply “short circuits” itself. When most of us think of a seizure, we think of only one type. We think of what’s called a grand mal seizure. People with these types of seizures shake violently. They might be in danger of swallowing their tongues, hitting their heads, or foaming at the mouth. However, this is only one type of seizure. Other types present with different symptoms. In Josh’s case, the part of the brain that was affected was the hippocampus (the memory center) and the part responsible for concentration and speech.

Haines not only tells Josh’s story, but also backs up her experience with solid science. Thankfully, the author does a fantastic job of explaining all of the rather complicated medical information in the book. She explains what autism is, as well as what it isn’t. With the help of doctors she’s met along the way, she is also able to thoroughly describe various types of seizure disorders that are surprisingly common in kids with autism; common seizure symptoms; and why these often go undetected in kids and adults.

If left untreated, Haines writes, seizures can lead to psychosis and possibly self-injury behaviors. And so, in her short but densely-packed book, she goes over which tests may need to be done to obtain a diagnosis, as well as possible medications and other treatments that look promising.

In short, her book fascinated me. Then again, I’m kind of a psychology nerd. I love the brain and figuring out how it works, so this wasn’t hard for me to get into at all. Haines does a superb job of laying all the heavy science out so that it’s easy to grasp for any reader. The only real downside is that there may be too much information. Reading at times was a little overwhelming. Still, I highly recommend Silently Seizing to those affected by seizures or autism.