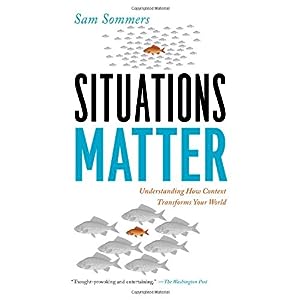 Sam Sommers describes his work simply and directly: “I study situations for a living.” He is a psychology professor at Tufts University and appears to thoroughly enjoy his job. Situations Matter: Understanding How Context Transforms Your World applies the lessons he has learned through research to our daily activities — and it’s an enjoyable read.

To make his points, Sommers uses a multitude of both research and anecdotal examples that, while often college campus–based, are easily understood and relatable.

Sommers gives his seven chapters “cute” titles, each of which makes sense once you have absorbed their content. He begins with an explanation of “WYSIWYG” (What You See Is What You Get), the significant impact of our perceptions, rather than objective reality, on what we do. Following close on is “Help Wanted,” a consideration of the influence of crowds on behavior, with some chilling narratives that reinforce that we are not generally as brave and independent as we think or claim. He continues this inspection of the influence of others in “Go With the Flow.”

In “You’re Not The Person You Thought You Were,” the author starts to really challenge our self-concept with various examples of how our self-perceptions do not match our behavior. The last three chapters all deal with some aspects of our relationships with another person. Chapter 5, “Mars and Venus Here on Earth,” perhaps a reference to earlier self-help books, deals with gender and relationships, while “Love” and “Hate” need no further explanation.

Sommers promises readers that his book will help them do four specific things more effectively: Predict others’ reactions to situations, assess the context of their own situations, use situational factors to influence others, and “deflect” the same from others.

In spite of the emphasis on manipulation in these four goals, I found Sommers’s book to be open and positive. It intends to help us understand and counter undue or inaccurate context influence as we act or make decisions.

Through discussion of varied research and interesting stories, Sommers appears to reinforce three basic messages. In my own words, they are:

2. We do not act in a situation as we think we would; and

3. Other people influence our behavior more than we realize.

The author builds on these three ideas in the first three chapters, then amplifies and reinforces them in the balance of the book.

Sommers writes in chapter 1 that we see and interpret situations in ways that are congruent with our basic perceptions of how things are. Further, he says, we expect our perceptions to be consistent.

For example, when a small children see their beloved teacher in a non-school environment, they struggle to resolve conflicting views of behavior and role. We want others to be consistent in their appearance to us, Sommers writes. As adults, we attribute expertise to someone even in areas where they are not experts. An emergency-room doctor seems almost omnipotent, for instance, so we often assume them masters of non-medical activities as well, such as dancing or sports.

This phenomenon, “WYSIWYG,” Sommers explains, leads us to believe that a person’s actions or expertise in one area “result from underlying, consistent character — and we expect this personality to emerge reliably anytime, anywhere.” Madison Avenue uses this concept in its ads by employing celebrity endorsers and actors, members of professions that we perceive to be credible and trustworthy.

Chapter 2 is the most uncomfortable part of the book. Sommers examines several well-known murders, such as the Kitty Genovese and James Bulger killings, along with more current incidents. This section convincingly sets forth the idea that people in groups are less likely to act forcefully and clearly in potentially dangerous situations to help others and themselves.

Our inability to clearly understand the impact of situations on our behavior is a theme throughout the book: We incorrectly think we would act differently and, most important, better than we realistically do.

Sommers makes convincing use of news stories, criminal investigations, and well-known psychological experiments, such as the Princeton study by Darley and Batson on the influences on helping behavior when people are confronted by a person in distress while on their way to a meeting. The result: 63% of participants stopped to help when they were early for their meeting, but only 10% did so when running late. Despite their assumption that values would override urgency, Darley and Batson found that “of all the potential determinants of helping behavior examined by researchers, time pressure was the single strongest influence.”

Participants in Darley and Batson’s study even included theology majors on the way to give a presentation on the parable of the good samaritan, but this mission was not found to affect their actual behavior.

Sommers also discusses our tendency to participate in crowd behavior whether we want to or not, such as when we do the wave at sporting events. One telling experiment showed that when faced with smoke pouring through room vents, we are more likely to not react to this potential danger when others in the room do not react. We doubt our own perceptions and are reluctant to risk being first, leading Sommers to observe that “situational influences … being in a crowd … informs our sensory perception, relieves feelings of responsibility, and ups the stakes for the action we take.”

Sommers also reviews the well-known Milgram obedience experiments conducted at Yale, in which participants were told to give shocks to others. The results support this message quite nicely.

Sommers has written an engaging and surprising book about the real reasons that we do or do not do things. He is particularly adept at showing us how situation can make much more of a difference than our personality, values, beliefs, or judgments.

He writes for the general population and his examples are clear and non-academic. Both those with a professional interest and those with a personal desire to learn more about behavioral influences will find much of value here.

And, once you have been exposed to the ideas that Sommers ably presents, you will begin to examine your own actions and question your motives in your daily life. Anyone who is willing to be challenged and to engage in honest reflection about their own actions and motives will find the book a useful guide.

As a professional facilitator, therapist, and trainer, I quickly identified how to apply Sommers’s ideas to my work with individuals and groups. I believe other readers will do so as well. Those who work with relationship issues, such as marital counselors, should find this book particularly helpful. Sommers states, and I agree, that “recognizing the power of situations gives us a leg up in a range of endeavors.”