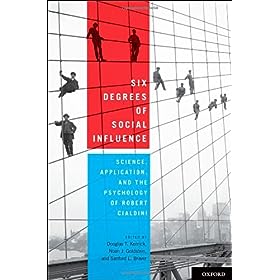 Six Degrees Of Social Influence: Science, Application, and the Psychology of Robert Cialdini

Regardless of whether you’re interested in social psychology, you’ve most likely come across the work of Robert Cialdini. Cialdini has been called ‘the great guru of social influence’ and his book Influence: The Power of Persuasion has sold over 2 million copies. It has been translated into 26 languages, reaching the New York Times Business Best Seller list in the process.

Cialdini spent three years going undercover in writing his book. He applied for various jobs and training positions in order to experience and observe real-life situations of persuasion in action. Since then the book has also been published as a textbook, titled Influence: Science and Practice. Its key ideas can be applied to politics, business, economics, and psychology.

In the book Cialdini identifies and explores the six key principles of influence and persuasion, which he lists as follows:

This new collection of essays was written in honor of Cialdini’s retirement from Arizona State University. In it, several authors draw upon Cialdini’s findings to discuss their own experiences of influence and persuasion, and to further some of the ideas in Cialdini’s own writing.

What becomes clear from the outset is that this book is not intended for the general public. It isn’t going to be on any bestseller lists anytime soon, and certainly shouldn’t be considered as light holiday reading. The essays herein are detailed scientific and psychological studies, and are all written as such. The collection seems to be almost an ode to Cialdini and his ideas. It will most likely be best appreciated by those who are familiar with his work, or who at least hold a fascination for social psychology and ideas of influence and persuasion.

Rewards await those who do take the time to delve deeper into each of the essays, though. Many of Cialdini’s ideas are explored through real-life anecdotes and stories, e.g., infamous hacker Kevin Mitnick’s thrilling account of how he obtained the passwords to hack into the source code of a top-secret Motorola project in 1992. Mitnick’s essay ends with some tips on how to avoid being hacked, reminding us that we should “develop methods of fending off inappropriate requests” which might be as straightforward as “refusing Facebook friend  requests from people not known personally.”

The essays’ content goes far beyond the topic of social psychology alone and touches on numerous other areas of interest, including attachment theory and group bonding. One essay in particular, titled “Social Influence on Reproductive Behavior in Humans and Other Species,” focuses on the social and cultural aspects of reproduction. It offers numerous useful insights to any mental health professionals dealing with families or multi-generational clients. Those who are familiar with the works of John Gottman, James Coan, or Sue Johnson may all be interested to learn about selective investment theory, which highlights the important motivational properties of caregiving. It has paved the way for a paradigm shift in the ways we think about altruism, group selection, social neuroscience, self-interest, and collectivist thinking:

Selective investment theory suggests that social bonds that motivate high-cost helping are instantiated in the brain and that the underlying neural and hormonal features of social bonds and their consequent effect on prosocial behavior have implications for physical health. For example, the hormonal basis of social bonds and helping behavior includes the neuropeptide oxytocin, which not only triggers helping behavior, but also has restorative physiological properties.  For example, oxytocin down-regulates hypothalamic-pituitary adrenal (HPA; stress) axis activity and lowers levels of the stress hormone cortisol, which can be harmful to health with prolonged exposure. Oxytocin is also related to immune function as it is involved in cellular repair, storage of cell nutrients, and cellular growth. Thus, bonding and helping behaviors triggered by the bond may be good for one’s physical health. Indeed, there is a robust association between social relationships and health, such that people in close relationships are healthier and live longer than do those who are socially isolated.

There are 14 essays in this volume, each of them compelling in its own right. It’s unlikely that all of them will interest every reader, but there is doubtless much to enjoy and learn here for those who invest their time and who already hold an interest in the subject matter. Perhaps it is not the best place to start for newcomers to the topic, but for anyone already familiar with Cialdini’s ideas of influence and persuasion or the tenets of social psychology, this is certainly a fascinating read.

Six Degrees of Social Influence: Science, Application, and the Psychology of Robert Cialdini

Six Degrees Of Social Influence: Science, Application, and the Psychology of Robert Cialdini