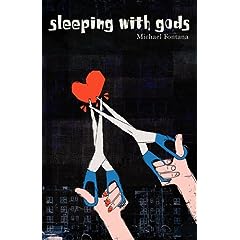 The subject of mental illness has often been explored in works of literature and other media. Michael Fontana’s novel Sleeping With Gods aims to combine a coming-of-age love story with themes of mental health. In Sleeping With Gods, we are told the story of Mark, a young man navigating the mental health system following a suicide attempt. We are immediately given a sense of Mark’s outlook on life in the novel’s opening scene, as he walks into a therapy session donning a “Suicide Squad” jacket. When his therapist expresses her lack of amusement at this particular wardrobe choice, Mark responds “Suicide’s the most laughable matter there is.” The narrator then shares a childhood story that provides a further look at his morbid sensibilities.

Throughout the novel we witness Mark’s growth as he begins relationships with his housemate Daniel and a girl named Leah, both of whom are struggling with issues of their own. It is Daniel who pushes Mark to expand his social horizons, including persuading him to increase his involvement with members of the opposite sex. Though hesitant at first, Mark eventually takes Daniel’s advice and begins to socialize more. During a visit to the mental health clinic, he meets Leah, in whom he immediately takes interest. The novel centers on the relationship between Mark and Leah. Through their story, we see how trauma and emotional distress can make it more difficult to form bonds between people, yet at the same time strengthen those bonds that are made.

As a mental health professional, I can’t help but be compelled to examine the novel on multiple levels. As with any novel, the writing and story need to engage the reader. Yet in a work such as this, I feel it is also important that the reader be provided with an accurate depiction of people with mental illness. All too often the portrayal of characters with mental illness is fraught with stereotypes and inaccuracies. In Sleeping With Gods author Michael Fontana provides a refreshingly realistic glimpse at life with mental illness. There are no overly dramatic scenes depicting characters in a psychotic state. You will not find any mental health facilities described like a setting for a Stephen King story.

Instead, Michael Fontana gives the reader a believable portrait of a young man and his attempt to struggle with depression and other stresses. Whether the main character is meeting with his therapist or having a conversation with his housemate, there is a very natural feel to the dialogue. While Mark is shown be morbid at times, you get the impression that he is really just trying to find his way through the world. Although he might be labeled as “mentally ill,” you get the sense that he in the end he is not all that different from anyone else.

Overall, I have mixed feelings about this novel. On one hand, I appreciate the fact that the author is able to provide an accurate representation of characters coping with mental distress. Mark, Leah, Daniel, and the other characters in the novel for the most part are realistically envisioned. When Mark states that by journaling he is “turning language into a control box for the chaos ensuing around me,” I was reminded of several different clients that I have worked with. I have read many books and seen many TV shows and movies depicting characters with mental illness, and Sleeping With Gods contains some of the most honest, true-to-life characters I have seen.

On the other hand, while the novel has a variety of interesting characters, the plot leaves a bit to be desired. The novel is made of a mix of scenes alternating between various points in the narrator’s life. While these scenes give us a better sense of Mark’s psyche, there are certain points when the reader is left to wonder what a particular anecdote has to do with the central relationship in the story between Mark and Leah. Looked at separately, some of these stories make for an entertaining read. However, it feels as if the novel jumps around too much to give the overarching story any coherent flow.  I don’t want to spoil the novel’s ending, yet I will say that it seemed to be somewhat forced.

Sleeping With Gods is not a must-read novel by any means. Yet I would recommend it for anyone who enjoys coming-of-age stories and is interested in reading one with a mental health angle. Author Michael Fontana also deserves praise for providing a rare authentic take on what it’s like to be inside the mental health system. It would be interesting to see how some of the themes in this work (such as mental illness, suicide, trauma, and recovery) might be further explored as he continues to grow as a writer.