Reviews Home » Sleights of Mind: What the Neuroscience of Magic Reveals About Our Everyday Deceptions 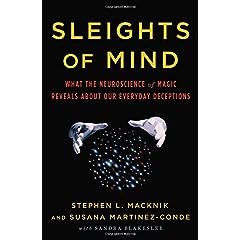 There are literally thousands upon thousands of books about magic—on its history, secrets, teachings, traditions, and rules—but to the extent of the authors’, and this reviewer’s, knowledge, Sleights of Mind: What the Neuroscience of Magic Reveals About Our Everyday Deceptions is the first book that addresses the cognitive science behind the trickery.  Authors Stephen L. Macknik and Susana Martinez-Conde, a married couple, are both celebrated PhDs with the Barrow Neurological Institute, Macknik in behavioral neurophysiology and Martinez-Conde in visual neuroscience.  Their collaborator, Ms. Blakeslee, is a regular science contributor to The New York Times and specializes in the brain sciences.  Together, they have created a work that not only examines how magic can illuminate the inner workings of our brains’ perceptions of the world, but also uses a deeper understanding of cognition to explain how the illusions of magic are successful.
In the authors’ words, “neuromagic” is the “neuroscience of magic,” a term they created to describe the study of how magic is created within our cognitive perception.  They came to this area of study in somewhat roundabout way.  After coming up with the Best Illusion of the Year contest, now in its seventh year, they were asked to chair the Association for the Scientific Study of Consciousness annual conference in 2007.  Because the conference was to be held in Las Vegas, they soon decided that the organizing theme would be to bring together the renowned magicians performing there with the scientist attendees.  The outcome, of course, was a hit, and the authors proceeded to develop their research with the interrelation of science and magic as its driving force.
After the initial setup of what drew the authors to the world of magic, they proceed to explain how illusions are even possible:

“Magicians…exploit the fact that your brain does a staggering amount of outright confabulation in order to construct the mental simulation of reality known as ‘consciousness.’[…] The same neural machinery that interprets actual sensory inputs is also responsible for your dreams, delusions, and failings of memory.” (p. 9-10)

The illusions described and explained in the following chapters fall into three main categories: visual, cognitive, and choice/free will.  Chapters 1-3 deal with how your eyes can trick your brain, most notably by interpreting a visual image incorrectly (e.g. perspective, light afterimages, etc.).  The authors note that most visual illusions actually originated with painters having to overcome the obstacle of a 2-D medium to create scenes and images with depth and shadow.  The Mona Lisa is the most famous example used—her expression, which has mystified many, is hard to pin down because the shadows on her mouth that lead us to deduce that she is smiling are only visible by not looking directly at her mouth.  The result is a different expression depending on where your eyes are focused.
Chapters 4-8 deal with cognitive illusions, including those involving attention and memory.  In fact, the authors point out, most visual illusions are based on cognitive tricks as well.  It is the combination that has the most powerful effect on our perception.  Attentional illusions center on the very simple method of getting the audience to direct their focus to one area of the stage or part of the magician, while the actual trick is happening in an entirely different place.  Because the brain has a limited capacity for paying attention, inevitably a sort of “tunnel vision” results, making it possible for a lot to get by.  In addition, the more you consciously decide to pay attention to an object, the less likely it is for you to notice anything outside of it.
Memory illusions are, in the authors’ opinion, the foundation of all great art: “Indeed, all great art is a violation of prediction” (p.142).  With memory of a past event, e.g. the standard plot of a romantic comedy, comes the expectation and assumption of how a future event will happen.  When our predictions are then “violated,” we are surprised and entertained, being that novelty sparks interest in our brains at a very primitive level.  So when we remember seeing the queen of spades in the magician’s pocket, we assume that it will be there when he reaches for it a few minutes later.  When it turns out that it’s a scarf in his pocket, and the queen of spades is now under his table, our neurons fire in satisfaction.
Finally, see Chapters 8 and 9 to realize how illusions involving choice and free will are among the most powerful in our analytic experience of magic.  When you think you have freely chosen a card from a fanned deck or thought of a number between one and ten, it is all that much more affecting when the trick is ‘magically’ successful regardless of how hard you tried to ensure otherwise. Magicians have many techniques for ‘forcing’ a choice, and the authors explain the effect of this method by detailing how sensory input and attentional focus combine to make us absolutely sure that we are acting with free will when in fact we are simply being manipulated into feeling this way.
After experiencing and studying all of these illusions, the authors decide and start preparing to put on a show themselves, an audition for Magic Castle, the headquarters of the lauded Academy of Magical Arts.  They bill themselves as the first neuroscientist magicians and attempt to use everything they found in their research—which apparently was successful, since they were accepted into the organization.
Their other definition of success in this endeavor is how the study of magic can further scientific goals:

“We propose that the study of magic is now poised to help to derive new principles to optimize attentional resources in people with cognitive decline, as well as to create heuristics to improve education in our schools.” (p. 249)

They have also planned further study on how magic can help evaluate and direct therapies for autism and other developmental disorders.

The final section of the book is the epilogue, entitled “Lessons for Life: Bringing the Magic Home.”  For example: “Magicians know that multitasking is a myth and so they use a ‘divide and conquer’ approach with attention. […] For your best performance, do one thing at a time” (p. 260).  It breaks down tips and observations like that in a numbered list of key takeaways from the authors’ years of research, designed to be helpful in everyday life.
Sleights of Mind is great fun to read, a journey through the fallibility of our collective brains and the ingenuity of both magicians and neuroscientists in examining and exploiting them.  The wit found in evidence throughout the book is first noticed in the title.  ‘Sleight of hand’ is the term most often associated with magicians and their tricks, and so the authors used this recognition to plant their premise of how the mind itself is the cause of much of magic’s trickery, ‘sleight’ being defined as “cleverness, cunning, slyness” (p. 28).  The humor continues throughout, with instances like the following peppering the text: “…neuroscientists know as peripersonal space. (Scientists can never resist a good game of Pin the Greco-Latin Root on the Simple Word.) (p. 75) ”
With wit comes responsibility, however, and the authors are not remiss in noting that magic is practiced by a very secretive and protective community that is loathe to (and in fact has rules against) revealing the secrets and methods that make illusions possible.  There are two reasons why the authors feel they are not betraying the magic community by writing this book:

“Charlatans and frauds abound, taking advantage of unsuspecting or desperate customers who honestly believe in psychic abilities.  These customers are inevitably cheated of money or worse…there is always an illusion involved.  It’s our job to discover how they work.” (p. 41)
“…great magic is not about secrets.  Nor is it all about the tricks, or the methods behind the tricks.  You can find complete descriptions on the Internet of just about every magic trick ever invented. […] [A great magician] will be even more magical if you know the secret and yet the impossibility still occurs.” (p. 242)

To protect the unwilling reader from accidentally finding out the illusions’ secrets and to provide the choice of whether or not the mystery should be revealed, the authors have included “spoiler alerts” throughout the book.  Before each section that contains a magician’s “secret,” the reader is warned (and also then notified when it is safe to begin reading again).  In this reader’s opinion, the alerts are the perfect way to walk the fine line between describing everything to those who really want to know the ins and outs, and protecting those who may want to know the general neuroscience behind the illusions, but don’t want each trick’s methods given away.
Regardless of the spoiler alerts, a verbal description of the illusions only served to confuse this reader in many cases.  There are complex physical and vocal components involved, and the authors thought of this, too—there are videos offered on the book’s related website, www.sleightsofmind.com, which are extremely valuable in understanding how exactly the illusions work.  In fact, there are quite a few tricks and experiments that sound entertaining enough to try out yourself or especially with friends (aka willing guinea pigs).  Look particularly at pages 38, 149, and 168.
The authors did have to navigate the territory between academia and popular interest, a ground which has been covered frequently in recent years (see: The Invisible Gorilla, and anything by Mary Roach, Dan Ariely, or Malcolm Gladwell as examples).  The book is responsibly footnoted and provides annotated references, as any science-oriented work should do, while also attempting to keep jargon to a minimum, to more closely hew to its popular culture aspirations.  The step-by-step explanation of basic brain processes could be frustrating to those already educated in the field, but on the other hand, at the rare points when Sleights of Mind does bog down in technical detail, the layperson may just want to skim.
Their mention of the usefulness of magic to the greater science community and the further research planned for autism and dementia implies a laudable social responsibility that goes beyond merely entertainment as well.  Overall, the balance between the two positions is commendable, and even experienced magicians may gain a more in-depth understanding of their work.
There are three constituencies to whom Sleights of Mind is especially recommended: aspiring magicians, aspiring neuroscientists, and those who are simply curious as to how the abilities and limitations of our minds can be explored.  There are sections, and revelations, to be appreciated by each.
Sleights of Mind
By Stephen L. Macknik and Susana Martinez-Conde, with Sandra Blakeslee
New York: Henry Holt and Company, 2010
Paperback, $26
275 pages

APA Reference
Williams, K. (2016). Sleights of Mind: What the Neuroscience of Magic Reveals About Our Everyday Deceptions. Psych Central. Retrieved on October 28, 2020, from https://psychcentralreviews.com/2016/sleights-of-mind-what-the-neuroscience-of-magic-reveals-about-our-everyday-deceptions/