Reviews Home » Smart Change: 5 Tools to Create Sustainable Habits in Yourself & Others 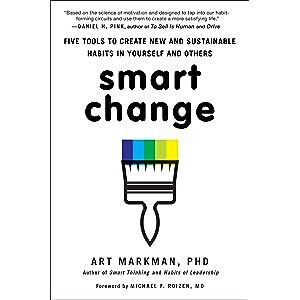 Smart Change: 5 Tools to Create Sustainable Habits in Yourself & Others

The colorful paintbrush on the cover of Smart Change might seem like just another symbol, a welcoming, clean-design image inviting us to read a pop-science book. But, in this case, the illustration is apt: It prompts us to imagine our lives in brighter hues.

When we want change, we often mean we want to create better versions of ourselves, more fulfilling lives — but as most of us have experienced, that sort of change is hard. We start a diet with zeal but give in to guilty-pleasure ice cream bars. Or, we sign up for a gym membership but stop hitting the weights before the month is through. Try, fail, repeat ad infinitum.

Author Art Markman, a professor of psychology and marketing at the University of Texas and editor of the journal Cognitive Science, calls this systematic failure, and he attributes much of it to the detrimental habits we’ve accrued over our lives.

The solution, then, is to reprogram our habits.

It’s a refreshingly simple prescription, and Markman dispenses it with aplomb. His explanation of behavior change is clear and convincing. Our behavior is driven by what Markman calls the motivational system, which is composed of two circuits: the Go System, which tells you to engage in behaviors, and the Stop System, which tells you to refrain from behaviors. We initiate smart change by leveraging the Go System, he writes, the more powerful of the two circuits.

As Markman explains, the brain is lousy at learning to not do things; rather, it’s far more effective at storing successful behaviors. So when we’re hungry, instead of telling ourselves to avoid potato chips, we should tell ourselves to reach for a bowl of fruit.

Markman’s sensible advice extends throughout the chapters in which he describes the five “pressure points” of the motivational system. These pressure points are elements in our lives that we can affect to make behavior change easier.

The first of these is optimizing your goals: being specific about why you’re pursuing a goal, identifying potential obstacles, and thinking about what it means to succeed. Markman presents the solid concept of breaking down large goals into sub-goals, though he veers into stilted terminology along the way. Sub-goals, he says, are “achievements,” while large goals are “contributions.”

The idea behind the latter is that just as you can make a contribution to an organization, you can make a contribution to yourself. While the term might work for management guru Peter Drucker (from whom the term is borrowed), it feels unintuitive and unnecessarily formal in this self-improvement book — no small matter, as the word is used often throughout the text. Perhaps the clear and simple terms “achievement” and “goal,” properly defined, would have served the book better.

Fortunately, this minor wording stumble is far outweighed by the enlightening advice in the rest of the chapter. Markman, for example, recommends setting objective measurements to help judge whether you’ve reached your goals. If you’re learning to play the saxophone, set a clear-cut benchmark — something like, “I will be a member of a band.” It’s far more effective, he writes, than the nebulous promise “I’ll like the way I sound.”

Arguably, the book’s most outstanding advice is Markman’s encouragement to create what are called process goals rather than so-called outcome goals. If you set an outcome goal, you might strive to lose 25 pounds. But once you’ve achieved that goal, you might have trouble keeping the weight off: crucially, you may not have developed the behaviors to sustain your new weight for the long term.

Instead, by creating process goals, you make commitments like eating fruits and vegetables daily and working out on a consistent basis — along-the-way behaviors that will not only help you lose those 25 pounds but also keep them off.

Markman’s other pressure points include energizing the Go System, controlling the Stop System, managing your environment, and engaging with other people. He shows us how to make detailed plans for the Go System to create good habits, and then demonstrates the fragility of the Stop System (use it to halt behavior sparingly, he says, lest it become worn out too quickly).

Next, he shows how the way we set up our surroundings can affect our behavior, and how the people with whom we interact can help or hurt us in achieving our goals.

His tour of the motivational system’s pressure points is comprehensive, and it’s corroborated by other accessible, bestselling works such as Willpower: Rediscovering the Greatest Human Strength and Change Anything: The New Science of Personal Success. Additionally, Markman’s guide to changing other people’s behavior is credible, revolving around the themes of authenticity and setting the right example for your friends and loved ones.

Essentially, Markman has taken the generally haphazard process of change and created structure around it. And the structure is sound.

Smart Change is more than a work with a pretty cover; it’s as intelligent and illuminating as its title implies. It is, you could say, a manual on how to improve our lives with broad, strong brushstrokes — and colorful, hopeful ones at that.

Smart Change: Five Tools to Create Sustainable Habits in Yourself and Others

Smart Change: 5 Tools to Create Sustainable Habits in Yourself & Others

APA Reference
Reviews, B. (2016). Smart Change: 5 Tools to Create Sustainable Habits in Yourself & Others. Psych Central. Retrieved on July 14, 2020, from https://psychcentralreviews.com/2016/smart-change-5-tools-to-create-sustainable-habits-in-yourself-others/