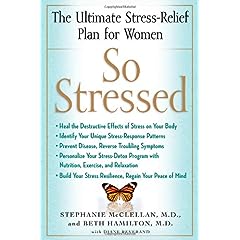 So Stressed: The Ultimate Stress-Relief Plan for Women

In the self-help guide for stress reduction, authors Stephanie McClellan, M.D. and Beth Hamilton, M.D. give an in-depth description of the short- and long-term effects of chronic stress and suggestions on how to better cope with inevitable stress.  So Stressed: The Ultimate Stress-Relief Plan for Women does something that most books about stress do not.  It classifies stress relief into three distinct areas: nutrition, exercise, and restoration.  Instead of just telling the reader to exercise, relax, and consume a healthy diet, the book elaborates on why each one is so important to not only one’s physical health but stress levels as well.  Toward the end of the book, the authors compiled suggestions from the aforementioned areas and formulated a plan based on a woman’s particular stress type.

Women are more likely than men to suffer from stronger consequences of stress due to both physical and societal influences.  Within the female sympathetic and parasympathetic systems, stress hormones have a tendency to linger longer than within a male’s respective systems.  Societal demands on women also affect women’s stress levels.  Women are now expected to take on many roles, including both a career and childrearing, when fewer than 100 years ago, women were allowed to be concerned only with taking care of children.

Drs. McClellan and Hamilton went a step beyond most other stress reduction references.  Instead of lumping all stress types together, the authors distinctively describe four stress types: HyperS, HyperP, HypoS, and HypoP, each with its own stress detox program.  Stress reactions were divided by Hyper vs. Hypo and Sympathetic (S) vs. Parasympathetic (P).  Hypo and Hyper are in reference to the hormonal levels that are released during stress. Hyper refers to the overproduction of a hormone called cortisol, while Hypo refers to an underproduction of cortisol.  S and P are representative of the sympathetic and parasympathetic nervous systems that both play a role in stress and stress relief.  The sympathetic nervous system is the part of the central nervous system that is active during the “fight-or-flight” stage that occurs when one is exposed to stressful stimuli.  The parasympathetic nervous system is the part of the central nervous system that helps restore one’s body to a normal state of allostasis or homeostasis when fluctuations occur.  When either of these nervous systems or hormone production is off balance, in either direction, the ability to successfully cope with stress can be compromised.

Within their clinical practice, McClellan and Hamilton saw that there were many different stress responses as well as different characteristics that pertained to each stress type.  HyperSs have a tendency to be in a state of overdrive because their bodies are constantly in the “fight-or flight” mode, in addition to an overproduction of cortisol.  HypoSs are usually relaxed but when something stressful happens, HypoSs are apt to have a large reaction to it.  According to McClellan and Hamilton, these people are “stress-sensitive.”  HypoP, according to McClellan and Hamilton, appears to be extremely rare.  Because of the lack of cortisol and the inactivity of the sympathetic nervous system, people with this type of stress response are usually withdrawn from the world and have deemed themselves helpless. HyperPs have a tendency to go and go until they literally cannot go anymore. This category of people has an overproduction of cortisol which carries them through all the stressful events.  But after a stressful event, the parasympathetic goes into overdrive and causes the individual to collapse.

Once the different types of stress reactions were laid out, the authors then described ways to relieve stress in accordance to one’s particular stress type.  Each plan reviewed particular diets, exercise, and relaxation techniques that were covered in previous chapters.  Each stress type had a different plan that was supposed to help with the problems associated with that particular stress type.  For instance, individuals with HyperS stress reaction should not drink coffee due to the caffeine.  Caffeine is a stimulant and since HyperS types are naturally overstimulated, avoiding synthetic stimulants would be in their best interest.  The authors advised that HypoS stress types should eat a low-glycemic diet due to their risk of insulin resistance and type 2 diabetes.  The conclusion of the book included a simplified chart of each stress type and the suggested stress reduction plan.

In my opinion, the authors did a brilliant job at establishing a baseline of knowledge.  At the beginning of the book they provided an in-depth explanation regarding what happens to person’s body when they are at a normal stress level.  McClellan and Hamilton then built upon that baseline knowledge by thoroughly explaining what happens to a person, physically, when they become stressed. The affiliation of different plans for women within the different stress reaction types is appreciated.  The authors acknowledge that not everyone handles stress in the same way and they deliver adequate suggestions as to how an individual could realistically manage stress.

So Stressed: The Ultimate Stress-Relief Plan for Women