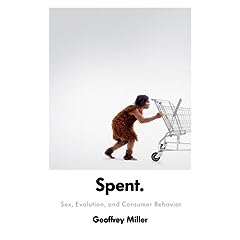 In his new book Spent, leading evolutionary psychologist Geoffrey Miller takes us on a journey through modern consumerism. He explains how and why we choose to buy the things we do, and what these choices say about us, both as individuals and as a society.

Approaching the issue from a systemic perspective, Miller looks at the ways in which marketing concepts have permeated mainstream culture, suggesting that we now live in an Age of Marketing which marks a “decisive power shift from institutions to individuals.” Miller explores the numerous ways in which this power shift has affected human behavior, from the hidden instincts behind our shopping and spending to the traits we value most in our romantic partners. He states that “marketing is not just one of the most important ideas in business. It has become the most dominant force in human culture.”

As a marriage and family therapist, I have to admit I was initially a little reluctant when faced with reviewing this book, which ostensibly seemed to be a study of market forces and economics. I needn’t have worried. Spent is a fascinating study of human behavior, using consumerism as the starting point from which to explore the evolution of human psychology and the ways in which we have all become consumers, even in our private lives. Miller’s book is written in a style that will appeal to anyone who is interested in these topics, and it doesn’t require any kind of previous knowledge or expertise:

As well as being accessible and easy to understand, Miller’s writing style is engaging and humorous, and he frequently peppers his prose with amusing personal anecdotes and pop culture references. I quickly found myself deeply entranced in the book, eager to keep reading, and fascinated by all of the facts he revealed in each chapter.

In fact, the more I read Spent, the more Miller’s insights into human behavior reminded me of the work therapists do with their clients — trying to identify the driving forces that lead us toward the choices and decisions we make for ourselves throughout our lives.

Marketing’s empiricism works like Rogerian psychotherapy, in which the therapist restates and reflects the patient’s concerns. Marketing holds up a mirror to our selves, reflecting our beliefs and desires so we can recognize, remember, evaluate and transform them… It allows us to accept or reject potential ways of displaying our traits through our product choices.

Miller suggests that there are six main personality traits (known as the “Central Six”) which all of us display as a means of “taste-signaling,” and which we also all assess when evaluating potential partners, as a means of “social screening.” These are:

He goes on to analyze each of these traits in detail, explaining how we “market ourselves” to others, primarily as consumers, by supplementing each of these traits with a specific choice of product, brand, or lifestyle choice according to our own individual tastes. Marketing enables us to establish our preferred identities by aligning ourselves with certain choices, and we make these choices in order to impress others, as a means of establishing our status and attracting potential mates. These choices are known as fitness indicators, which Miller defines as “signals of one’s individual traits and qualities that are perceivable by other individuals.”

The irony of this, says Miller, is that we already have these indicators within us, as inherent traits, regardless of consumerist capitalism:

The most desirable traits are not wealth, status, and taste – these are just vague pseudo-traits… Rather, the most desirable traits are universal, stable, heritable traits closely related to biological fitness – traits like physical attractiveness, physical health, mental health, intelligence, and personality… Consumerism’s dirty little secret is that we do a rather good job of assessing such traits through ordinary human conversation, such that the trait-displaying goods and services we work so hard to buy are largely redundant, and sometimes counterproductive.

This is the central message of Spent — a timely reminder that the obsessive capitalist demands to which we constantly subject ourselves are not only unnecessary, but also often unhealthy:

We humans have already spent millions of years evolving awesomely effective ways to display our mental and moral traits to one another through natural social behaviors such as language, art, music, generosity, creativity, and ideology. We can all do so without credentials, careers, credit ratings, or crateloads of product… Runaway consumerism leaves us feeling superficial and empty, because we project ourselves outward to observers too promiscuously and desperately.

So, having identified this painful cultural phenomenon, how do we eschew these unnecessary values which capitalism has taught us? How do we rid them from our private lives? Far from suggesting that we go back to living like our Cro-Magnon ancestors, Miller concludes his book with several chapters on this topic, with numerous ideas on how we can improve our quality of life, not just as individuals, but on a wider societal level, too. Miller’s suggestions range from simple changes to our consumer habits (such as buying locally or second-hand, or even making things ourselves), to having our personality traits tattooed onto our bodies as clearer fitness indicators for potential partners. He also supports the concept of a consumption tax – whereby every product or service is priced according to its ecological footprint and impact on the environment – and the idea of restructuring the ways in which we build our communities, so that likeminded people can choose to live together, based on shared common interests and ideas, rather than for economic reasons alone.

Sure, some of these ideas may seem a little far-fetched or idealistic, but we have to start somewhere, and Miller’s crusade is a noble one. He concludes by asserting that the best method of implementing any change within society is by changing our informal social norms, one at a time; the unspoken rules which we all take for granted at a local level. We could all do a lot worse than to live by Miller’s suggestions, and for those who may want to take things even further, Miller provides some exercises for the reader, and a booklist for further reading.

Spent is an entertaining and fascinating read, and I would highly recommend it to anyone with an interest in human behavior or evolutionary psychology. Miller’s explorations of consumer behavior caused me to completely reassess even the most mundane choices I make every day, and the things these all say about me, including my music playlists, the video games I play, my personal fitness, my Facebook page, my choice of friends and partners, and even the bumper stickers I put on my car. Whatever your background, I guarantee that Spent will make you reevaluate some of the assumptions you had previously taken for granted about your own lifestyle and behavior traits. And you’ll never play The Sims in quite the same way again.