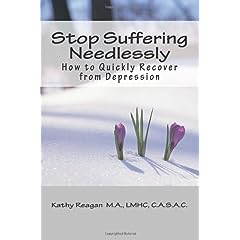 Almost everyone reading this review – particularly those in the mental health field – will have had first-hand experience of dealing with depression at one time or another, whether the sufferer was a client, a relative, a friend, or themselves. The World Health Organization predicts that by 2020, depression will be the second largest cause of suffering in the world, second only to heart disease. Depression affects over 15 million Americans alone, and is one of the most prevalent and debilitating mental illnesses in the world today, often going undiagnosed and untreated. So there is no doubt that this is a topic which deserves to be written about, and which requires serious attention.

With her new book Stop Suffering Needlessly, Kathy Reagan joins the host of other self-help authors who all proclaim to be able to offer their readers the secret cure to depression. The back cover of Reagan’s book suggests that “If you’re one of the majority of people who aren’t receiving any treatment for your depression, this book will teach you everything that you need to know to recover quickly.” The cover also promises that “Stop Suffering Needlessly will benefit you, whatever your age, gender, ethnicity, geography, socioeconomic status, sexual orientation, or religious beliefs.” Bold statements indeed.

Unfortunately, on just the second page of the book, these promises begin to come undone, when Reagan says:

Whether we suffer as a result of things we can or cannot control, I believe that there is value in suffering. I believe that God gives all of us at least one opportunity, if not many opportunities (especially for those of us who don’t get it the first time), to fall to our knees, acknowledge our weaknesses, and ask for help. Maybe that’s the lesson to be learned when we suffer. Maybe learning to finally ‘let go and let God,’ and rely on a Power greater than ourselves, is the true value of suffering.

Reagan goes on to explain that:

I believe that there is a Divine plan, which calls each of us to heal from whatever suffering we may experience, to learn and choose to be happy, to pay it forward, and to grow toward our Maker. This is why I wrote Stop Suffering Needlessly.

It quickly becomes clear that this is not a book which would appeal to the general populace. In fact, Reagan seems to be writing exclusively for a very specific audience here: those who share only her own religious beliefs. One of Reagan’s concluding remarks tells us to “Learn to give up control, rely on God or your Higher Power,” and to say the Serenity Prayer daily. The book will also be of most relevance to American readers, as Reagan quotes only from American television shows throughout, and all of her statistics are taken from the American Psychological Association (APA).

This is a disappointing approach to the topic, as it will immediately alienate a huge part of Reagan’s potential audience from her book and limit it to a niche market; rendering many of her suggestions invalid and not applicable to other people. It is also a surprising one, as one would not expect to find such a polarizing opinion in the field of mental health advice or self-help, especially coming from someone who has worked as a professional therapist for almost 20 years. Far from the unbiased, open-minded and nonjudgmental approach we might expect, Reagan makes no hesitation in stating her own beliefs, and repeats them again and again throughout her book, seemingly imposing them on her readers:

I believe that guilt and shame are gifts to help us become better human beings. Following the Ten Commandments for example, is a wonderful guide for our conscience and behavior, and feeling and experiencing some guilt for breaking a commandment can help us do better.

At best this makes Reagan’s book come across as one which should only be read by a select readership, but at worst it comes across as patronizing, insulting, or downright irresponsible. I can only hope that Reagan has adopted this tone for her writing alone, and does not voice her personal beliefs so openly in session, with her clients.

Sadly, the problems with this book do not end at Reagan’s insistence on expressing her beliefs, but continue to emerge as she gives her advice on the topic of depression and its cures. Reagan’s suggestions are purely anecdotal; drawn from her own memories and personal experiences, rather than from any kind of professional research or actual facts. She scatters the phrases “in my experience” and “in my opinion” frequently throughout her book, but fails to back up her theories with any proof or further evidence, instead supplying the reader with occasional quotes from TV shows:

Rejection is God’s protection is a line from a recent episode of ‘Law and Order.’ If you’ve experienced rejection (who hasn’t at one time or another?), consider the possibility that this statement is true. If you’re suffering from the loss of a relationship, is it possible that God is protecting you from some future danger or sorrow that you can’t see? Or that God has something better planned for you in the future?

It’s common for people who experience depression, and women in particular, to lose a sense of themselves, especially if they have been trained to be care-givers for their partners, children, or others. Do you know who you are and what you need? Do you even have a clue what you need? Many women do not.

As seen here, Reagan has a tendency to pepper her prose with incessant questions, one after the other, presumably aimed at her imaginary readers. Unfortunately these have the effect of making it seem like the author herself is not sure of the answers, and at times make the book completely unreadable, as the text dissolves into entire paragraphs of theoretical questioning and rhetoric.

I do not wish to be overly critical here, as there are a few snippets of worthwhile information hidden among the text. Some of Reagan’s stories do contain interesting suggestions and techniques, and she supplies a useful collection of links and resources in her Appendix. Her nine steps toward taking control of depression may also be of use to some readers:

However, whenever Reagan seems to latch on to something of interest, or to present a promising theme, she just as quickly goes on to contradict herself, or undo her sentiments entirely. In an early chapter Reagan writes:

Have you ever heard the phrase’ Just pull yourself up by your bootstraps?’ Or ‘Just think positively!’ These old simplistic and cavalier responses to people with depression now sound ridiculous, knowing that depression is a medical illness. As if depressed people could do just that and recover easily… Effective treatment for the medical illness of depression involves more than trite solutions.

Then, just a few pages later she says:

Even if you currently don’t have health insurance, that doesn’t mean that you cannot receive recommended treatment if you want it. You are likely still eligible for some kind of assistance or program, so if you want help, ask for it.

And again, in another chapter, Reagan repeats this sentiment:

Do what you need to do to obtain care. Some health care providers also provide pro bono (free) care. Some retail and drug stores offer free walk-in services too. If you need treatment, you can find it.

These simplistic and cavalier suggestions do indeed come across as ridiculous, particularly as Reagan herself dismissed them earlier, and they seem to lack the sensitivity or understanding one would expect from an author in this field. One can only wonder how a seriously depressed reader might feel, if they turned to this book during a time of utter desperation and exhaustion, only to find such unsympathetic, matter-of-fact advice. Even the book’s title, Stop Suffering Needlessly, seems accusatory and blunt when taken in this context.

Even though I operate from a strengths-based perspective and believe in carrying this approach across to all aspects of my life — including book reviews — it is hard to find many positives in this self-published text. It may conceivably be helpful to the few readers who happen to share Reagan’s exact outlook on life and her religious beliefs, but otherwise it would be best avoided. There are numerous other books on offer which cover this same topic, and do so far better, without any sense of discrimination or prejudice against their readers, and with a grounding in reputable clinical experience and scientific fact, all of which are lacking here.

Reagan is right about one thing: the effective treatment of depression definitely does involve more than trite solutions. Unfortunately, those are all you’ll find in this book.

6 Healing Habits of Adults Who Recover From Childhood Emotional Neglect

4 Indications of a Psychopath at Work

Don't Attack the Caregiver If You Won't Help At All. It's Really Bad Manners.

What Dr. King Understood About Rage and the Trauma of the Unheard