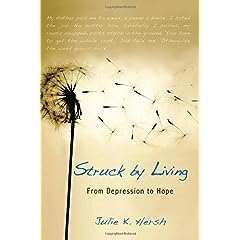 Any memoir opening with “I tried to kill myself three times” has the imperative to deliver on the promise of importance, conflict, and resolution inherent within that declaration.  For author Julie K. Hersh, Struck by Living: From Depression to Hope is a promise as well—a promise that she will continue to do whatever it takes to prevent herself from succumbing again to the mind-bending spiral of mental illness.  The book opens with a description of her third suicide attempt, and explains the remarkable stroke of luck that precluded its success before moving into a reassuring timeline of flashbacks to her childhood, previous treatment in a locked psychiatric ward, her two prior suicide attempts, how she met her husband, etc.  Switching back and forth between the past and the ‘present,’ Hersh tells her story with an engaging candor and finishes with a resolution to help others who are suffering the way she has.

According to the National Institute of Mental Health, suicide is the eleventh leading cause of death in the United States, and for every death, there are 12 to 25 attempts that were for some reason unsuccessful.  It is a testament to both Hersh’s support system and her willingness to accept treatment that she is included in the latter statistic rather than the former.  Hearing directly from someone who has dealt with the desire to take her own life for most of her adulthood is affecting in a way that statistics and secondhand anecdotes simply aren’t.  Hersh also raises the continually controversial spectre of electroconvulsive therapy (ECT), trying to combat the public’s pervasive perception of “shock treatment” as something directly out of One Flew Over the Cuckoo’s Nest.  In the literary world, these delicate issues are often sterilized in scientific materials or entirely sensationalized.  Struck By Living is one of the rare works that refuses to hew to either side of this divide.

As mentioned above, Hersh begins her story with an account of her decision to die. She details her options—“I weighed alternatives with precision, a chart forming in my mind.  Each plus and minus lined up with cold logic” (p.1)—and decides to go with carbon monoxide poisoning in her garage.  After this attempt is miraculously thwarted by an architectural idiosyncrasy, she exits her car and goes straight into a locked psychiatric ward for the second time in her life.  The following chapter is the first of many intermittent jumps in time, this one flashing forward seven years to a risky, yet ultimately very beneficial move from Dallas to London.  She uses the move to define her attitude toward her mental illness:

I respected my genetic bent for depression, but didn’t want my identity defined by fear.  After radical treatments, psychotherapy, volumes of writing, and endless discussions about what happened, I knew my tendencies like rote math facts, practiced with flash cards and burned into my brain. […] Life in a box, afraid of another stint in a psychiatric ward, didn’t match my plans. (p.9)

We are then taken, in chapter order, back to the psychiatric ward where Hersh makes the difficult decision to undergo ECT and begin her process of recovery, followed by a movement through different influential times in her childhood, adolescence, and college years, including an episode of inexcusable sexual abuse by a doctor treating her for pneumonia.  Once her husband, Ken, and their move into high-society Dallas life enter the picture, Hersh’s depression rears up in full force, and progression through the cycle of despair and hope begins:

Depression blunts nerves, divides the holy trinity of body, mind, and spirit into three separate and lesser parts.  Without depression, I know things to be true even when they are intangible.  With depression, I split.  My mind and body conspired against each other while my spirit, my rudder, splintered. (p.188)

I was numb, the walking dead, a ghost in a body once vibrant.  Soon, soon, life will be over, soon[…] No lingering on last meals or last thoughts.  I already felt dead. (p.4)

Okay, let’s say under the best possibility there is no afterlife. Let’s assume you just die.  Do you want to lie in that ground and feel nothing, see nothing?  Miss this?  Forever? (p.190)

No one, including me, could believe I almost took my own life.  I almost did.  This strange brain of mine took a world of possibility and created lemons, only to twist life again for a drink tart but sweet. (p.214)

Throughout it all, she uses writing to remain somewhat centered in the chaos, and over time learns to identify her pattern and triggers in order to avoid repeated descent into the depths of her disease, admitting, “I suppose some life stresses are timeless” (p.114), but also recognizing that “Life is dependent on a fine balance of electricity, chemistry, and choice.  Of these three, choice is the most immediate and decisive” (p.217-18).   Tellingly, the last sentence of the book, relayed after an anecdote of Hersh giving an affecting speech at a Suicide and Crisis Center fundraiser, is “I choose to live.”

The initial impression of Struck By Living, garnered from the book jacket, does not bode well—the title is incorrectly given as Stuck By Living, and the book is described by Hersh herself as a “fast-paced novel” with a story that is “difficult to abandon.”  While at least the second part of this evaluation is true, hearing it directly from the author as a first introduction to the book is somewhat off-putting.  To be fair, though, it is entirely possible that these were publishing, rather than editorial, choices out of her control.

Hersh’s writing flows nicely, carrying the reader gently, but vividly, over the whitewater of the subject matter.  She does occasionally descend into cliché—“The mind is a fragile thing” (p.30); “I stood at a new phase of recovery” (p.37)—but with the current presence of pop-psychology jargon in society, a phenomenon she even references at one point, it is hard to avoid while maintaining accessibility.  Her attention to detail and accuracy is appreciated, especially considering her admission that due to ECT treatments and the general symptoms of depression, her memories surrounding certain times are foggy or nonexistent.  In these cases, Hersh uses her past journal entries as well as accounts from family and friends to corroborate and fill in the blanks.

If you have suicidal thoughts, would like to support someone who does, or simply desire broader understanding of an often-fraught subject, Struck By Living is a good choice for a healthy, involving read.  Hersh’s difficult and ultimate commitment to live is inspiring and reassuring.  Her subsequent dedication to activism and advocacy is supported by a helpful list of recommended resources at the end of the book as well as an afterword on the science of ECT.

This combination, in the end, is what is most valuable about Hersh’s book.  Her refusal to gloss over the fact that dealing with suicidal tendencies is incredibly difficult, combined with her conviction that it is possible to make the choice to live, means that Struck By Living is worthy of serious consideration from anyone wanting to know more about depression, suicide, and their combined effects on self and others.