Reviews Home » Subliminal: How Your Unconscious Mind Rules Your Behavior 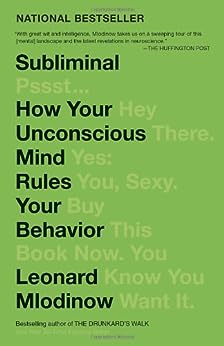 Wine connoisseurs, picky shoppers, and many others may bristle at Subliminal: How Your Unconscious Mind Rules Your Behavior. We don’t like to be told that we make our decisions not on logical and reasonable grounds, but for far less obvious reasons, sometimes acting against our own best interests. Yet that is exactly what author Leonard Mlodinow shows us — and it’s fascinating.

Mlodinow looks back at various early psychological schools of thought along with current research and thinking. He begins by quoting Carl Jung:

“There are certain events of which we have not consciously taken note; they have remained, so to speak, below the threshold of conscious. They have happened, but they have been absorbed subliminally.”

Jung understood quite well the importance of the unconscious in our decision-making. Here, Mlodinow focuses anew on the interaction between our conscious and unconscious thinking processes.

The book is a comprehensive and engaging exploration of old and fresh ideas. Readers will find a sweeping review of important psychological research illustrated by an interesting array of supporting evidence regarding perception, decision-making, and the influence of others on our behavior.

Mlodinow discusses what he calls our “two-tiered brain,” referring to the interplay between the conscious and the unconscious. “How much of our feelings, judgments, and behavior is due to each can be very hard to say, as we are constantly shifting back and forth between them,” he writes. He also shows how we tend to ascribe our behaviors and feelings to one source, when clearly another is at play. To do this, he recounts in an engaging way the experiences of his own mother, who experienced loss and danger during World War II and was forever influenced by the wrenching change in her environment from a loving and safe family to the horrors of concentration camps. His mother’s behaviors throughout the rest of her life were obviously in reaction to those terrible experiences, Mlodinow tells us, yet she attributed her behaviors only to more mundane sources.

“Most of us are satisfied with our theories about ourselves and accept them with confidence, but we rarely see those theories tested,” he writes. “Scientists, however, are now able to test those theories in the laboratory, and they have proven astonishingly inaccurate.”

Mlodinow also gives several examples of modern behavioral economics, showing that what we purchase is influenced greatly by extraneous factors, such as packaging, advertising, and price, rather than on quality or need. He includes a detailed discussion of the neuroscience behind our decision-making, and makes clear that we perceive things according to our mental models and expectations, rather than based on an objective reality.

The book also highlights the human ability to remember — along with our very human tendency to remember things incompletely or incorrectly. Mlodinow takes us back to both the Watergate scandal and several high-profile criminal cases to demonstrate the frequent disconnect between what we think we recall and what really happened.

Next, Mlodinow turns to our interactions with other people and the influence they have on our behavior, perceptions, and decisions. He reinforces the importance of belief in self. Here, he cites Robert Rosenthal’s famous research on the power of expectations to influence actual behavior. Rosenthal showed that teachers’ perceptions of students’ abilities affected their interactions with those students — and, consequently, how well those students actually did. With this, Mlodinow leads into a discussion of nonverbal and verbal communication, including vocal tones and a variety of other subtle human tendencies we’ve developed over eons in order to survive.

As further evidence of the power of communication in different forms, Mlodinow cites the notoriously poor ratings that viewers in 1960 gave Richard Nixon after his televised debate with John F. Kennedy. Those who listened to the debate by radio felt that Nixon was the clear winner, while those who watched on television gave the edge decisively to the younger and more photogenic Kennedy. Indeed, Mlodinow explains, appearance and nonverbal cues mean a lot. Humans will, in fact, assign competency to someone who looks the part, even when any concrete support for that belief is lacking.

Research on stereotyping ties in here, too. Mlodinow describes work done with the Implicit Association Test (IAT), which uses a series of mental associations to assess a person’s ability to clearly and correctly identify groupings. The crux of the findings is that under pressure of time, we clearly tend to resort to stereotypes based on “automatic, unconscious processes” rather than on the more rational mechanisms we believe our minds are using.

A section in the book regarding group interactions was particularly interesting. Mlodinow starts by discussing the classic 1950s Robbers Cave experiment, where two groups of indistinguishable young boys were randomly separated into two groups. As the groups became aware of each other, the boys ignored similarities and became acutely aware of perceived differences — to the point of extreme competition and an “us versus them” environment. A number of other studies found much the same thing: that we are easily divided into groups based on superficial or even fictional differences, and that this can lead to stereotyping, bias, discrimination, and even violence. As Mlodinow comments, “… even when group divisions are anonymous and meaningless, and even at their group’s own personal cost, people unambiguously choose to discriminate in favor of their in-group, rather than acting for the greatest good.”

The book is written in an appropriately formal-yet-readable style. Mlodinow’s transitions are well crafted: Each section has an ending that serves as both a summary of what has just been discussed and a link to what’s coming next. While one might consider this a basic element of good formal writing, the flow of summary-preview-review is done poorly or is totally absent in many books. Mlodinow’s attention to flow enhances the readability and, ultimately, the usefulness of his work.

The book also makes good use of illustrations, personal stories, historical events, and academic research, blending these various tools into a narrative so that readers can more fully understand and integrate the information. Mlodinow brings us his message with variety, richness, and depth.

If you are familiar with the work of Dan Ariely, Daniel Kahneman, or other contemporary minds who explore why we do what we do, your understanding of neuroscience, behavior, and social context in decision-making will be even stronger after reading this book. If this is your introduction to social neuroscience, it will provide a comprehensive and engaging welcome to this fascinating area of study.

And, despite what readers may think, Mlodinow shows that subliminal forces aren’t necessarily something to bristle at. Ending on a positive note, he wisely observes that our unconscious “is at its best when it helps us create a positive and fond sense of self, a feeling of power and control in a world full of powers far greater than the merely human.”

The Need to Please: The Psychology of People-Pleasing

Ghosting, Catfishing, Benchwarming and Breadcrumming: Terminology of the Dating World