Reviews Home » Parenting » Suffer the Children: The Case Against Labeling and Medicating 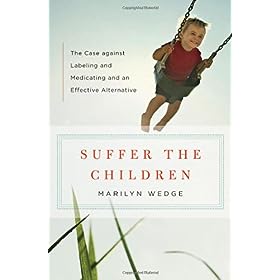 Suffer the Children: The Case Against Labeling and Medicating

When a child has an emotional or behavioral problem, their school often recommends that they see a psychiatrist. This psychiatrist typically labels the child with a disorder, then advises the parents that the child should be given psychiatric drugs. Millions of children in America have been diagnosed through this process — but not everyone believes it’s a healthy one.

Among those who aren’t comfortable with it is Dr. Marilyn Wedge. A family therapist and child advocate, Wedge has written Suffer the Children: The Case against Labeling and Medicating and an Effective Alternative, which features her own child-focused family therapy based on more than two decades of experience. Her book provides a number of excellent creative strategies that help children cope with stress, sadness, aggressiveness, anxiety, and compulsive behaviors without the negative effects of being labeled or the possibly harmful use of drugs.

Wedge writes, “I am confident that the therapeutic strategies I bring to life on these pages will empower you to deal with the most thorny of problems, the most difficult of challenges. My goal is always to help families help themselves without the use of drugs or stigmatizing diagnoses.” Her book provides not only a coherent discussion of the basis of her therapy but demonstrates, through her many stories of success with her own patients, that there truly is an effective alternative.

The epidemic of child diagnosis has increased dramatically in recent years. As the author notes, “More than four and a half million children in the United States have been diagnosed with ADHD. The number of children diagnosed with bipolar disorder is also exploding; by 2009, more than one million youngsters had been labeled with this serious affliction, which in the past had been thought to strike only adults.” What rightfully troubles Wedge is the labeling of children with such disorders and the application of drugs that were originally used only for adults.

She observes, “There is no doubt that pharmaceutical treatment has helped millions of seriously disturbed adults lead normal lives; but when it comes to children, there is no indication at all that either the diagnoses or treatments that work for adults apply to kids. Moreover, as I show in the chapters that follow, since the turn of the twentieth century, alarming evidence has accumulated that psychiatric drugs hold real dangers for children, including hallucinations, abnormal breast growth in boys, weight gain, and cardiovascular problems.” On the other hand, her techniques, she notes, can be done without reservations or fear because they do no harm.

Wedge’s strategy doesn’t seem as reductionist as those found in mainstream psychiatry. Instead, it’s based upon systems theory as espoused by the English anthropologist and social scientist Gregory Bateson.

Rather than isolating a problem within an individual, Wedge views it as existing in the relationships within a family, the entirety of which may be viewed as a living organism. In fact, as she points out in her own case studies, when families try to treat problems as if they were located within children but do not treat the family as a whole, the child may improve but problems often reappear in others within the same family.

To begin to see the root of a problem, Wedge often begins her therapy by asking the troubled child, “Are you more worried about your mother or your father?” Often, Wedge says, the child manifests symptoms in an attempt to protect the parent they worry the most about. To combat this tendency, Wedge tells the child that she is now in charge of taking care of the adults — removing the child from what they would otherwise see as their duty. Because of the importance of relationships in her treatment approach, Wedge often recommends parents not fight or discuss their problems in front of their children who often imagine these worse than they actually are.

Wedge combines this family systems theory with narrative therapy. Narrative therapy is based on the ideas and practices of Michael White, David Epston, and other practitioners who have built upon their work. It holds that our identities are formed through the stories we tell of our own life. Through questioning and collaborating with patients, Wedge helps people “reframe” their life story and rewrite it so that the relationships within the whole of the family regain a healthy homeostasis.

An important idea in narrative therapy is the separation of persons from their problems — a reason Wedge gives for opposing labels or diagnoses, which can stigmatize. Rather than letting individuals identify themselves with their ADHD, suicidal, autistic, bipolar, or other label, she uses a technique called “strategic dialogue” to work directly with the difficulties themselves.

The author believes that strategic dialogue is one of her most valuable interventions. While it appears to be simple dialogue between the child and the therapist it is in fact much more involved. She writes,

It is a gentle strategy, seemingly simple on the surface but actually complex. The questions are not aimless. As in the ancient Socratic dialogues, or the hypnotic techniques of Milton Erickson, the questioner has a final goal in mind and carefully sculpts her questions to reach that goal. By giving the illusion of alternatives, the questioner creates a new feeling right in the session that will be the beginning of a change in the child’s perceptions of herself and her world.

Through examples, Wedge shows how the subtleties of metaphor and multiple levels of meaning are embedded within these narratives. She writes, “If a child is angry and explosive, I immediately ask who else in his family might be angry and explosive, even though the other family member may express those feelings in a different fashion.”

She reports seeing this with her client Joey, whose outward anger was a reflection of his father’s inner rage about his job. “Just as patients speak on two levels of meaning at once,” she tells us, “therapists must be able to move from the literal to the metaphorical and sometimes vice versa.”

She describes an example from family therapist Milton Erickson, concerning a schizophrenic patient who insisted he was Jesus Christ. Erickson approached this patient on hospital grounds and said, “I understand you have had experience as a carpenter.” Based on his story, of course the patient had to say that he had.

Erickson used this to involve him in building a bookcase and later in more productive work, which turned out to be quite therapeutic. By moving from the metaphor of the suffering Jesus Christ to a literal interpretation, Wedge says, Erickson was able to provide help.

Wedge’s respectful, non-harming, child-focused family therapy is brief; supposedly, it often brings profound results within eight sessions. Her book presents a bold, informative critique of the often unscientific and harmful techniques of contemporary, pharmaceutical-based psychiatry. Based on research, clinical theory, and years of practice, it can help children and their families rewrite their narratives for a happier life.

Suffer the Children: The Case against Labeling and Medicating and an Effective Alternative

Suffer the Children: The Case Against Labeling and Medicating

APA Reference
Stoeckel, M. (2016). Suffer the Children: The Case Against Labeling and Medicating. Psych Central. Retrieved on February 22, 2020, from https://psychcentralreviews.com/2016/suffer-the-children-the-case-against-labeling-and-medicating/