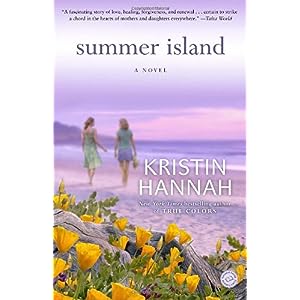 “It was the impurity in her heart that made her successful. She was an ordinary woman who’d made extraordinary mistakes. She understood every nuance of need and loss.”

Given my love for women’s fiction, I’m enthusiastic when I discover a new writer’s collection. Happily, best-selling author Kristin Hannah captured my interest immediately with Summer Island through her well-developed characters and compelling content.

Nora Bridge, a renowned radio talk show host living in Seattle is an advice–giver on family, relationships and other emotional matters. Her own experiences of heartbreak fuel her compassion toward others.

The novel centers on Nora’s strained relationship with her 27-year-old daughter, Ruby. Ruby is a struggling comedian in California who stopped smiling during her junior year of high school. She hasn’t spoken to her mother in nine years, ever since Nora left the family behind and relocated.

When Ruby is offered a large sum of money to write a ‘tell-all’ piece on her mother, and an opportunity to achieve celebrity status amid media hype regarding a scandal and the hypocrisy of her mother’s behavior, she decides to stay with Nora in her childhood home out on Summer Island.

Though Ruby initially has ulterior motives for rekindling communication with Nora, she begins to remember the past. As painful as those memories are, she starts to see her mom in a new light. She realizes that her mother didn’t abruptly leave the family for selfish desires; she was undergoing an internal battle of her own, even if at the time Ruby didn’t seem to notice. “My mother didn’t leave him – and us – for fame and fortune, but simply because she was human, and the man she loved had broken her heart,” Ruby realizes.

Summer Island raises the issue of family history: how much are we affected by our parents’ choices, even into adulthood? Nora’s father was an alcoholic, and she tried to run away from home. Is it difficult to fathom why her marriage was in trouble before it really began? She never felt loved by her father. That void, along with living with an alcoholic, stayed with her in the years to come. Nora left her own family when she was in a fragile and undeniably unrecognizable state. “I’d wake up, lying on the kitchen floor, with huge chunks of my day gone. I don’t know if you can understand that kind of depression,” Nora told Ruby.

Ruby broke up with her first serious boyfriend, only to enter a five-year relationship with someone she wanted to love but didn’t. Her self-worth deteriorated after her mother left, which not only instilled a fear of love, but a hesitation to have faith in love as well.

“My women are often in the same small boat,” Hannah said in an interview for another of her books on readinggroupguide.com. “I often am drawn to the moments in their lives when all that forgetting comes to a head. The day we realize how much of ourselves we’ve lost and the subsequent journey of re-discovery. Usually, I begin a book knowing where the woman is on that journey and where she will end up, but often the road itself is a mystery I uncover on a day by day, word by word basis.”

Nora’s eldest daughter, Caroline, also was about to follow in her mother’s footsteps and leave her marriage. “I let the bad times overwhelm me, and I ran,” Nora said. “It wasn’t until I’d gone too far to turn back that I remembered how much I loved your father, and by then it was too late. For all these years, I’ve been left wondering, ‘What if?’” She stresses the importance of fighting for your commitment and fighting for your family, with the desire to work on what’s worth saving.

Through it all, the pages of Summer Island illustrate a pertinent growth process — one where you could learn from the mistakes of the past. Hannah will leave readers feeling satisfied and fulfilled.