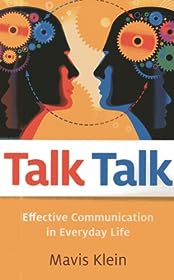 A friend in dire straits needs your advice, but when you offer help, she shoots down every suggestion. Exasperated, you tell her, “You’re not listening. You’re just wasting my time.” The call ends with her shouting, “I knew you weren’t my friend.”

What you may not know — your friend, too — is that you’re involved in a lose-lose game, explains author Mavis Klein. In her book Talk Talk: Effective Communication in Everyday Life, she shows how, baffling as it seems, this is one of our most common interactions. You offer advice, your friend counters, “Yes, but….”

Klein sheds light on this and other communication mysteries in her slim primer on Transactional Analysis (generally known as TA). To get acquainted with TA, it’s best to start with the appendix. There you’ll learn that TA was founded in the early 1960s by psychoanalyst Eric Berne. He identified three alter ego states: parent, adult, and child. These states, he posited, form all the content and quality of our interpersonal communications. Because humans thrive on “strokes” (defined as any recognized action between humans—verbal or nonverbal, positive or negative), what we receive earliest in life affects the way we perceive other people and their actions. For instance, Klein tells us, a person who has had a painful childhood may be “prompted to seek revenge on her parents by using others as ‘bastard’ substitutes for them.” Thus, she may seek opportunities to play the Yes, but… game, and you may end up either as a pawn or a willing participant looking for your own so-called strokes.

However, Klein yanks TA out from the mothballs and gives readers a good overview — particularly how these concepts pertain to communications. For the most part, TA is accessible to laypeople, so there’s no need to worry about grasping it, even if you don’t have a psychology degree. Plus, there’s a glossary in the back, and Klein’s diagrams go a long way to clarify her points. She starts off with the fundamentals, explaining “strokes” and how they’re a fundamental human need. People die without them, she writes. Of all strokes, intimacy is the most valued (the closest to being at the mother’s breast), and yet with it comes the highest level of vulnerability. Thus, many people shy away from intimacy and end up game-playing, which Klein says is “the source of the greatest number of highly valued strokes that most people seek and get, even though all games end with some kind of negative feeling.”

From here Klein ventures into the roots of most communication problems: the ego states. The parent, adult, and child egos are our sub-selves. We send and receive messages, constantly shifting between these states. Here’s where most problems arise. You come home and your husband has a cold. You suggest that he take some cold medicine and drink a glass of orange juice (an adult-to-adult transaction). He replies, “That’s not going to help. A cold just has to run its course” (a child-to-parent, stop-bossing-me-around response). His comment hurts, because you’re trying to show that you care. Klein tells us that these crossed transactions are “responsible for all the quarrels and all the wars that ever occur in the world.” It’s a big statement, but understanding how to create parallel conversations or to redirect or repair crossed communications can have huge effects. Lining up an interaction correctly can sell products, change politics, maybe even save the planet, if that’s possible.

The last section is more complex, as Klein digs deeper into various ego states and how they’re constantly shifting, such as when we make judgments (parent to adult) or collaborate (adult to child). All of her points are excellent, but compactly explained, and readers may find themselves in the swamp if their mind wanders even a second.

Unfortunately, this book’s strength is ironically its shortcoming. Klein has compressed a lot of ideas into this carefully distilled and very short TA handbook. However, it is so tight that it can feel dense and almost airless. Its bright cover and title give the impression that it’s a self-help guide, but it’s not. Klein does not spoon-feed information, nor does she give an abundance of examples. Readers are expected to fill in the gaps and draw conclusions.

Those who are willing to do the work, particularly those new to TA, will find this book enlightening. Immediately after finishing it, I began to listen to conversations around me differently, particularly my own. Why am I using this child voice around my husband? No wonder my friend is put off by what I’ve said. I’m using my parent voice.

Now that I’ve gotten a taste for TA, I’m placing an order for Berne’s Games People Play. I’m sorry I missed it the first time around.