Reviews Home » Relationships » Sexuality » Talk to Me First: Everything You Need to Know to Become Your Kids' "Go To Person" About Sex 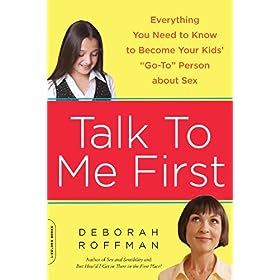 Talk to Me First: Everything You Need to Know to Become Your Kids' "Go To Person" About Sex

Sex has become so prevalent in America in recent years that not only is it casually accepted, it is commonplace.

With just a few clicks, any child can access an unending world of pornography on his or her computer; children “sext” with one another; commercials for “male enhancement” pills are shown between segments on ESPN’s SportsCenter — sex is everywhere. It’s not that this is necessarily bad. Rather, it’s only bad insofar as it is not put into the appropriate context for children.

To do that, parents must take active roles. In Talk to Me First: Everything You Need to Know to Become Your Kids’ “Go To Person” About Sex, Deborah Roffman advises just that.

The goal of her book, Roffman writes, is to provide “‘ways into the conversations you most want to have, about topics you hold dear, with kids of all ages.” There is no universal authority on sex. Every nation, every community, every family views the issue differently. The key is striking a balance where a rational, even-keeled dialogue can be opened up between parent and child. As most experts would agree, and Roffman makes abundantly clear, this is a task for the parent. She writes:

“[American culture] still can’t seem to decide if sex is the best thing in the world or the worst thing in the world; the most serious topic around or the most reliable fodder for joke-making from the playground to the late-night television screen; a holy sacrament or ‘no big deal;’ the highest form of human physical and emotional intimacy, or a ‘quickie’ between relative strangers. Our children truly are caught in the crossfire of all this confusion, struggling to make sense of these obsessive and polar opposite fixations. It’s parents more than anyone who can help find their way through the morass.”

Talk to Me First is divided into nine chapters, in which Roffman writes on many sex-related topics from a parent overcoming his or her unwillingness to engage their child in a healthy dialogue, to examining the impact of AIDS on sexual discourse, to cognitive development and acceptance of children as inherently sexual beings.

The book is written with authority, but it does not read like some scholarly article in a medical journal. First and foremost, Talk to Me First is a self-help book. It’s meant to provide empathy, advice, knowledge and reinforcement. And it’s written in such a way to impart its wisdom while keeping the reader – the parent – calm and rational.

Sex is a tricky subject. Roffman, the author of the well-received Sex and Sensibility, understands this. She writes: “For most of history, parents could reliably count on culture to reinforce the values and worldview they most wanted to pass on to their children. That was before mass media changed all of that, perhaps permanently.” The world that current parents grew up in is a thing of the past, most likely never to be resurrected again. The world has not gotten more liberal so to speak, but more modern. This fact, however, does not preclude the capacity for education.

Where Roffman excels most is not merely in her approach, but also with her thoroughness. She offers a broad, yet detailed, view of all things sex. She doesn’t boil ideas down to their plainest or simplest terms. Instead, she paints a portrait of larger issues before zeroing in with intricate details and practical information.

The primary point that Roffman makes is that not only are children sexual beings, but they are adults, or at least soon-to-be adults. When broaching a subject as sensitive as sex with them, there must be an inherent level of respect. Condescension is the enemy. Roffman writes:

“Through it all, we can also help by clarifying ‘adulthood’ in realistic and honest terms. Too often, in the eyes of teenagers and in society’s depiction, an adult is someone who does ‘adult’ things—driving, drinking, spending money, having sexual experiences. We can help them see that being an adult involves how we do things, not what we do. They will inevitably make some very good decisions and some very bad ones, and we may never know about them either way. But if we keep encouraging them to stay connected to us as anticipatory guides, we’ll maximize their chances — and research confirms this —that they’ll put off making major decisions, the ones that can most affect their health and their future, until they’re secure and mature enough to make the right ones.”

Talk to Me First unquestionably succeeds. Roffman understands her subject better than most, and that knowledge is evident in the book. Her empathy and relatability should be commended. Her book should certainly be read by any parent looking to help and connect with their child.

Talk to Me First: Everything You Need to Know to Become Your Kids’ “Go To Person” About Sex

Talk to Me First: Everything You Need to Know to Become Your Kids' "Go To Person" About Sex

APA Reference
Berkowitz, D. (2016). Talk to Me First: Everything You Need to Know to Become Your Kids' "Go To Person" About Sex. Psych Central. Retrieved on August 7, 2020, from https://psychcentralreviews.com/2016/talk-to-me-first-everything-you-need-to-know-to-become-your-kids-go-to-person-about-sex/