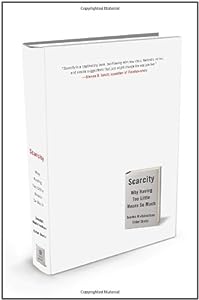 The Abundant Problems of Scarcity

What do you not have enough of? Money? Time? Friends? The lack may cause you greater problems than the obvious tight budget, frazzled days, or loneliness.

Harvard economics professor Sendhil Mullainathan and Princeton psychology professor Eldar Shafir outline a compelling theory about that in their new book Scarcity: Why Having Too Little Means So Much.

Drawing on research derived for other purposes as well as some of their own, Mullainathan and Shafir make a strong argument for scarcity begetting scarcity, among other obstacles to success and happiness.

The authors’ arguments for the self-regenerating problems of poverty are strong, but their theory applies more broadly as well. According to the authors, “The Scarcity Mind-set” — the state of living with scarcity — has one helpful effect and a whole lot of unhelpful ones.

For many people, nothing provides laser focus like an impending deadline. Getting started on anything that has no deadline requires monumental discipline. When I have lots of time to get a job done I can always find time for a few (thousand) games of Candy Crush Saga. But when that deadline is close and time is scarce, it’s easy to knuckle down and get ‘er done.

The other side of focus is what the authors call “tunneling,” like tunnel vision. When time is scarce, you become so focused on the task at hand, you tend to forget other important things. Having a tight deadline on a big job makes you completely forget another deadline. So you end up with two jobs making you frantic simultaneously, causing even greater scarcity of time. You are so focused on scraping together money for rent, you overlook your credit card due date and get slapped with a penalty, taxing your already taxed finances.

Scarcity can breed scarcity, hence the success of payday loan businesses, where people turn to pay a pressing bill without considering the size of the bill to come if they don’t pay the loan back, pronto.

The authors also find that scarcity takes up a huge amount of brain “bandwidth.” When something you need is scarce, it’s hard to keep it off your mind. The perpetual buzz of worry about not enough money, not enough time, even about resisting fattening foods (scarcity of calories) can cause you to underperform, make errors, lose your temper.

“Scarcity in one walk of life means we have less attention, less mind, in the rest of life,” they write. “Bandwidth measures our computational capacity, our ability to pay attention, to make good decisions, to stick with our plans, and to resist temptations. Bandwidth correlates with everything from intelligence and SAT performance to impulse control and success on diets.”

It’s a bold claim, the authors concede, and then they make excellent arguments to support it. For example, in one study, people who took personality tests and were then led to believe that they would be lonely (scarcity of friends) didn’t do as well on an intelligence test, and when offered chocolate chip cookies, they ate twice as many as people who were led to believe they were socially well adjusted. (Who among us has never spent a lonely evening on the couch with a pint of ice cream?) The authors even use their scarcity theory to explain the slight whiff of desperation that we might put out when we are lonely and trying to make a new friend.

And the authors address the need for “slack” — how having just enough is not enough, since all it takes is one little setback to put you behind. This is easy enough to understand when it comes to money (unexpected car repair or illness wreaking havoc on a tight budget), but it also brings to mind the concept of the “emotional love tank” Gary Chapman describes in his book, The Five Love Languages. If you keep an intimate partner’s emotional love tank barely full, you’ll get cut a lot less slack if the relationship takes a turn for the not-so-good. You need enough fuel in the tank to blast past problems.

The authors’ theory about the self-perpetuating problem of poverty is beautifully explained, highly credible, and important. But their ideas about scarcity in this readable and thought-provoking book are also applicable to whatever it is we don’t have enough of.

The Abundant Problems of Scarcity