Reviews Home » Disorders » ADHD » The ADD Myth: How to Cultivate the Unique Gifts of Intense Personalities 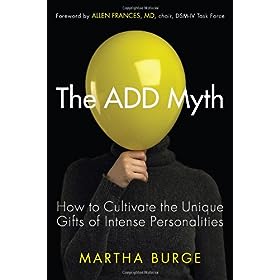 The ADD Myth: How to Cultivate the Unique Gifts of Intense Personalities

A few hours after I finished reading The ADD Myth, while pondering something that had occurred during the day, it suddenly hit me with great clarity what author Martha Burge was describing when she said that “truth is defined by your map.”  Now if that statement has piqued your interest enough to question what it could possibly mean, just sit back, relax, and dig in.

Burge, who has a B.A. in Psychology and an M.A. in Organizational Development, is also an ADHD coach and mother to two sons diagnosed with ADHD.  It is not unreasonable to assume that The ADD Myth is the product of both her professional and educational backgrounds as well as a quest for knowledge in support of her sons.

As a result, you are going to be exposed to a unique way of looking at a condition that has been diagnosed at an alarmingly increasing rate since its definition was changed in the DSM-IV to allow for inattentiveness without the hyperactivity or impulsivity.  ADHD, the name by which ADD is now known, may not be something that requires a diagnosis at all.

It may instead only require a willingness and daring to look at it as purely a personality trait whose name is intensity rather than a disorder called ADHD.  Shaping this new view is a blending and extrapolation of two concepts in particular; the work of Dr. Kazimierz Dabrowski (positive disintegration) and Dr. Candace Pert (neuropeptides).

Dabrowski’s five areas of “super-stimulatibility” are reinterpreted in The ADD Myth as “intensity.”  Burge’s take on them – sensual, psychomotor, intellectual, creative (Dabrowski’s was imaginational), and emotional – results in the acronym SPICE, supporting her belief that “intensities are the spice of life.”  Throughout the book, 16 meditative-type practices are presented to develop these intensities so they are manageable.  If “instead of the intense person having a deficit, they have a brain that intensifies stimuli,” these practices would seem to help dial down the intensity of those stimuli when mastered.

Dr. Candace Pert’s discovery of particular molecules (neuropeptides) in the body that were thought only to be present in the brain resulted in her conclusion that our bodies also have an “emotional brain,” and it is the unconscious mind.  Using that premise, the author infers that sensory input makes its way into the subconscious mind which then acts as a “gatekeeper” to the conscious mind.  It is at this gate that information is evaluated and then allowed to continue on its path to consciousness (the brain) or stopped dead in its tracks.  Whether or not it gets past the gatekeeper depends on if the information is determined to be one of three things:  dangerous, important, or something that the conscious mind has said to be on the lookout for.

Regardless if there is a diagnosis of ADHD or not, it would seem that an “internal map of reality” can be a very telling way to look at how we all navigate everyday life and its myriad interactions.  Remember “truth is defined by your map”?  Containing your “beliefs, opinions, values, attitudes, and many other forms of understanding the meaning of what you encounter in the real reality,” it is not something we consciously create, but is “given to us primarily by our family, culture, and early experiences.”

In intense persons, the author likens this map to the Internet in that thought is nonlinear, and intuition is utilized when analyzing incoming information.  In those who are non-intense, the internal map is simply a highway system, “with roads leading to other roads.”  That analogy would seem to speak volumes of the challenges an intense person faces.  The search returns millions of hits for every piece of information presented to them and then they are tasked with having to sift through them all to select the one that best serves the purpose at hand.  Intense?  You bet.  ADHD?  Maybe not.

Perhaps the best reason for the theory of intensity is with regard to children and the way in which they learn.

“Schools are designed to teach the non-intense type of brain, the linear thinking style.  They use practice and repetition to create the pathways in order to store the information.  The non-intense child is well adapted to this approach for learning.  The intense child is only frustrated by it.  When a math teacher insists on seeing the ‘work’ behind the answer to a question, he is looking for evidence that the child has built and traveled the correct roads in order to store the information.  For the intense child, the road is not nearly as concrete.  They may intuitively know answers and not be able to ‘show’ their work because there wasn’t any.”

The ADD Myth is written in an easy-to-read style that conveys the author’s conviction that intensity is more descriptive and helpful than a diagnosis that requires medication to control.  She offers a way to put that control back into the hands of the one whose life it is that is being affected.  In that regard, it would seem that a prescription for partnership rather than medication is in order.  As Burge states, “For ADHD professionals, know that intense people are becoming self-aware.”

The ADD Myth: How to Cultivate the Unique Gifts of Intense Personalities

APA Reference
Klein, T. (2016). The ADD Myth: How to Cultivate the Unique Gifts of Intense Personalities. Psych Central. Retrieved on April 5, 2020, from https://psychcentralreviews.com/2016/the-add-myth-how-to-cultivate-the-unique-gifts-of-intense-personalities/