Reviews Home » The Art of Confession: Renewing Yourself Through the Practice of Honesty 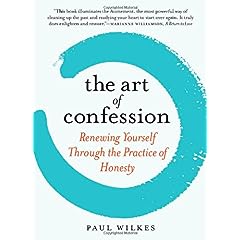 The Art of Confession: Renewing Yourself Through the Practice of Honesty

We live in an age of frequent and easy confession. People seem eager to share private information and experiences that would have been kept as closely guarded secrets in years past, perhaps guarded by shame and humiliation.

From talk shows and reality programming on television, to personal blogs on the Internet, we are flooded with people’s confessions and secrets. The politician’s confession has become so commonplace that we know the script and are only surprised when it is violated — when “the wronged wife” chooses not to attend the media event, for instance.

At the same time, the traditional context for confession, religion, is experiencing a decline in participation. What do we even mean by confession these days?

In The Art of Confession, Paul Wilkes explores the roots and branches of confession, which he conceives as an attitude more than a specific action – confession with a little c, he says. He begins the book by stating his core assumption that “deep within every human heart, there is a desire to be good.” As human beings, of course, we falter, we make inelegant choices, we betray ourselves and others, and we know it. In this context, Wilkes enlists a “Confessional Chorus” – a rabbi, a priest, a psychiatrist, and a Roman Catholic nun – to contribute sidebar commentary on the issues he explores in this small but powerful book.

The first third of the book orients the reader to the history of confession. It’s a brief but fascinating history. Starting in ancient Egypt, it travels through Native Americans; Buddha; New Guinea; Judaism; Catholicism; the Protestant Reformation; and therapy — today’s commonplace confessional context.

Confession has been secularized and in the process, as philosopher Paul Ricoeur said, “man has lost the sense of forgiveness while retaining his sense of sin.” And in the words of Swiss physician Paul Tournier, “Nothing makes us so lonely as our secrets.”

In the remaining chapters, Wilkes leads the reader forward to an understanding of confession as an attitude of realignment, to a way of minding our inner compass. Chapter Five is particularly helpful, and quite moving. It presents and describes seven very specific approaches to reflection and realignment, including:

There are times we know we need to confess to another person. That private reflection is not the final step. In Chapter Six, Wilkes addresses this topic, exploring how, what, to whom, where, and when not to confess. Finally, in Chapter Seven, Wilkes briefly explores the next step, shaping a new way of living, which he summarizes as “doing the next right thing.”

This small book – at a trim size of 7” x 5” – reminds me of a prayer book, one I would leave on my nightstand for dipping into before sleep, one I might carry with me in my bag. The tone throughout is compassionate and real, so the reader feels welcomed and understood. Wilkes and his Confessional Chorus do not write from on high, from a position of holy judgment, but rather from the human perspective of thoughtful people who aspire to goodness and who, like us as readers, regularly miss the mark. Although the book is itself beautiful, I flagged sections, starred passages, underlined sentences, and folded pages so I could find them quickly. This is not a book I simply read and placed on the shelf; it’s a book that means to be used, that intends to place its fingers into your life, to guide you in the kindest way toward who you want to be. Although much of the history it presents and the guidance it offers is in the realm of religion, you needn’t be religious to find it useful. It takes a universal approach to the material, making room for everyone. The closing sentences make the point: It isn’t about reuniting you with a specific religious belief, it’s a wish “that you might be reunited with yourself.”

Because the book is small, and brief, I was left wishing for a bit more, especially in the final chapter about moving beyond these specific practices. That chapter felt light, even for a small book. However, the book takes an internal focus – me, inside myself – so perhaps it’s up to me to figure out those next steps for myself, anyway. This lovely little book has stayed with me in the weeks since I read it, and some of the exercises have stuck with me, if not as nightly practice at least as a regular part of my inner life. It is a welcome antidote to the excesses of our public confessional culture.

The Art of Confession: Renewing Yourself through the Practice of Honesty

The Art of Confession: Renewing Yourself Through the Practice of Honesty

APA Reference
Handelman, L. (2016). The Art of Confession: Renewing Yourself Through the Practice of Honesty. Psych Central. Retrieved on September 22, 2020, from https://psychcentralreviews.com/2016/the-art-of-confession-renewing-yourself-through-the-practice-of-honesty/