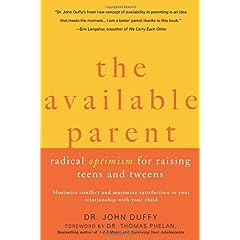 The Available Parent: Radical Optimism for Raising Teens and Tweens

As the parent of a teen, you might feel exactly like this mother: “My daughter went to high school her first day as a freshman and never returned. I lost my baby!”

But you might be surprised to learn that it isn’t that you lost your teen. In fact, it might have more to do with your behavior than you think.

“We parents often strike first,” writes psychologist and life coach John Duffy, Psy.D, in his book The Available Parent: Radical Optimism for Raising Teens and Tweens. Duffy specializes in working with teens. Based on his clinical work, Duffy believes that it isn’t teens that are unavailable but largely it’s their parents. “We strike with judgment, fear, anger and ego. Far, far too often, parents are unavailable, and their children simply react in kind.”

In his book, Duffy helps parents learn how to become available caregivers, which he sees as the key to parenting teens. Being available, according to Duffy, means acknowledging and accepting your teen as they are right now, and challenging them. It also means creating an environment of open communication and recognizing and reinforcing positive behaviors. As a parent, it’s important to show your teen that you see them as being good enough, because if they believe that you don’t think this way, “they’ll throw in the towel on your relationship” — and possibly themselves.

In general, what distinguishes this book from others is that it focuses on the parent’s role; on your own behavior, which as Duffy says, you have full control over.

Duffy divides The Available Parent into three parts: “your teenager’s wild world” outlines the struggles teens face today; “what never works” features ineffective parenting techniques such as lectures, vicarious living, blinders and bribery; and “what always works” features effective strategies for connecting, communicating, setting clear consequences and more. At the core, this book is about developing and cultivating a close and positive relationship with your tween or teen.

Throughout the book, Duffy shares stories about his clients and his own childhood experiences along with activities parents can try. Both are inspiring and helpful. In one activity, Duffy suggests turning to your teen for advice when you’re struggling with a certain situation: “What would she do in the same situation?” According to Duffy:

Several things may happen. For one, your teenager will feel respected for her point of view. Second, you’ve got her problem-solving, and it’s not even about her behavior, or anything she’s done wrong! On top of that, you will have identified another method of connecting with her. Finally, I would not be at all surprised to hear that you found a solution to your dilemma that you might never have thought of.

Such exercises are valuable starting points but the book could’ve benefited from more detailed techniques. Also, while Duffy cites some research, it would’ve been interesting and helpful to learn about studies on teens and what research has shown works and doesn’t work in healthy parent-child relationships. (On a similar note, readers should be aware that Duffy doesn’t cover severe problems.)

Strengths of the book also include Duffy’s easy-to-read, conversational style and even calming nature. Raising tweens and teens can be anxiety-provoking, no doubt about it, but Duffy does a great job in allaying parents’ fears.

He also underscores the importance of savoring the relationship with your teen and raising independent and resilient young adults. But while he encourages parents to allow teens to come to their own decisions, he advocates discipline in the form of clear-cut consequences.

In fact, he believes that teens need structure. (“Those parameters provide a template for boundaries he will use throughout his life.”) Punishment, however, is something that’s best used minimally because it cuts off communication and sparks anger-filled arguments, on both sides. To set precise consequences, Duffy suggests creating a year-long written behavioral contract that lists the behaviors and consequences for breaking the rules. The teen participates in generating the contract, and everyone signs it.

The Available Parent is a valuable and thought-provoking resource that’s filled with many precious lessons and gives parents a unique perspective on cultivating a healthy relationship with their kids.

The Available Parent: Radical Optimism for Raising Teens and Tweens