Reviews Home » The Birth of Intersubjectivity: Psychodynamics, Neurobiology & the Self 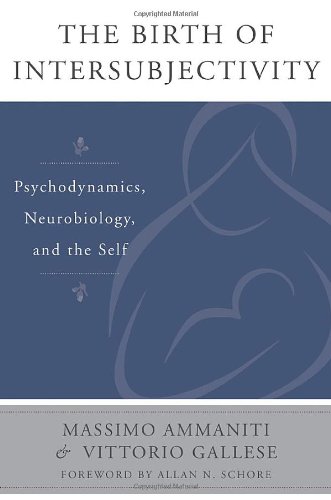 The Birth of Intersubjectivity: Psychodynamics, Neurobiology & the Self

“The moment a child is born, a mother is also born. She never existed before. The woman existed, but the mother, never. A mother is something absolutely new.”

To be human is to engage in relationships with other humans, and, by these interactions, to be transformed. In The Birth of Intersubjectivity: Psychodynamics, Neurobiology, and the Self, Massimo Ammaniti and Vittorio Gallese, both high-profile researchers, offer a tour de force overview of the current understanding of intersubjectivity: how an individual relates to and understands another.

The scope is ambitious. Drawing on Ammaniti’s expertise in psychoanalysis and Gallese’s in cognitive neuroscience, the book takes a broad yet detailed approach to intersubjectivity, from the level of the neurotransmitter and neuron to the theoretical framework of Freud and others. While it is a scholarly work that will appeal to those already well-versed in the field, it lacks the readability to make the subject matter approachable for a wider audience.

The book begins with a summary of our understanding of the interaction between self and other using an interdisciplinary approach influenced by psychoanalysis, philosophy, developmental psychology, and cognitive neuroscience. How, though, does intersubjectivity develop, this defining of self in part by relation to the other?

The authors begin to answer these questions through the role of maternal care, starting with its evolutionary development. They note that, “During pregnancy, deep transformations occur in the maternal body with hormonal and neurobiological changes on one hand, and the maternal psychic world and the identity on the other, with the activation of mental representations of self as mother and of the baby.” They combine a review of the literature and a series of interviews with expectant mothers to illustrate different patterns of maternal development.

Those who have been pregnant or been around pregnant women will be able to relate to the authors’ note on the “deep changes [that] are characteristic during pregnancy, with emotional upheaval and rapid identity oscillations.” The book argues that “at the same time women experience a growing sense of internal coherence, satisfaction, and personal integration” that is predictive of later psychological maturation throughout pregnancy and early parenthood.

While in the past much emphasis has been placed on the role of the mother, Ammaniti and Gallese include coparenting and the important role of the father during pregnancy and the postnatal period. To do this, they pull in both systems theory and psychoanalytic approaches to explore the dynamics of these developing relationships. They then return to a neurobiological vantage point with a discussion of the changes that occur during pregnancy and the postnatal period in maternal neurocircuitry to promote care of and bonding with the baby.

Finally, the focus shifts to the child itself. The authors review work on both prenatal and infant periods that demonstrates “building of the primary matrix of intersubjectivity” through “the human capacity of orienting toward faces and eye-to-eye contact” along with mutual regulation between caregiver and infant.

This capacity to relate to the other may even be present early in utero, they write: Ultrasounds of twins reveal social actions, such as reaching out and touching, between the fetuses.

It is through this lens that the authors then explore the role of stressors on child development. Given the previous chapters’ demonstration of how finely tuned humans are, even prior to birth, to social interactions, it is not surprising that negative interactions can have a detrimental effect. The authors discuss how stress influences development, calling on decades of work to demonstrate its deleterious effects on intersubjective development.

This, in turn, speaks to the importance of the use of early intervention for at-risk households. The book concludes with a moving quote from John Bowlby, a psychiatrist and pioneer of attachment theory, who noted, “Just as children are absolutely dependent on their parents for sustenance, so in all but the most primitive communities, are parents, especially their mothers, dependent on the greater society for economic provision. If a community values its children it must cherish their parents.”

Ammaniti and Gallese are clearly well-versed in intersubjectivity. The dust jacket lauds their work as a “masterful collaboration” that has produced the “most sophisticated, comprehensive, and ambitious book on the subject.” However, somewhere, amidst the masterful, scholarly ambition, readability was lost. Much of the book reads like a very lengthy review article, heavily cited and littered with abbreviations and technical terms.

The challenge of the book is the breadth of research and theoretical models discussed. Readers with extensive expertise in both neurobiology and psychodynamics may find this a thoughtful discussion of the overlap between the two. For those with only a basic understanding and a curiosity to know more, this may not be the place to start.

The Birth of Intersubjectivity: Psychodynamics, Neurobiology, and the Self

The Birth of Intersubjectivity: Psychodynamics, Neurobiology & the Self