Reviews Home » The Book That Started It All: The Original Working Manuscript of Alcoholics Anonymous 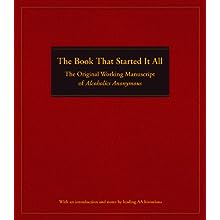 Chances are you can ask almost anyone if they know what the Big Book is and you will get a response along the lines of “Yes, that’s the bible for alcoholics, right?”  According to Bill Wilson, one of the cofounders of AA, the reference to it being a bible caused him to “shudder because the guys who put it together weren’t a damn bit biblical.”  Wilson, who wrote Alcoholics Anonymous – and which is more commonly known as the Big Book – was named one of Time magazine’s “100 Persons of the Century” in 1999, and referred to by Aldous Huxley as “the greatest social architect of the twentieth century.”

First printed in April 1939, Alcoholics Anonymous set forth a program of recovery for those who were ready to acknowledge their addiction to alcohol and wanted help in their struggle to overcome it.  On June 21, 2007, the original working draft of the manuscript went up for auction at Sotheby’s in New York.  It was purchased by its current owner for a winning bid of $850,000.  Now, three years later, a high-quality scan of each page of that original manuscript is being presented to the public in The Book That Started It All.  The publisher, Hazelden, is a national nonprofit organization whose books “support and strengthen lifelong recovery.”

Before getting to the manuscript itself, you are presented first with an introduction of sorts that provides a “Historical Context and Suggested Framework for Reading the Working Manuscript.”  While reading and keeping in mind the social landscape of the Great Depression and Prohibition, the time period during which Alcoholics Anonymous was written, the manuscript becomes a living, breathing work in progress with the handwritten accepted and rejected changes, and thoughts written in the margins and on blank pages.

While many of the changes are grammatical in nature, it was apparent throughout the chapters explaining what AA is that a concerted effort was being made to ensure the reader did not feel preached to and its writers did not come across as holier than thou.  For example, in a reference to “most alcoholics” the decision was made to add “of us,” making it then read “most of us alcoholics.”  Where necessary, the language was changed to be inclusionary rather than seeming to point a finger at those they were trying to reach.  Clearly, they knew that by letting the reader know that they were also in the reader’s shoes at one time that perhaps the program they were presenting would not seem such a bitter pill to swallow.  It was tried and true.  They seemed to be experiencing further introspection now that their sobriety had been achieved and this book was being finalized in order to impart that life-saving gift to others.

In contrast, the personal stories contributed by the early AA members comprising the non-“instructional” portion of the book remain generally untouched and free from editing.  Interestingly, there was only one person’s story that was completely eliminated before the book was published.  Its author – whose name is handwritten in the margin – “thought the book was racket and so withdrew this” and each of that particular story’s four pages was then marked with a large X.  One has to wonder if they would have chosen to include that person’s name back then if they had had any idea that over 70 years later it would be made public in this form.  It was, after all, alcoholics anonymous.

The Book That Started It All also gives readers a detailed “Thematic Listing of Edits with Annotations,” a history of the publication of the Big Book throughout the years, and a lengthy speech Bill Wilson gave at a 1954 AA convention about how the book came to be written.  As was the case when the original manuscript was written, the writers and contributors of the non-manuscript portions of The Book That Started It All are currently members of AA as well.  They have, however, elected to remain anonymous as those whose personal stories were shared in the manuscript also chose to do.

Due to the large role the Big Book plays in their lives, it is almost certain that the largest reader base for The Book That Started It All will be made up of AA members.  One can envision meetings during which the manuscript’s changes are picked apart and debated at length.  What is uncertain, however, is whether there are readers from other walks of life with sufficient interest to explore its pages.  It is possible that health care professionals, counselors, and clergy, curious about the book’s role in the treatment of addiction, could make up a secondary audience of readers.

Rarely does a reader get the chance to see a book in its infancy much less the fine-tuning of its content during the ensuing editing process.  Although it is not a book that is effortless to read due to the handwritten changes and notes, The Book That Started It All provides a unique opportunity to study the thoughts and convictions of those whose collective review process resulted in the Big Book, Alcoholics Anonymous.

APA Reference
Klein, T. (2016). The Book That Started It All: The Original Working Manuscript of Alcoholics Anonymous. Psych Central. Retrieved on December 5, 2020, from https://psychcentralreviews.com/2016/the-book-that-started-it-all-the-original-working-manuscript-of-alcoholics-anonymous/