Reviews Home » The Boy on the Lake 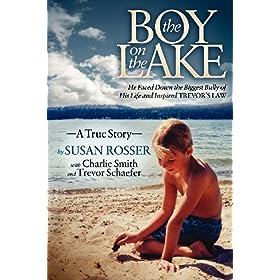 The Boy on the Lake

Trevor was a preteen growing up in the breathtaking landscape of McCall, Idaho — a carefree kid who enjoyed being active and swimming in the local lake. When he became plagued with sharp, debilitating headaches, Trevor’s doctor diagnosed him with a sinus infection and sent him on his way. Trevor and his mother, Charlie, however, knew that there was something seriously wrong. The headaches increased in intensity, and finally Trevor’s brain tumor was discovered.

The Boy On The Lake: He Faced Down the Biggest Bully of His Life and Inspired Trevor’s Law tells the true story of Trevor Smith Schaefer, his fight to survive cancer, and his determination to find answers concerning the much higher than average rate of childhood cancer around the town of McCall. Penned by writer Susan Rosser with help from Trevor and his mother, Charlie Smith, the book chronicles the the pair’s battles with disease, with an emotionally abusive father and husband, and, finally, with the government’s lack of attention to environment problems.

When her twelve-year-old son’s malignant medullablastoma was discovered, Charlie Smith was trying to deal with a divorce. During Trevor’s surgery and chemotherapy, the author tells us, Charlie felt she practically lived in the hospital’s cancer unit. As she got to know the other mothers and cancer patients, she developed a sinking feeling that something wasn’t quite right in her town. She began her search to find out why so many children in the area were suffering from cancer. Through extensive research, good friends, nerves of steel, and the drive and optimism to keep going, Charlie came across shocking information about McCall and the surrounding area. The beautiful place she called home was actually a chemical cocktail, and the government seemed less than willing to help.

Along with the cancer, Trevor had to fight off a bully who should have been his most steady support through the whole ordeal: his own father. Ballard Smith was there for his son only when it was convenient, and often stood him up as he suffered through the effects of chemotherapy. Ballard’s lack of emotional support eventually led to emotional abuse, in the form of ridicule for walking funny (an effect of the chemo). Charlie and Trevor were finally able to escape from Ballard’s emotional abuse and control issues to team up for their next obstacle.

Once Trevor had beaten cancer, he and his mother embarked on a mission to raise awareness of the chemicals that infest many towns, with the goal of making the government do something about them. Through years of research, networking with the right people, and the unwavering courage to face down the people who attempted to belittle their quest, Charlie and Trevor were able to make extensive progress in discovering the secrets their town held. The calls began pouring in from all over the country from those suffering in towns like McCall, and Trevor’s Law was born.

The law, if passed, would direct federal funds to areas where the cancer level is particularly high among children so that testing can be done to find possible environmental influences. To help create the law, Trevor and Charlie worked to gain the backing of politicians in Idaho, including numerous state senators. They also worked with parents of children with cancer, people in other cancer clusters across the country, and even the famous Erin Brockovich. Their message gained momentum, eventually leading Trevor to Washington, D.C., to encourage lawmakers to support Trevor’s Law. While there, he pleaded with Congress to see that more effort needs to be made to figure out what’s going on in areas with high childhood cancer rates.

It must have taken Trevor and Charlie tremendous amounts of optimism and courage to not only get through cancer but then campaign to help others with similar problems. Trevor faced the prospect of death before he had the chance to become an adult, yet managed to turn his experience into something positive — something that still may affect the entire country. Charlie, meanwhile, helped the cause even at a time when her family life was falling apart. This perseverance, shown by both mother and son, makes “The Boy on the Lake” an inspiring read.

The Boy On The Lake: He Faced Down the Biggest Bully of His Life and Inspired Trevor’s Law

The Boy on the Lake