Reviews Home » Disorders » OCD » The Boy Who Finally Stopped Washing: OCD From Both Sides of the Couch 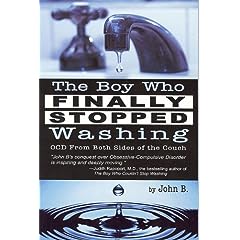 The Boy Who Finally Stopped Washing: OCD From Both Sides of the Couch

John B. is a therapist who both suffers from and treats OCD.  In this memoir, he describes what it’s like to live with OCD, and, in general terms, the treatments that helped him and his clients.  Unfortunately, although the book contains some vivid descriptions of John B.’s OCD along with some information on suggested treatment, it is so poorly written and edited that the value of these insights is lessened.   For example, at one point, the author states, “the little amount of alcohol I had probably didn’t help my depression.  In deed [sic], alcohol is an anti-depressant.”  Does he really believe that alcohol is an anti-depressant?  A good editor would have caught such a blatant error.

The most useful information lies in his descriptions of obsessive thinking; his writing about the stigma of mental illness; and some of his insights into treatment.  In one chapter, he describes the feeling of being a guinea pig as doctors try him on new medications.  The book includes chapters written by his wife and parents which describe how John B.’s OCD has affected them.  He also has advice for families about how to handle it when a family member has OCD.  He states that families “need to permit the sufferer to experience anxiety and discomfort when facing OCD” instead of “giving in to OCD.”

In his descriptions of obsessive thinking without compulsion, John B. vividly depicts how an obsession can take hold of him and last for years.  To counteract the obsession, he describes the necessity of “inducing anxiety for a reason.  Your goal is to become desensitized (or habituated), or [to] get used to the anxiety you feel about a particular event or stimulus.” After you induce the anxiety, you then learn how to “manage and tolerate” it.

In an odd and annoying quirk, John B. personifies OCD throughout the memoir, making it seem like a living foe.  Thus he writes, “This chapter will examine the births of both of my children and how my OCD and I reacted to them.”  In talking about his sense of over-responsibility for others, he says, “My OCD wanted, no, it needed for me to feel more in control of certain volatile situations.”

John B. regularly treats clients in their homes.  He describes one incident where he was 30 minutes late to a session and the client was hanging out with friends at his home.   He says,

“Suddenly, surprisingly, two of my client’s friends came walking into the living room with my client while I was talking to the mother.  She was reporting how poorly her son had done the previous week.  I maintain confidentiality while talking to my clients and their parents.  I felt awkward and anxious speaking in front of his friends.”

He rationalizes the incident this way:

“My anxiety and discomfort was appropriate and adaptive in this case, because his mother and his friends were invading the space between my client and me, his therapist.”

Instead of discussing how he might make changes to avoid violating professional standards regarding privacy and confidentiality (e.g., treat the client in his office from then on), John B. brought up the issue only to show us how he handled his anxiety.

Since I have suffered from OCD since childhood and I’m the parent of a son with OCD, I found myself disagreeing with John B.’s adamant assertion that only cognitive behavioral therapy in combination with an SSRI prescription works to treat OCD.  While studies show that it is the most effective treatment, he says that “any other ‘treatment’ will result in self-sabotage.”  I also disagreed when he stated that families are enabling the illness if they do anything to reduce the anxiety caused by obsessive thoughts. While it would be ideal to obtain treatment from a qualified professional, when my son developed OCD at the age of 8, we could not afford treatment.  I chose to reduce his anxiety to a manageable level by arranging the house so he could avoid physical contact with his brother’s friends.  From my insights as a fellow sufferer, we worked on his OCD together, and today he is a relatively happy teenager who is largely symptom-free.

The title is misleading.  For one thing, it implies that John B. has been cured of OCD.  Although he has learned to manage his OCD, he is not cured.  Also, as the author states in the preface, “Even though the title suggests that I used to wash my hands frequently, I have never had a handwashing compulsion.”  He used the title because it refers to the earlier book, The Boy Who Couldn’t Stop Washing by Judith Rapoport, M.D., which includes information about John B.’s case.  If I’d purchased the book because I was specifically interested in a handwashing compulsion, I would have been disappointed by this admission.  However, in this case, it gives the potential reader a useful insight into the book. While the book contains information that is honest and valuable, much of that information will be obscured by poor organization and writing, just as the true nature of the book is obscured by the inaccurate title.

The Boy Who Finally Stopped Washing: OCD from Both Sides of the Couch

The Boy Who Finally Stopped Washing: OCD From Both Sides of the Couch

APA Reference
Crook, J. (2016). The Boy Who Finally Stopped Washing: OCD From Both Sides of the Couch. Psych Central. Retrieved on November 26, 2020, from https://psychcentralreviews.com/2016/the-boy-who-finally-stopped-washing-ocd-from-both-sides-of-the-couch/