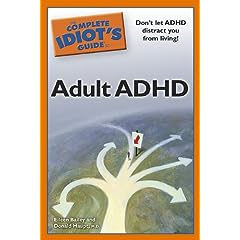 The Complete Idiot’s Guide to Adult ADHD by Eileen Bailey and Donald Haupt, M.D., was a total pleasure to read. I was amazed by how much I learned in reading this book, which is full of surprises and new information.

Of the many books about ADHD I’ve read to date, The Complete Idiot’s Guide to Adult ADHD is at the top of the list as a great overview for beginners, and a good refresher and supplementary resource for those of us who are already knowledgeable about adult ADHD.

It’s highly readable, and uses both neutral and positive language. As an adult with ADHD, I appreciate this. I’ve read many other books intended for the lay person regarding adult ADHD, and some used intimidating scientific jargon. Some had an excess of scary photos of brain cross-sections, which were incomprehensible to the non-neuroscientists among us. In comparison, this book was direct, written in plain language, service-oriented, and encouraging.

I was impressed by how comprehensive it was, in terms of topics covered and extra tidbits of related information. While it would have been impossible to delve completely into any one topic, as mentioned, this book is a great starting point for anyone beginning to learn about adult ADHD. If the reader wishes to explore a topic more fully, a Resources section at the back of the book provides, among other things, a list of helpful magazines, books, online resources and ADHD communities.

One is instantly struck by the sensitivity and thoughtfulness of authors Eileen Bailey (a lead writer for ADHD Central), and Donald Haupt, M.D., (a psychiatrist and adult ADHDer). These authors immediately gained my trust when they addressed the dilemma caused by the Idiot’s Guide title and its potential impact on a sensitive adult ADHDer.

The book’s back cover blurb reads, “You’re no idiot, of course. But sometimes you – or someone you love – has trouble concentrating.” Kudos to the authors for recognizing that it might be difficult for some newly-diagnosed adult ADHDers to get past the title, and recognizing that by the time an adult is diagnosed, they’ve usually been called “stupid,” “idiot,” or some other derogatory term, once too often.

Besides the authors’ demonstrated insight and sensitivity, another distinguishing feature of The Complete Idiot’s Guide to Adult ADHD is that, unlike many books about adult ADHD, the anecdotal stories of ADHDers were kept to a minimum. This book stays true to its mandate and structure, making it easier to read, more accessible, and less anxiety-producing than might otherwise be the case had an overabundance of difficult case histories been paraded before the reader. In The Idiot’s Guide, these would only have distracted and possibly upset the reader (who, as previously noted, may very well be a newly-diagnosed ADHDer or someone contemplating a diagnosis).

The Idiot’s Guide authors wisely stuck to their mission, which appeared to be simply to present useful, up-to-date information that an adult ADHDer (or their loved ones and friends) could use to better comprehend ADHD and to move forward after diagnosis.

The book is divided into six parts, followed by Appendices. As mentioned, this book is remarkable in its breadth (but, by necessity, not in depth) and touches upon just about every area a newly diagnosed adult ADHDer would be curious about.

For the most part, I found the organization of the chapters logical. Part One gives an overview of adult ADHD, including a bit of its history; Part Two discusses treatments; Part Three delves into a variety of relationships, including a special chapter on communication; Part Four discusses ADHD at work; Part Five talks about ADHD in everyday life; and finally, Part Six outlines ADHD through different life stages, including college; ADHD in men versus women; ADHDers as parents; and ADHD in the elderly.

Organizationally, I was a bit jolted by the inclusion of a chapter on managing emotions and hypersensitivities in Part Five, alongside the very practical day-to-day details of time management, procrastination, budgets and clutter. I found the contrast between emotionally difficult material and more pragmatic matters a little jarring.

On a positive note, structurally, there are several elements to this book that make it particularly appealing to the ADHD reader’s sometimes short attention span. At the beginning of each section, a brief, one-page overview of what will be covered in that section is provided. Similarly, a summary of what is to come is found at the beginning of each chapter. Especially helpful is a short, point-form summary at the end of each chapter called “The Least You Need to Know.”  This point-form list includes the main points of each chapter, for quick and easy reference.

Some of the most surprising information is found in small sidebars called “The Lowdown” or “The Scoop.”  For example, in one “Lowdown” sidebar, I learned that there are some colleges in the U.S. that serve specifically ADHD students; in another, I learned that stimulant medication taken in the evening may help adults to sleep better, both new pieces of information to me.

In one sidebar called “The Scoop,” we’re told that American companies with fewer than 15 employees are excluded from the Americans with Disabilities Act, another valuable and interesting fact for adult ADHDers.

I found Part Three, ADHD and Relationships, particularly impressive. Written in nonjudgmental language (in comparison with some other books attempting to tackle ADHD and relationships), I found the information nonthreatening, pragmatic, and encouraging without being Pollyanna-ish. Rather than vilify ADHDers, the information explains the “whys” behind the sometimes less-than-endearing behavior of an adult ADHDer.

When one has spent a lifetime of taking blame (rightly or wrongly) for many situations, losing self-confidence and self-esteem in the process, it is encouraging to read a non-blaming explanation without the all-too-common moral or bad-character explanations that still permeate our culture.

While the authors could not fully explore the various relationships in ADHDers’ lives, they do touch briefly on the most important ones: marriage, family members, co-workers, and friendships. One example of a brief, but thought-provoking piece of wisdom occurs when the authors discuss whether an adult ADHDer should share their ADHD diagnosis with their family:

This hard-hitting, yet straightforward advice is a great example of the authors’ no-nonsense approach.

In yet another device used to deliver information, called “Think It Over,” the authors provide warnings about important areas of concern for ADHDers. In one such sidebar, we’re told that those who procrastinate have more health problems such as colds, flus, and stomach problems. While I appreciated the information, which, again, I had not heard elsewhere, I would personally prefer to see a brief accompanying reference or two to back it up. While I was pleased with the amount of new information in this book, I was also a bit frustrated with not knowing where it came from.

Another way in which the information was less helpful than it otherwise might have been, is that some material was only relevant in the U.S.. While I understand that the book’s target audience is mainly American, as a Canadian, I would have appreciated at least some Canadian equivalencies.

The U.S.-centric material included sections on finding medical professionals, reference to specific American legislation, and terms like HMO (Health Maintenance Organization; I’m still not sure what that is). In other places, terms like “Fragile X Syndrome” and PDA are not defined within the content or the Glossary, which I found frustrating.

In spite of these minor oversights, the book achieves its main goal – to provide a general, yet thorough, overview of adult ADHD – very well.

As previously mentioned, I found Part Three, ADHD and Relationships, particularly helpful. In a special chapter devoted entirely to communication, the authors provide an excellent example of how ADHDers and non-ADHDers differ in their perceptions of, and their managing of, the exact same incidents in a hypothetical day. The resulting lesson in individual perspective and perception is highly illuminating of the differences between the ADHD and non-ADHD mind.

Overall, my criticisms of this book pale in comparison to my overall assessment which is, in a word – fantastic. While not the most literary of tomes, it is also less clinical than many other books about adult ADHD: there are no scary brain scan images; no harsh or critical language; and we’re not regaled with pathetic case histories that leave us, as newly diagnosed adult ADHDers, crushed and despairing.

If you, or someone you love, has been newly diagnosed or is considering looking into a diagnosis for adult ADHD – this is the book for you. There are others out there that will expand on the information, but none that I know of that will give such a great overview along with a starting point for topics you might choose to delve into more fully. There is even an excellent “Five-Question Screening Test” in the very first chapter to help you to identify yourself as a possible adult ADHDer.

With appendices including common acronyms, a glossary (albeit not as comprehensive as I’d like), helpful resources, references and an index, you’ll finish reading this book with a solid foundation of what adult ADHD is, what it isn’t, and what you can do about it.