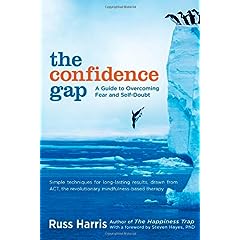 A shaky self-confidence or relentless self-doubt stops many people from pursuing their passions. A fear of failure gnaws at them, leaving them at a standstill and unsatisfied with their lives. If you know what I’m talking about — and so many of us do — Russ Harris’s book The Confidence Gap: A Guide to Overcoming Fear and Self-Doubt may help.

Harris is a physician and therapist who’s worked with many clients — thousands, he says — who hadn’t pursued their dreams because of little self-confidence and a whole lot of self-doubt. He’s also been there. For many years, Harris was drowning in insecurities and self-destruction. As an anxious young man terrified of failure and social situations, Harris used alcohol to cope with his crushing self-doubt. He drank his way through medical school, rarely had any meaningful relationships, and was even hospitalized for alcohol poisoning his third year. When it came to studying, his self-doubt was so powerful that he actually avoided it altogether and failed every exam his first two years of school.

As a junior doctor, his self-doubt and anxiety peaked — so much so that he developed red blisters on his fingers because his sweat-soaked hands would rub against his surgical gloves. Eventually, he got better and has been able to pursue his own passions, including writing books and regularly speaking to large audiences, with confidence.

The Confidence Gap is easy to read, encouraging and relatable. In addition to sharing his personal experiences, Harris features various anecdotes, including the stories of Nelson Mandela and Joe Simpson, climber and author of Touching the Void, along with a variety of techniques to help readers build up their confidence. These tools and tips are based in Acceptance and Commitment Therapy (ACT). Developed by psychologist Steven Hayes, ACT is a form of cognitive-behavioral therapy that was originally created to treat depression. But it’s been successfully adapted to many different fields.

One of the keys of ACT is mindfulness—a mental state of being fully aware and focused. Mindfulness helps people deal with self-defeating thoughts and painful emotions (such as anxiety and anger) and focus on fully engaging in life. Throughout the book, Harris provides readers with advice on cultivating mindfulness. Another part of ACT involves identifying your core values and letting those values guide your life.

According to Harris, ACT represents the following:

A—Accept our thoughts and feelings

The book is divided into five parts. In the first part, “Warming Up,” Harris debunks common myths about confidence and explains why we lack self-confidence. In “The Double-Edged Sword,” readers learn what to do with negative thoughts. Unlike other approaches, ACT doesn’t try to change negative thoughts or use positive affirmations; instead you learn that “negative thoughts are not inherently problematic.” It’s when we get caught up in these unhelpful thoughts and let them prevent us from reaching our goals that they become a concern. Here, Harris also shows readers how to handle these thoughts and be fully present using all our senses.

In “What Gets You Going?” Harris helps readers identify their values, which he says “play a major role in developing confidence and enhancing performance.” Knowing your values is the best way to achieve your goals. According to Harris, values provide the inspiration and motivation to follow through even when things get tough; values provide a sense of direction (akin to a compass); and they make life fulfilling.

In “Taming Your Fear” Harris explains how fear works and teaches readers to accept it and use fear to their advantage. Throughout the book, he lists a variety of confidence “rules.” In this section, he writes: “Don’t fight your fear; allow it, befriend it, and channel it.”

The final chapter, “Playing the Game,” puts it all together and underscores the importance of acting with confidence. (“The actions of confidence come first; the feelings of confidence come later.”) Harris also shows readers how to get unstuck, get motivated (it’s not what you think), rebound from failure and reach peak performance.

At times, Harris’s tone is preachy, and there are plenty of cliché statements. He also includes many breaks in the text to encourage readers to pause and pay attention to their thoughts and reactions to the material. Some readers will love these brief breaks because they offer another lesson in mindfulness; help you become more aware of your thoughts and how they affect you; and may be comforting and reassuring. Others may find them annoying and distracting. But, of course, you can easily just skip over those sections. Here’s an example:

Now, before we go on, I’d like you to pause for ten seconds and notice what your mind is doing. Just quietly listen in to that voice in your head and notice what it is telling you.

Is your mind getting annoyed or frustrated: “Oh, please, don’t tell me he’s going to go down that old ‘fake it till you make it’ path. I’ve heard that one before!”? Or is it predicting the worst: “Oh no. He’s going to tell me I just have to put up with these feelings of anxiety, grit my teeth, and force myself to do it!”?

If your mind is telling you something like the above, that’s perfectly normal and only to be expected; as we shall see later, the human mind has a natural tendency to predict the worst. So let’s take this opportunity to clarify something: I am not ever going to ask you to “fake” anything or to “put up” with unwanted feelings. Quite the opposite, in fact. Two important themes in this book are being true to yourself (as opposed to being “fake”) and handling fear in effective, life-enhancing ways (as opposed to “putting up with it”).