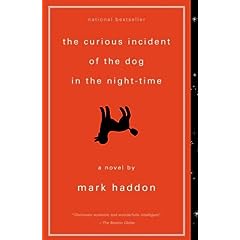 The Curious Incident of the Dog in the Night-Time

The Curious Incident of the Dog in the Night-time by Mark Haddon is, on the surface, a detective story. A detective story rather than another type of novel, because it is like a puzzle and can be solved rather than fanciful lies in other types of novels, and our first person narrator with an autism spectrum disorder can’t lie. Christopher doesn’t understand lies, metaphors or social psychology. Instead he is studying for A level maths. But, he reasons, he can write a book about trying to solve the mystery of who killed Wellington the poodle with a garden fork.

At first the police thought it was he who’d done it, and they approached and touched him so he hit them and was taken into custody, and the reader experiences this trauma as he does. But still, he doesn’t quite get it. “You didn’t mean to hit the policeman,” he is prompted, but he says that is a lie, he did mean to hit him because he touched him. But he agrees not to do it again, and is let go with a caution to his father.

Christopher (a British lad fifteen years and five months old) continues his log. He writes about school and his classmates in the Special Needs class. Some are more needy than others. His teacher Siobhan is patient and kind and explains things to him in a manner he understands, without using metaphors, without assumptions. His mother knew not to simply ask him to be quiet. He would ask her how long. Information must be specific and logical. Illuminating in a light neurotypical people aren’t used to seeing.

So orderly that patterns in numbers are always in his thoughts. He’s especially fond of working with prime numbers, but does all sorts of calculations throughout the book. They are both entertainment and a stress release for him.

He has also learned (along with subjects like Stranger Danger,) to count to 50 when angry, before hitting anyone. He also uses formulas as distraction and he is often detached, thinking about numbers. Social skills, however, are lacking, as shown by a common cognitive test he is given when young, but remembers perfectly.

Asked what’s inside a candy box, he says, “Candy.” The teacher opens it to reveal a pencil instead; it’s closed again and he’s asked the same question. “Pencil,” he says. Then he’s asked, if his mother came into the room just then, what would she say is inside the candy box? “Pencil.” This is a variation of the Sally Ann test often used in diagnosing autism. It shows a theory of mind deficit by the inability to consider another point of view. It is thought that in autism the inability to lie may stem from the inability to read other people.

Christopher tells us in this book that he didn’t understand “people having minds.” Now he sees them as puzzles to solve, but still not very accurately, and his functioning is quite impaired.

Socially, he doesn’t understand why he shouldn’t ask Mrs Spears, owner of the poodle, about the incident or why she got angry when he did. Or why he shouldn’t have let certain things slip to a neighbour (who lives across the street and one to the right, in his mental map). About his mother, who died of a heart attack a year ago. About Mrs. Spears and his father and their yelling. He doesn’t quite know how to experience sadness but although he doesn’t react appropriately to other people’s emotions, he does have an active internal emotional life. (In a later scene it’s expressed by vomiting.) He doesn’t know how to communicate it the same way as others. This is also one of the key points in the autism rights movement (which this book predates, there is no mention of it).

His father tells him to stop investigating, and he is given more specific instructions to not talk about the dog. He even tosses Christopher’s detective story manuscript into the trash bin.

What happens because of that is a turning point in the novel, which really is a finely crafted novel underneath the structures and math formulas that convey autistic traits. The author has compassion for Christopher’s experience as well as that of his caretakers. Emotions are actually quite passionate in this seemingly unemotional log file-type book. Haddon maintains a tense balance between order and chaos, while dipping into both. Ultimately it melds into a poignant statement about having an autistic child.

The Curious Incident of the Dog in the Night-time kept me curious throughout. It is a page-turner with puzzles within puzzles (beyond the math). The pacing, dialogue, and overall prose was excellent. It won a Whitbread Prize and the Los Angeles Times Book Prize for First Fiction when first published. It’s still worth your time to read this story, five years later. Fantastic book.

The Curious Incident of the Dog in the Night-Time

APA Reference
Kiume, S. (2016). The Curious Incident of the Dog in the Night-Time. Psych Central. Retrieved on August 7, 2020, from https://psychcentralreviews.com/2016/the-curious-incident-of-the-dog-in-the-night-time/