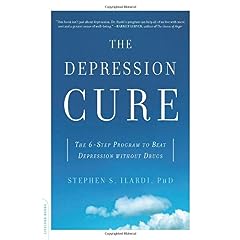 Upon reading Stephan Ilardi’s book The Depression Cure, a quote from Chuck Palahniuk’s book Fight Club continued to pop up in my mind. In one chapter, a character by the name of Tyler Durden explains to the narrator that “We are a generation with no great war or great depression. The war we are fighting is against ourselves and our great depression is our lives.”

In essence, we are our own worst enemy, and despite the marvels of modern science and new-era technology, we are constantly generating new ways to render ourselves obsolete. Modern times have forced us to give up our minds and bodies to the zombie-inducing effects of television and the Internet, our lives enslaved to wonderful gadgets and gizmos that are meant to make life easier, but instead seem to be bringing us down. Ilardi mentions that “human beings were never designed for the poorly nourished, sedentary, indoor, sleep-deprived, socially isolated, frenzied pace of twenty-first-century life.” The lifestyle Ilardi speaks of has left many battling bouts of severe depression, but in this book, he has truly concocted “the depression cure.”

Using the TLC (Therapeutic Lifestyle Change) program that he established at the University of Kansas, with the help of graduate students, Ilardi illuminates six steps to breaking the habits of our fast-paced lifestyle to ensure that we remain healthy in mind, body, and soul. It is a method of defeating depression without the use of medication. Instead, Ilardi insists, through much research and case studies of real people suffering from different forms of depression, that the use of “dietary omega-3 fatty acids, engaging activity, physical exercise, sunlight exposure, social support, and sleep,” combine to create the healthiest cure for this disease.

Ilardi tells the story of how, while teaching a class on abnormal psychology, he asked his students “What’s the most effective treatment for depression?” The unanimous answer was “antidepressant medication.” The idea that medication is the first idea for treatment of any type of illness and disease is another problem prevalent in today’s society. It is almost as if humanity has increasingly become complacent with the fact that we are powerless over everything that goes wrong in our lives, so when it does, the first thought is to get a prescription for the “flavor of the week” drug to make all our pains and emotions go away. Essentially, we are only numbing ourselves to the point we are not functioning at the capacity we should, while some are simply trading away one problem for another, such as addiction.

The biggest question Ilardi poses — the same thought that spearheaded the creation of the TLC program — is with the increased use of antidepressant medications and life-simplifying technologies, “How can people possibly be so much more vulnerable to depression now?”

According to Ilardi, the answer lies in the dynamics of our culture and how our roles as humans have changed over generations. Speaking more in terms of Americans, we have turned our backs on the “hunter-gatherer” tendencies that humanity was based on. Mentioned many times throughout The Depression Cure is the modern-day hunter-gatherer band known as the Kaluli people of the New Guinea highlands, where “clinical depression is almost completely nonexistent.” Their culture still works as a cohesive unit of purpose, for survival. They obtain their physical activity through hunting and gathering, are constantly exposed to the outdoors and the elements, abide by a strict diet based on seasonal availability, and are never alone due to their constant involvement with their community. The Kaluli people lived the steps of Ilardi’s TLC program, and because of that lifestyle, depression was rarely an issue.

This speaks volumes of what The Depression Cure brings to the realm of psychology and the ability to live a happy and healthy life. The six steps that Ilardi discusses may seem simple, but who truly takes the time to worry about their diet, fitness, social interaction, and sleep patterns? Perhaps everyone does think, or ruminates, as Ilardi declares to be another roadblock to happiness, but not everyone takes the time to actually do something about it. With all the advantages of living in this modern age, most of us are afforded the options to just forge on in our lives in a walking coma, believing we either own or have achieved all that life has to offer. At the same time, we are ignoring the true needs of our bodies and minds, thus leading to depression.

The Depression Cure is truly enlightening, and Stephen Ilardi’s TLC program is something that should not just be thought about, but utilized as a tool for a healthier way of life. Most important, everyone — not just those suffering from depression — should use this program. If you follow the six steps that Ilardi explains in great detail and read the case studies that prove its success, you will not only find your life fuller with happiness, but may actually prevent the onset of future depression. The Depression Cure is a must read and a book that should be read outside of the house, on a sunny day off from work, surrounded by nature, and in the company of a great companion.

4 Ways a "Narcissist" Gets the Upper Hand