Reviews Home » Disorders » Depression » The Depths: The Evolutionary Origins of the Depression Epidemic 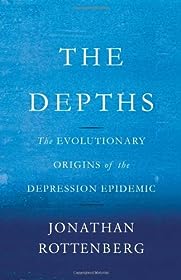 At some point in nearly everyone’s life, depression will strike. Whether it comes through the grief of losing a loved one, the loss of a job and subsequent financial difficulty, or something else, depression, whether mild or severe, is a part of the human experience. In Johnathan Rottenberg’s new book, The Depths: The Evolutionary Origins of the Depression Epidemic, he describes depression, its causes, its duration, its the evolutionary origin, and some possible coping mechanisms.

Rottenberg argues that while depression is, decidedly, a relatively common human experience, other mammals also experience low moods. The difference, says Rottenberg, is that humans are able to articulate and communicate their experience to others. Another feature that deserves mention is that depression appears disproportionately overrepresented in Western, particularly American, culture. Rottenberg embarks on a compelling discussion where he summons words from The Declaration of Independence, citing the requisite pursuit of happiness as part of what Americans consider their entitlement, and, more importantly, a hallmark of success. This, he suggests, is evidence of the powerful Western drive to obtain and strive for the ephemera of happiness. But what is happiness? And is it realistic to expect that humans are designed to cheerfully frolic throughout life sans adversity, pain, loss, or any of the other inevitable challenges that compose of our existence?

To that, Rottenberg replies with a resounding no. Not only does research suggest that intense happiness fades quickly after being achieved, a phenomenon called hedonic adaptation, but, he writes, “hedonic adaptation and our unattainable cultural imperatives make for a cruel combination.” So, where do go from there?

Rottenberg suggests that some degree of low mood is essential in the human experience, and in some cases, that low mood leads to better, more realistic decision-making. He isn’t suggesting that a perpetual state of mild depression be our gold standard by any means; instead, he seems to suggest that the relational state of low vs. high mood is part of what balances us out.

From an evolutionary perspective, the unsteady mood brought on by anxiety and stress about an upcoming board meeting would be of equal benefit to the bicameral man on the savannah. It would keep that man up at night, on guard against big cats and other potential predators. However, in modern society, that same adrenalin-induced sleeplessness typical of the fight-or-flight response results in grogginess, increased stress, and what seems to eventually manifest as a mildly depressed state.

Rottenberg spends time discussing how important it is to better understand and address mild depression. Traditionally, attention has been paid only to those cases of severe or clinical depression, but Rottenberg suggests that mild states are equally important and deserve more in-depth exploration.

The end portion of the book goes into the stages of recovery, again emphasizing the importance of realistic expectations. There is a section on the pros and cons of antidepressant use, behavioral therapy, and other intervention methods.

Perhaps most moving about this book is that Rottenberg has personally experienced what he terms a type of depression that “nearly swallowed me whole.” He approaches the study of depressive illness from a standpoint of someone who has endured each stage, understands the medical and scientific arguments for those stages, and has firsthand experience of an array of treatment interventions. He does this without launching into a traditional self-help prescriptive voice and manages to maintain an analytical, though easy-to-understand tone throughout the book.

Fittingly, the final chapter is on the glory of recovery. It is here that Rottenberg shares his most personal experiences with the illness and gives hope to readers about shedding, and staying free from, the “concrete dress” of depression. He leaves us with the thought of listening to and trying to make sense of our depression.

Rottenberg leaves a few minor stones unturned, though makes no claims that his intent is to fully explore all aspects of the depression epidemic. There is less of a focus than I had hoped on the evolutionary ties, but those scientific references that Rottenberg does provide are satisfying enough from a purely summative perspective.

He also does not fully explore neurological functioning or cultural differences. My assumption, however, is that Rottenberg intentionally neglected to go deeper into the the neurological aspect as way to tacitly suggest that we should listen to our moods rather than medicate our neurotransmitters. And the cultural aspect alone would make for a remarkably interesting, and incredibly valuable, analysis, one I hope Rottenberg tackles in the near future.

Overall, this is a surprisingly accessible book and one that would serve any layperson well as an introduction to the science of depression. Rottenberg’s practical style and talent for using real-world examples by real-world people to illustrate states of low and high mood is refreshing. While not an in-depth tome by any means on depression, treatment, or evolutionary origin, the book is a wonderful first step for those who wish to better understand the illness from a scientific viewpoint. And it gives the reader hope by suggesting that depression is a common, albeit painful, human experience: that a low mood does not mean we have failed.

APA Reference
McCann, K. (2016). The Depths: The Evolutionary Origins of the Depression Epidemic. Psych Central. Retrieved on January 19, 2020, from https://psychcentralreviews.com/2016/the-depths-the-evolutionary-origins-of-the-depression-epidemic/