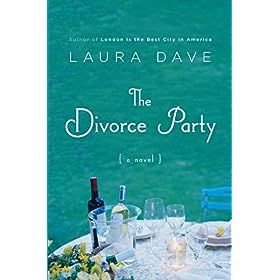 I enjoy reading anything by Laura Dave; I find that her characters embody a perfect blend of endearment and fault that really make them human. Dave does not disappoint with The Divorce Party, an entertaining novel that provides valuable insight about the nature of relationships.

Gwyn and Thomas are toasting to the end of their marriage by hosting a celebration at Huntington Hall, their fit-for-a-postcard home in Montauk, Long Island that’s been in the family for generations (a home that even survived the Great Hurricane of 1938).

Paralleling the decline of a 35-year marriage is the storyline of another couple, who are embarking on a different journey. Gwyn and Thomas’s son, Nate, currently lives with his fiancée, Maggie, and he’s bringing her back to his childhood town and ocean-front house to meet his parents for the first time — at their divorce party, no less.

The Divorce Party delves into the intricacies and complexities of characters who harbor secrets.

“I had two main characters — a woman struggling to begin a marriage and another trying to gracefully end hers — both asking the question: how hard should I fight for the person I love?” Dave said in an interview on Examiner.com. “It was very rewarding to see them both find the answer to the question that was ultimately going to lead to their happiness.”

What I personally found interesting is how both father and son were not happy with their past, and while they tried to “start over,” they expressed this need very differently; all at the cost of the women they loved. Thomas tried to fill a void he couldn’t fill for himself, yet, Gwyn suspects that even his idea of beginning anew can’t save him.

Meanwhile, Nate didn’t disclose a very important part of his story to his soon-to-be wife, which Maggie uncovered during her visit to Montauk. Like Thomas, Nate was also looking for a clean slate; however, he chose to confront himself and his prior experiences, wishing to preserve his current relationship. He wants to accept that air of responsibility and dig deeper within himself. It’s a lesson his father may long to learn as well.

An interview with the author that was posted on the Printasia blog site discusses the message that Dave wants the readers to understand — she wants them to walk away with the theme of forgiveness in mind. Instead of finding a sense of failing in forgiveness, she focuses on its strength.

“I believe that there is no weakness in forgiveness,” she said. “But we are conditioned these days to think that there is, that the brave thing is to move on when someone disappoints us,” she said. “It makes it hard to make a relationship work, if the premium’s as much as leaving as it’s on figuring out a way to stay.”

With an eye-opening view of the inner workings of relationships, Laura Dave’s The Divorce Party is definitely a page-turner and a recommended read.