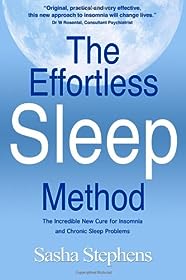 I’ve recently read a book which claims to cure insomnia. One of the main points it makes is that there’s no such thing as insomnia. Some may be tempted to hurl it at the wall at this stage; however, I persevered and I’m now almost totally cured and utterly convinced that it makes sense.

Author of The Effortless Sleep Method, Sasha Stephens, is at pains to explain that she’s been there and got the T-shirt. She talks about her fifteen-year battle with insomnia, and her desperate search for a cure. Finally she began to understand that sleeping problems are perpetuated mainly by a fear of not sleeping.

My own problem began when I became a parent. Things were fine for the first six weeks of my son’s life. He slept in a crib next to me and woke often for a feeding, as expected from a newborn. I fed him and fell asleep easily. But things gradually began to change. The rare occasions I couldn’t drop off between feedings became more frequent until it happened every night. Sometimes I would only get two or three hours’ sleep, and stumble around baby groups like a zombie, forgetting everyone’s names.

We moved Ben to his own room and eventually he started sleeping through the night, but things didn’t improve for me. I tried everything. After a lot of soul-searching I chanced upon this book, and was glued to it from the first chapter.

The basic message I got from the book was a reassurance that there was nothing intrinsically wrong with me, or my lifestyle, except that I had fallen into the habit of worrying about not sleeping. And even though I often wasn’t thinking about it consciously at night, I’d be much too aware of the feeling of being about to drop off, and would notice it, which interrupted the flow and then I’d be wide awake again.

Stephens writes persuasively that the body and brain do want to fall sleep, nothing’s “broken,” but your mind is just that bit too anxious or aware to drop off. Then she outlines a range of techniques to break that pattern.

Although focusing mostly on the thought patterns that maintain sleep problems, she also encourages the reader to follow six basic “sleep hygiene” rules:

Then the more psychology-based rules:

Following Stephens’s suggestions I’ve changed my attitude from feeling panicky at bedtime to feeling much calmer. I’m sleeping almost normally now, and staying calm on the rare nights when I do lie awake. I’d recommend that anyone developing a similar problem reads this book as early as possible.