Reviews Home » Disorders » Schizophrenia » The Fog of Paranoia: A Sister's Journey through Her Brother's Schizophrenia 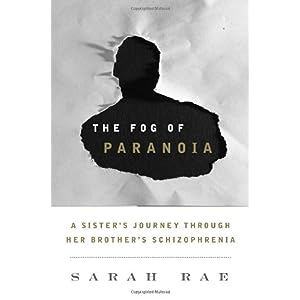 The Fog of Paranoia: A Sister's Journey through Her Brother's Schizophrenia

When a loved one develops a mental illness, we sift through the sands of memory looking for clues. Running our hand through the fine grains, we examine past events, vague memories, comments made in passing. As we home in on a recollection, we ask ourselves: Was this the moment we knew something was wrong? Or this one? Or this? We look for the before and the after. Because in the after, so much has changed and will never go back.

In The Fog of Paranoia: A Sister’s Journey Through Her Brother’s Schizophrenia, Sarah Rae shares with us not only the sifting through the memories of growing up with her brother and the slow uncovering of his schizophrenia, but also the transition to the after — of living with a sort of survivor’s guilt and moving on with her life while still supporting her sibling. Whether or not you have personal experience with mental illness in your loved ones, the book is an honest and revealing memoir of one family’s struggle.

As goes the beginning of many stories, Rae writes, “We were normal. We started out normal.” Two years younger than her brother, Pat, Rae looked up to him. While she tended to be quiet and reserved, Pat was a bright, extroverted boy who was not just her brother but also her friend and confidant.

Just like anyone else living an apparently normal life, they had hopes and plans for bright futures. During their adolescence, Rae notes, “Our paths were becoming clear. I would be an artist, a writer. Pat would be a guitarist, a lover of big ideas, and maybe even a teacher.”

Soon, though, Pat began to change. Once a “social butterfly,” he became more reserved, then reclusive. He perceived innocuous conversations among strangers or co-workers as being about him. As his paranoia grew, he felt spied upon everywhere he went — by hidden cameras and nosy neighbors. He became unable to hold a job. He lost friends.

Rae depicts the struggles to find a diagnosis and establish appropriate care, a problem quite common in today’s health system. She tells not just the story of her brother’s descent into schizophrenia, however, but rather the tale of the whole family. In fact, Rae reveals, it was not Pat who first dealt with mental illness, but rather Rae herself.

Though she describes them both as “starting out normal,” Rae in fact suffered from severe depression. She writes that she even attempted suicide several times, the first instance at age twelve. Through multiple overdoses, she recalls, her young self hoped that “one day, death would scoop me up in its arms and take me away from the pain.”

I appreciated her honesty, especially when she describes what it was like to go from the sibling with issues to the relatively stable one. Rae writes that she has refrained from the temptation to “pass myself off as the perfect sister next to the somehow ‘imperfect’ brother,” saying instead, “I think it’s important to uncover the things we have in common, the frustrations we may both have felt growing up. Besides, without Pat, I might never have gotten through it.” This is not only a glimpse into Rae’s own struggles, but the larger fact that mental health is not static.

“When a loved one suffers from schizophrenia,” Rae writes, “everyone loses something different, whether it was a best friend, a confidant, a sociology tutor, a ray of sunshine, or a dutiful son.” Her book is a testament to that loss. It is also a reminder that, while there may be no miracle cure or easy answers, there can still be moments of connection.

“Without stories shared by other families like mine,” Rae writes, “I don’t think I could have made it through the grief, the anger, or the confusion to a certain acceptance that, while Pat will never be cured, he will always have me.” Now, with The Fog of Paranoia, Rae has added her own story so that others might know they are not alone.

The Fog of Paranoia: A Sister’s Journey through Her Brother’s Schizophrenia

The Fog of Paranoia: A Sister's Journey through Her Brother's Schizophrenia

APA Reference
Riddle, M. (2016). The Fog of Paranoia: A Sister's Journey through Her Brother's Schizophrenia. Psych Central. Retrieved on November 25, 2020, from https://psychcentralreviews.com/2016/the-fog-of-paranoia-a-sisters-journey-through-her-brothers-schizophrenia/